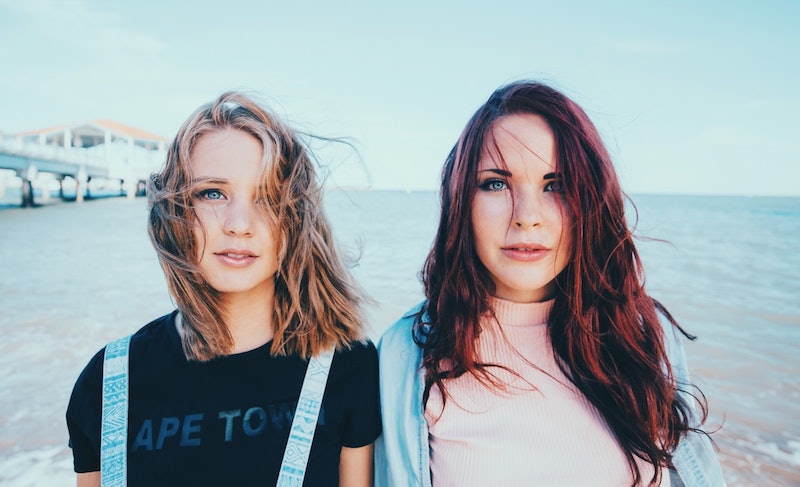 In your 20s a lot of extreme behavior can seem completely normal — the drinking, the partying, the high-octane emotions and stress. This time of life, characterized by upheaval and change, can make it especially difficult to tell when certain behaviors cross the threshold and become symptoms of mental illness. If a friend has been acting erratically, suffering from mood swings, depression, or impulsive behaviors, they may have borderline personality disorder (BDP).

This illness, first listed in the Diagnostic and Statistical Manual for Mental Disorders, Third Edition (DSM-III) in the 1980s, is surprisingly common. It affects 5.9 percent of adults (approximately 14 million people) in the US, with three million cases reported each year — and the number of diagnosis seem to be growing.

Unfortunately, the name "borderline personality disorder" is a bit of a misnomer (what is this border that the personality is crossing anyway?). BPD, which is marked by unstable moods, behavior, and relationships, can be extremely hard to pinpoint. It usually develops during adolescence or early adulthood (around age 18 through 25), and has been misunderstood and under-diagnosed. It is often confused with bipolar disorder as both conditions are characterized by unstable moods. However, with BPD mood changes happen in shorter intervals than bipolar disorder — a few hours or days, versus weeks and months.

Around 85 percent of people with borderline personality have other issues which may complicate the diagnosis and treatment. According to the National Education Alliance, women with BPD may also suffer from chronic depression, anxiety, or eating disorders, whereas men are more likely to have antisocial personality disorder, and substance abuse is a common issue overall.

Harriet Williamson, a 24-year-old mental health ambassador, described in a video for the BBC what it is like to live with BPD: “Sometimes it feels like I’m on an emotional rollercoaster that I can’t get off.” The intensity of the negative feelings can be very frightening, she says, and that additionally, “fear of judgement is very, very real. You have to choose the people that you tell carefully.” If you have a friend who may be suffering from the disorder, their symptoms will affect you too. Discussing mental illness may seem taboo, and as a society we are still fighting the stigmas attached, but it’s important if possible to encourage them to take steps towards treatment.

Dialectical Behavior Therapy (DBT) which relies on teaching skills to control intense emotions and reduce destructive behavior, and incorporates zen and mindfulness practices, is considered the best treatment option at the moment. BPD is difficult to treat as it manifests on an interpersonal level, affecting how one sees the world and themselves. Medications can be used to treat concurrent biological issues, but no medications have been approved by the U.S. FDA to treat BPD alone.

If you suspect a friend may be dealing with this, check out the list of symptoms below. If you notice that their pattern of behavior matches five or more of these criteria from the DSM-5 they may have BPD.

Drastic reactions to real or imagined abandonment is characteristic of people dealing with BPD. They may be panicky or depressed over the smallest instances of separation such as business trips or vacations.

A person with BPD will have very intense and fraught relationships with their family, friends, and loved ones. They are prone to "splitting" — thinking in extremes (someone is either "all good" or "all bad"). Sometimes if you are hanging out with this friend, you may feel like you are walking on eggshells even when you are having a good time. If you have a friend who is frequently changing between idealization ("You're my best friend! I love you!") and devaluation ("You're a b**ch. I hate you!") that may be a warning sign.

3. Unstable Self-Image Or Sense Of Self

People with BPD may not see themselves clearly. They may have career goals and life plans that are always changing, and at the same time will criticize themselves excessively for it. Many people suffer from low self esteem and need time to "figure themselves out," but this is also very common in people with BPD.

Does your friend make spur of the moment decisions or engage in risky behaviors without thing of the consequences? An impulsive friend can seem fun, and bring you on wild adventures, but if their spending, drinking, and sexy times get out of control it can be dangerous for everyone.

5. Suicidal Behavior Or Threats Of Self-Harm

If your friend threatens or shows signs of self-harm (such as cutting), they should get immediate help. According to the National Institute of Mental Health, "as many as 80 percent of people with BPD have suicidal behaviors."

If a friend is experiencing intense feelings of anxiety or irritability that last from a few hours to a few days it could be more than just worrying about that big presentation at work. Ask yourself: when things get stressful between your friend and another person do they get panicky and tense? Are they frequently fearful of uncertainty, of losing control? Do they spend time worrying about the past or obsessing about possible problems in the future? Many people suffer from anxiety, but if you answered yes to most of these, it may be a sign of BPD.

7. Chronic Feelings Of Emptiness Or Boredom

This goes way beyond "home on a Saturday night and there's nothing on TV" boredom. These feelings can manifest in many different ways. It doesn't have to be a Camus style ennui — your friend can also feel a nagging emptiness akin to that they don't know who they are or what they're meant to do with their lives.

8. Intense Or Inappropriate Flaring Up Of Anger

Intense emotions like anger can be overwhelming and sudden in someone with BPD. Even a seemingly small thing can trigger yelling, or even physical fights. Don't write these off as a bad temper or PMS too quickly.

"If I'm experiencing a severe episode, I can lose touch with reality in a way, and I don't feel in control of what I'm doing at all. And those periods are very frightening," Harriet Williamson described to the BBC. If a friend describes moments of feeling cut off from her body, removed from her actions, or observing herself from outside her body this could be a clear sign of BPD.

If your friend's actions align with these symptoms you should encourage them to seek help. Dr. Carol W. Berman, assistant clinical professor of psychiatry at NYU Medical Center, writes in the Huffington Post, that when dealing with a friend who may have BPD, "The most important tool is not to internalize the person's behavior, or take it too personally. Remember it's not about you. People with borderline personality disorder aren't fully aware of their behavior and the effect on other people." To be a good friend you have to protect yourself and your emotions. Just because you set boundaries with your friend, doesn't mean that you can't still be sympathetic and support them going forward.