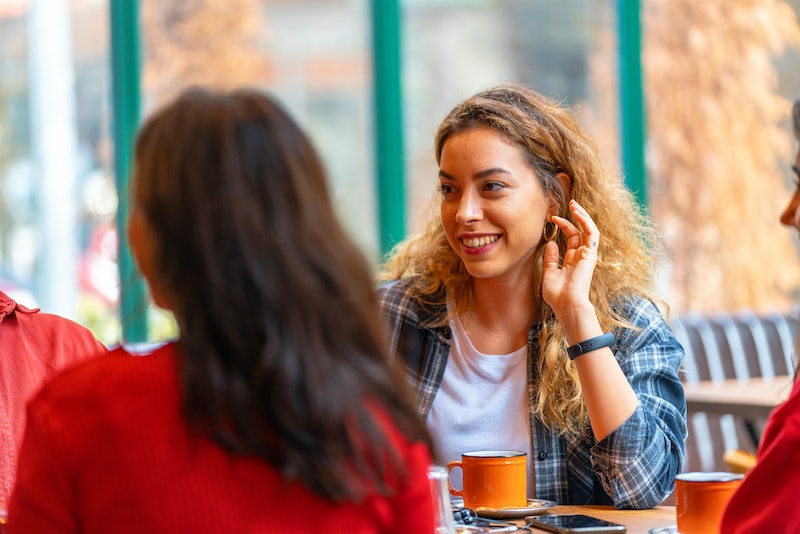 "Toxicity" is a term most often used to describe relations within families, but it isn't limited to that: other close relationships, like friendships, can also be toxic. Toxic best friends can be seriously big sources of stress — one minute, it feels like you two are bonded as closely as people with two different genetic codes could be; the next, you're feeling inexplicably low, unsteady, drained, and miserable due to interacting with them. It's an exhausting cycle, but a very common one within toxic friendships. In general, toxic friends use you for what you can offer, rather than appreciating you and engaging in mutual emotional support.

There's rarely any public discussion about how to be a good best friend. We all know the major ground rules — listen when your friend has had a bad day, treat them extra-kindly when they're going through a breakup, don't hook up with their partner — but there is little conversation regarding how to identify a truly toxic friendship, where one friend seems to want power, and the other is expected to be a subordinate to their needs.

Here are nine ways to tell if a best friend is actually toxic. If you find that a friend is toxic, it's your call as to whether or not you should maintain the friendship — but know that you don't deserve to be treated this way.

1. Their Emotional Needs Always Take Priority Over Yours

The key feature of emotional toxicity in relationships of any kind is that the toxic person's emotional needs are assumed to take absolute preference. They're having a bad day? Then you need to drop everything right now and comfort them. They need support? You're expected to talk them through their problem on the phone for as long as it takes, no matter what other responsibilities you may have. If they interpret a situation as you dissing them, ignoring them, or being in any way emotionally hurtful, good luck talking them out of it; they're emotionally myopic. And good luck insisting that anybody in your life is more important than them, because you should always put them first, even if it means de-prioritizing your own goals.

2. Your Own Emotional Needs Are Neglected

Sure, they'll likely turn up for birthday parties or whatever. But when it comes to the crunch, toxic best friends are not going to give you the same attention they demand for themselves. It's a fundamentally unequal relationship and you'll probably also find your emotional situation criticized or downplayed, so that they can keep focus on them. Susie Miller at the Huffington Post refers to this as a "marathon of your effort, " and it's not meant for you to win.

3. They React Incredibly Poorly To Criticism

Honest evaluations of how the friendship is going are not possible with a toxic best friend. Any kind of attempt to get them to shift their behavior turns from a discussion into a conflict; they may be passive-aggressive, sulky, full-on aggressive, dismiss your concerns, or promise the world and altogether fail to deliver. Their main ambition is to keep you in a position where you give them what they want — not to get the friendship to a healthier place.

4. They Violate Your Boundaries

Boundary-crossing is the hallmark of toxicity. Calling when you've asked them not to; asking you to do something you'd really rather not; discussing stuff you've put out of bounds; whatever it is — if you've laid out a line, they're likely to ignore it. And it indicates disrespect for your own needs and expressed preferences, in favor of doing whatever they want. The conflict resolution expert Jessica Valencic refers to this as "not being honoured" in the relationship: not having your preferences and limits valued or respected.

5. They're Subtly (Or Not So Subtly) Competitive

Toxic friendships often have an undercurrent of envy or rivalry running through them. It may not even be conscious; the jostling may be seriously subtle, like aggressively playing up their professional achievements on social media, even if they also laud yours. In some cases, it won't be subtle at all — if somebody complains that you've stolen "their day" because something awesome happened to you when the spotlight was supposed to be on them, chances are they're toxic.

6. They're Masters Of The Put-Down

Toxicity is often bound up in criticism and insults. Toxic people sometimes cover up this tendency by pushing the idea that they are being "fun" or "just joking," so that the person being targeted feels like it's their fault for being offended. It doesn't have to be massive trash-talking, either; putting you down while appearing to stand up for you ("god, that dude is not good enough for you, why did you pick him?") is a pretty toxic signal.

7. You Feel Unable To Extricate Yourself From The Friendship

Toxic friends bind themselves to you. They know how to manipulate you into giving up your time, attention, money, and whatever else they want, by using guilt, overt affection, emotional punishment or whatever else they've got up their sleeves. If you feel seriously trapped by a friendship, it's a good sign that something is drastically wrong.

8. Their Expectations Of Your Behavior Are Unclear

This is a peculiar one to explain, but it'll be familiar to anybody who's experienced it. They may get angry, offended, or sulky because you've done something "wrong," but the list of things that are potentially "wrong" will be unclear, often shift, and keep you perpetually on your toes. No solid rules appear to be present, but when you cross a line, they definitely let you know it.

9. The Relationship Provides Stress, Not Support

If your primary feeling when a friend's name comes up on the phone is dread, guilt or misery, it's a toxic friendship. Suzanne Degges-White over at Psychology Today attributes these feelings of dread to intuition that the toxicity is negative, and says we should listen to it.

As we've covered, it can be excruciatingly hard to get out of a toxic friendship, because serious friendships are intimate and involve a lot of emotional knowledge, which a toxic BFF can use against you for their own benefit. That's not to say there aren't good moments; if your toxic mate is getting what they want, they're likely sweet as pie. But assessing a toxic friendship often brings to light a very skewed balance sheet, a lot of wasted emotional effort and hurt feelings, and a sense of hopelessness.