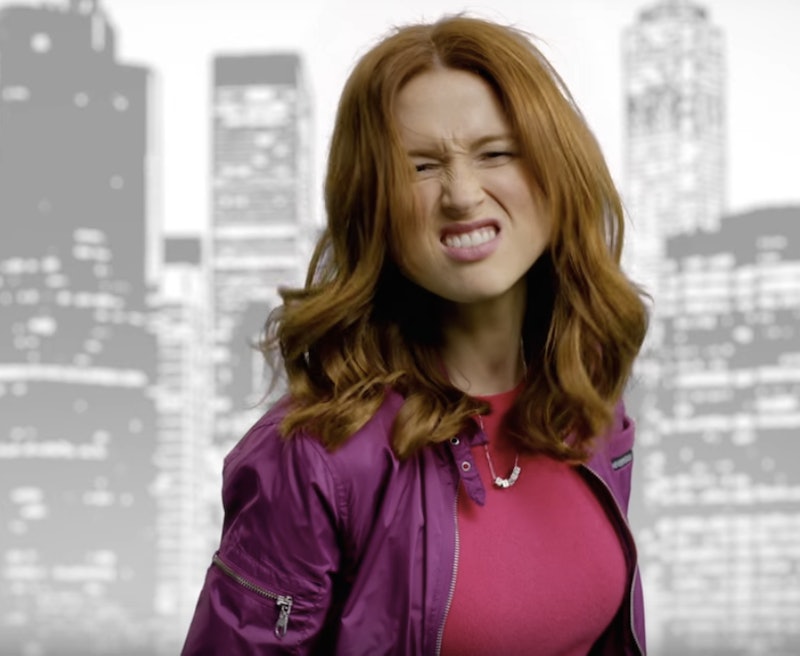 Normally I get annoyed when characters from my favorite shows don't learn anything in between seasons (Hannah Horvath, table for one?), but, in the promo for The Unbreakable Kimmy Schmidt Season 2, I've never been more delighted to see a character come back for a second round just as clueless as they were when we were first introduced. I guess I shouldn't be that surprised, given that the entire conceit of the show is that Kimmy, played by Ellie Kemper, spent many of her formative years literally underground in a cult, and therefore knows very little about the outside world. However, shows have fumbled concepts less elaborate than that one, so I was holding my breath a bit. That'll teach me to doubt Tina Fey. But, given that this whole teaser is just 30 seconds long, you might be wondering how I know that Kimmy hasn't miraculously wised up in her time away from us?

Well, for one thing, her killer, brightly-colored outfit. But another clue is in the brilliant way that the teaser is structured. We see Jane Krakowski, Kemper, and Tituss Burgess strutting toward the camera as their characters Jacqueline Vorhees, Kimmy, and Titus Andromedon, respectively, while little blurbs interrupt the footage. And herein lie the clues. The first one is "Hashbrown No Filter," which means that Kimmy still doesn't understand social media, god bless America.

Then there's "Peeno Noir Caviar," which means that our boy Titus is up to his old tricks as well, and finally "Stranger Danger Ranger," because... well, I don't know why. That's a mystery we'll all have to solve together on Apr. 15, when Season 2 premieres on Netflix.

The look that Jane Krakowski gives Ellie Kemper after she throws that handful of confetti! It just shows Jacqueline's utter disdain for how little Kimmy has progressed in her time outside the bunker, and I couldn't be happier to see it. It's her beautiful, simple world, and we're just living in it. Never change, Kimmy. Never change.

More like this
Does Umbrella Academy Season 3 Have A Post-Credits Scene? The Answer Will Surprise Fans
By Brad Witter
Vecna Officially Has A Fan In 'Stranger Things' Star Jamie Campbell Bower
By Alyssa Lapid
Yes, Joseph Quinn Is Actually Playing The Guitar In This Epic 'Stranger Things' Scene
By Alyssa Lapid
These 2 Tragic ‘Stranger Things’ Finale Moments Were Improvised By The Actors
By Grace Wehniainen
Get Even More From Bustle — Sign Up For The Newsletter