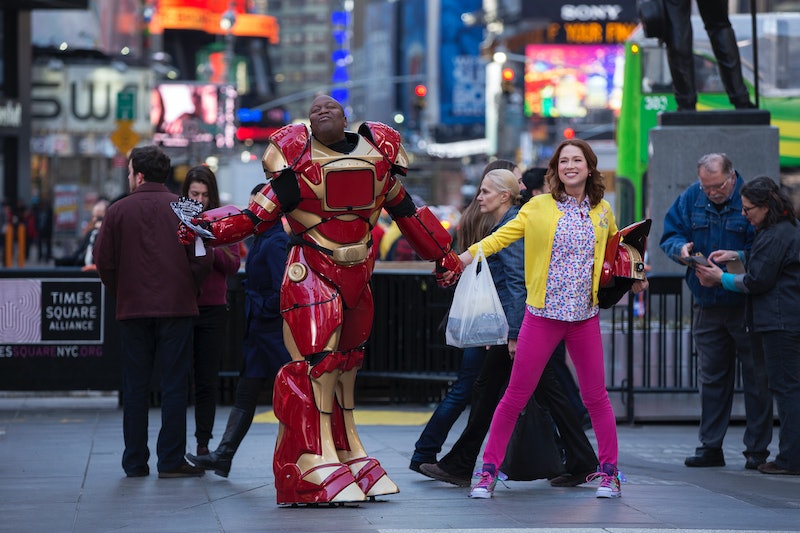 For those of you who haven’t seen the show, really? Get on it. But if you need a refresher, Ellie Kemper plays Kimmy Schmidt, a woman who was abducted 15 years ago by a crazy preacher named Richard Wayne Gary Wayne. He had his own Doomsday cult and kept Kimmy and three other women in an underground bunker. When they are broken out of the bunker, she opts to stay in New York City, where no one knows her story and she can live her sunny, carefree life. She finds a job (and a wacky boss), a roommate (and a wacky landlord), and a few love interests. It’s all put together by Tina Fey and Robert Carlock, aka the creators of 30 Rock, so you know there will be amazing cameos and totally quotable lines.

There’s no word yet on when Season 2 will be available for viewing (boo), but the series first hit Netflix on March 6, 2015, and since Carlock told Entertainment Weekly that they're "aiming for spring of ’16," it's likely the next season will become available at a similar date. In an interview with The Nerdist, Carlock also gave some insight on what we can expect when the show does return.

One of the fun challenges of doing the show is not letting Kimmy stop being Kimmy, that she has to keep that strength and optimism and also the fun of that naivety, and I think those things communicate with each other. So Season 2 is about her continuing to open up to the world and recognize moral relativism.

What else could happen in Season 2? I have a few demands — I mean, hopes.

Their road trip at the end of Season 1 had so much potential. I would watch a whole film with Lillian and Jacqueline driving across the country and talking about nothing.

Titus Sings All The Time

In real life, Tituss Burgess is a Broadway singer, and though his character already had that epic “Peeno Noir,” I still want even more! He needs to sing his heart out all the time, preferably with a comedic undertone.

Lillian Gets A Love Interest

Lillian has talked about losing past loves, so what if she found another one? Or just someone to date in general? I’d love to see how batty the landlady acts when she’s in love.

Kimmy’s bunker BFF, Cindy, is all set to marry Brandon, but what if she didn’t? What if she moved to New York and moved in with Titus and Kimmy? That’s comic genius.

Richard Wayne Gary Wayne Has A Wife & She Wants Revenge

I won’t spoil who RWGW is (because it’s my favorite cameo of the season), but what if he had a wife? Now that her husband is in jail, maybe she’ll want revenge on Kimmy and the other bunker women for putting him in jail.

No matter what happens, I totally can’t wait for Unbreakable Kimmy Schmidt Season 2 to start. They alive, dammit!