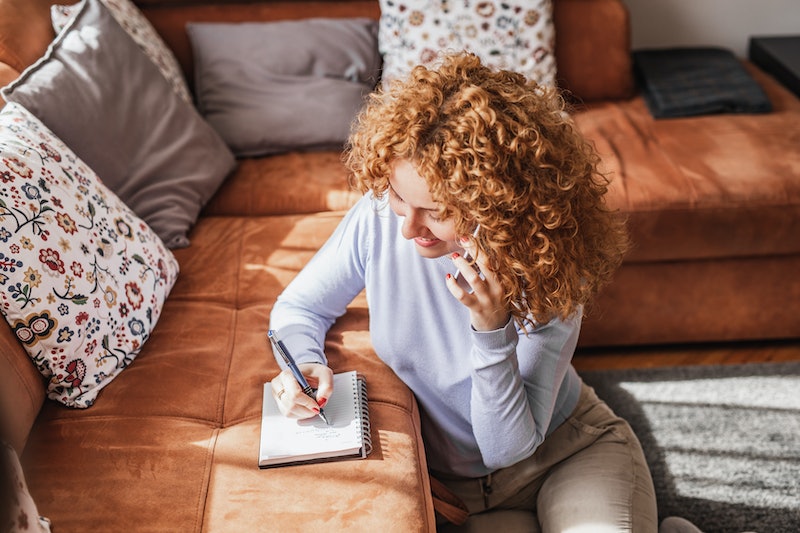 Every now and then, you may have a negative internal monologue with yourself without you even realizing it. It can be hard to stop this thought process, but it's so incredibly important to try not to be so critical of yourself and to accept yourself for who you are, because it's totally possible with a little bit of work. You'd be surprised how your thoughts can be a powerful tool when you try to think more positively.

Your thoughts have the ability to motivate and push you forward, so don't let them bring you down or distract you when you're trying to do your best. Even when a situation doesn't go exactly the way you want, you should try to switch your thinking around to be more useful, rather than critical. There's more to life than beating yourself up or thinking irrational thoughts when you could be using your self-criticisms to help you be more productive. It's time to make a change — and it might be easier than you think. Taking control of your negative cognitive behavior is the first step to making your life a lot better, because once you learn how to silence your inner critic, that energy can radiate out into the world and others can take notice. Here are a few tips on how to get there.

1. Change Your Motivation To Be Positive

Let your inner voice be driven by your passions instead of your fears. Most of the time your inner critic is directed by negative emotions like fear of failing or not meeting your own high standards. According to Fast Company, Dr. Elizabeth Lombardo, psychologist and physical therapist, said, "When you have a more positive motivating force to help you excel, you don’t need the inner critic." If everyone you care about is telling you positive affirmations to help you succeed in life, why are you allowing negative emotions to be the driving force in your head?

2. Ask Yourself: Would You Say These Thoughts To A Friend?

Instead of beating yourself down by talking negatively because something didn't go the way you planned, try to reverse your thinking and ask yourself: Would you say any of these thoughts to your friend? The answer is probably no. According to Forbes, you're more likely to give your friend compassionate advice when they ask for it. You would never tell them that they're not good enough or to give up on their dreams. Treat yourself the same as you would a friend. You deserve compassionate words, too.

It can be hard to visualize how dangerous your thoughts actually are when you are saying them to yourself. Next time you have a negative thought, stop whatever you're doing and write it down. Once you have physically written the words out in front of you, you might realize how ugly the thought actually is. According to PsychCentral, art therapist Lucia Capacchione, said, "By writing down what your inner critic says, you expose it for what it is: a bully who has nothing but negative things to say about you, your dreams, goals and abilities." Don't let you bully you. You know you're better than that and are capable of truly great things. If you stop yourself from going after your dreams because you don't think you're good enough or you're not ready, then you won't accomplish anything at all.

4. Use The Ten Year Test

A lot of the things you criticize yourself about really won't matter in the next few years, but sometimes it's hard to realize that when you're caught up in the moment. According to INC., entrepreneur Nelson Wang suggests to use The Ten-Year Test. Essentially when you're feeling down and stressed, ask yourself if this incident will matter in the next five or 10 years. Most likely it won't, and if that is the case, try and stop worrying about it and focus on something positive instead. Don't let today's emotions stop you from accomplishing tomorrow's goals.

Whether you're obsessing over what someone has said to you, or you're critiquing yourself, try to evaluate those thoughts and if they're valid. According to Psychology Today, try to evaluate the credibility of what you're thinking. Sometimes we make things up in our heads because our brains are capable of thinking such irrational thoughts like assuming what others are saying about us or believing something is true when clearly it's not. Try to listen to your gut when you're having these thoughts. There's no reason why you need to create exaggerated scenarios in your mind when they don't need to exist.

6. Remember: You're A Work In Progress

Let's be honest here: no one is perfect. Everyone you know has a few flaws about them, but each person chooses to deal with them differently. According to Psychology Today, think of mistakes as learning opportunities. View your flaws as a way to help you become a better person. There's no reason why you need to beat yourself up over the little things. Your life is about the journey, so enjoy it as much as you can.

Your internal monologue are supposed to be there to motivate you in the right direction, but sometimes self-doubt can creep in and knock everything you have worked so hard towards instead. Take charge of your thoughts the next time your inner critic comes out to play. No one else is telling you these negative words besides you. Hopefully with these tips, you're able to change your thought pattern around and continue to move forward to become a better person inside and out.