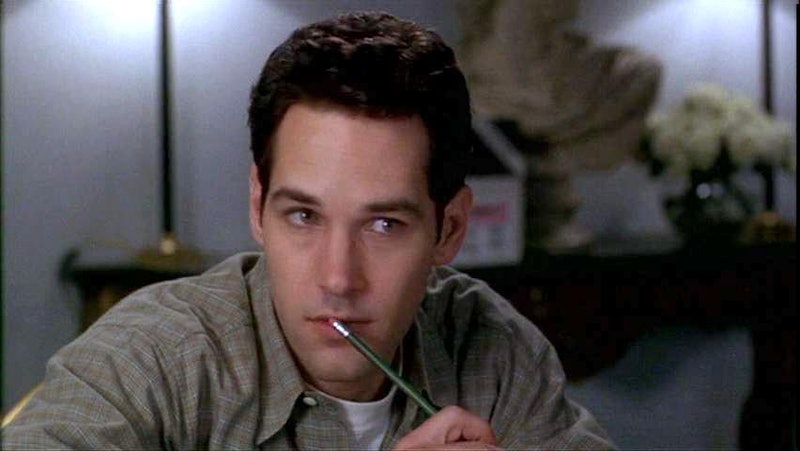 We all have our list of movies that we'll watch literally any time and any place, even if it means canceling plans to curl up in front of when they show up on TV. I wouldn't be surprised if Clueless fits that description for a lot of you. So what if I were to tell you that I could change the way you look at Clueless forever and ever with just one simple comment? Are you ready for that level of mind-blowing? At least, it was for me, and I know I'm not alone in this. The Clueless fandom is too vast right now.

OK, so. You know how Paul Rudd's character Josh is supposed to be kind of schlub in the movie? Like, sure, he's more mature than Cher by far (not that the bar was particularly high there) and vaguely knows what he wants to do with his life, but he's kind of... sloppy. Especially when compared with the rest of the fashion in the movie, it's clear from his constant barrage of flannel and button downs that we're not supposed to be attracted to Josh right off the bat. He's supposed to gradually win us over with his wit and charm, until by the end, we don't care that he dresses like he's on a college improv team. We've fallen in love with our nerdy RA, and we don't even care anymore.

Except, did you know that Paul Rudd wore a lot of his own clothes in Clueless ? So, we weren't falling in love with Josh, we were actually falling in love with Paul Rudd. And, more than that, for a second there we were all totally in Paul Rudd's league. It may have been a small window, and it may have closed when Clueless became as immensely popular as it did and Rudd's career blew up, but this is proof that it existed. Let's be honest: you could completely have gotten with this goateed specimen who wore black pants, flannel, some sort of black jacket, and shoes by the pool.

See what I mean? The only thing that could make this more real for me is if Paul Rudd also provided his own book for Josh to read in the movie. Then I'll know for sure that, if given the opportunity, we all would have turned the real live human person Paul Rudd down for a date if we met him in this time frame. Come on — doesn't this guy totally remind you of one of your ill-fated college boyfriends, who looked like he'd stumbled into the fountain of eternal flannel youth, and would never stop producing heretofore-unseen variations from the bottom of his closet?

We have all totally dated this guy, remember? He asks you out to dinner and a movie, but accidentally left his wallet at home, so he lets you cover it and says he'll pay you back, but he never does?

We thought that guy was Josh, but it turns out it was Paul Rudd all along, and we all missed our opportunity to make like Cher and see beyond the plaid and the flannel to the mature, witty, sophisticated Paul Rudd-esque man within. Sigh. Watching Clueless is gonna feel a whole lot like taunting myself with what might have been from now on.