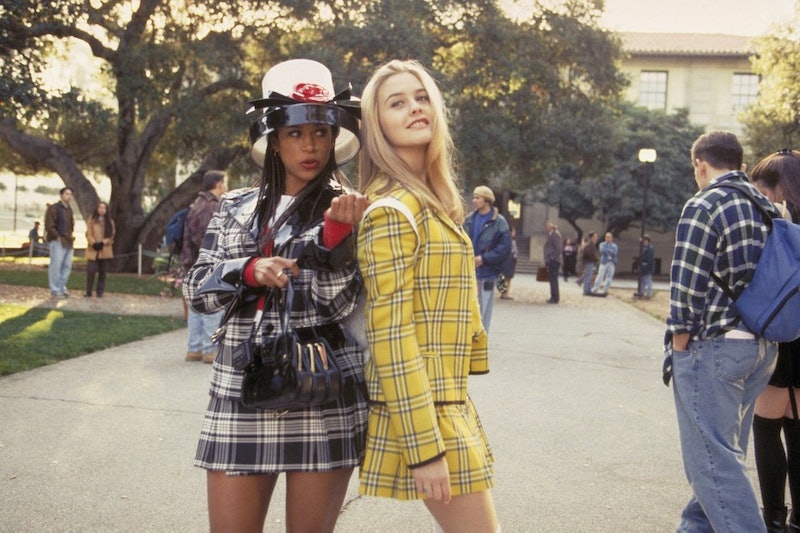 The year was 1995. Kurt Cobain had just committed suicide the year before and gangsta rap was all but dead. Full House ended depriving all of us of our weekly dose of John Stamos. And Superman (aka Christopher Reeve) became wheelchair-bound. In short, things seemed kind of dismal. And then came Clueless, a feminist movie based off Jane Austen's Emma.

This year marks the 20th anniversary of Clueless. And our world hasn’t been the same since. And no it’s not just because we have better phones. From fashion (hello knee socks) to music (hip hop, rock, and pop on the same album? Mind explosion!) to linguistics (whatever!) Clueless has influenced us for the past 20 years. But more important than all that cultural jazz, Clueless is a feminist masterpiece.

Sure at first glance the teen “chick” flick seems like little more than another fluffy comedy that would easily be forgotten in the annals of cinematic history like one of those Elvis movies. However as the Transformers like to say there's "more than meets the eye." Unlike many teen movies which revolve around male horniness, (Fast Times at Ridgemont High, Dazed and Confused, American Pie) is about the ladiezzz!! Female friendship and empowerment is central to Clueless.

Let's start with the sexy stuff: sex. When it comes to sexuality, the girls respect each other's decisions. While Tai has boned more than a few guys, Dionne is only "technically" (and we all know what that means – wink, wink), and Cher is waiting for the right guy before she pops her cherry. Though Tai and Dionne have a few more notches on their bedposts, Cher does not feel the pressure to lose her virginity (technically or otherwise) and the girls do not feel the need to push her. No slut-shaming or virgin-bashing for these forward-thinking ladies! As Cher says, "I'm not a prude. I'm just highly selective."

She makes her point extra clear when she shoves off some loser trying to grope her at school, shouting "Ew, get off me! As if!" and pushing him off with disgust. When her friend Elton tries to get all touchy-feely in his car, she lets him know that “no means no”. Even if that means getting out of his car and being stranded in the a valley. Cher is not about to put up with any fuckboys and could care less about being perceived as bitchy or prudish. Her body. Her choice. Period.

Though there is no personal benefit, Cher goes out of her way to make Tai feel welcome even though she could be risking her own popular status. And it's all out of the goodness of her heart. Because (let's break some stereotypes shall we?) not every popular pretty girl is a total biyatch. Cher is a sweet little cupcake. She protectively takes Tai under her wing and introducing her to the world of makeovers, workouts, and beauty regimens and away from the world of drugs.

When Tai and Cher get into a skirmish over Tai's romantic feelings Josh, Cher goes down into a "shame spiral", feeling horrible for being so unsupportive of her friend. In a heated moment, Tai calls Cher "a virgin who can't drive". Her use of such a misogynistic insult to dispute Cher's opinion (which has nothing to do with her virginity) causes Tai to be agony as she later ruminates over their friendship. A week later they quickly and tearfully make up showing us that “ovaries” do come before “brovaries” and that resorting to cheap insults is never the right answer. Especially when you use them to make a woman feel like her thoughts and feelings are as valid as the ramblings of a derelict vagabond. Or Rush Limbaugh. Considering that close (and not catty) female friendships are still largely underrepresented in the media, their love for each other (and Dionne) makes a statement.

Best of all Cher is inclusive. As we all know, Cher's bestie Dionne is black. Dionne not a token, a sidekick or a stereotype. Dionne has a mind and a personality of her own, often calling Cher on her BS, (not stopping at a stop sign or subtly telling her that she's selfish sometimes). And upon finding out that her crush Christian is gay, Cher lovingly accepts him as a new shopping buddy rather than feeling slighted.

So now you're thinking, yeah OK all good points! Cher is a third-wave feminist. But what about her obsession with fashion and beauty? And to that, I say so what? Clueless is a unabashed celebration of being a girly girl. The ladies love fashion, makeup, and shopping yet their interests aren't portrayed as silly or symbolic of their fragile female natures, (underscored cheekily by No Doubt's "Just a Girl" played in the beginning). Nor are their classic interpretations of femininity portrayed as shallow or bitchy, as they are in Mean Girls or Cruel Intentions (no shade because I love both of those movies). On the contrary all three of the women are portrayed as strong, sassy, and opinionated, yet loving and generous as well. Because strangely enough you can like high heels and lipstick and still like boys and being a bad ass bitch too.

More like this
22 Movies On Netflix That Are Perfect For The Whole Family
By Bustle Editors
Beyoncé & Madonna’s “Break My Soul” Remix Honors A Group Of Black Icons
By Stephanie Topacio Long
At 28, Lesley Manville Was Acting, Picketing, & Singing Kate Bush Songs
By Olivia-Anne Cleary
Reese Witherspoon Gave Fans Hope For 'Legally Blonde 3' After This Surprising Movie Inspired Her
By Jake Viswanath
Get Even More From Bustle — Sign Up For The Newsletter