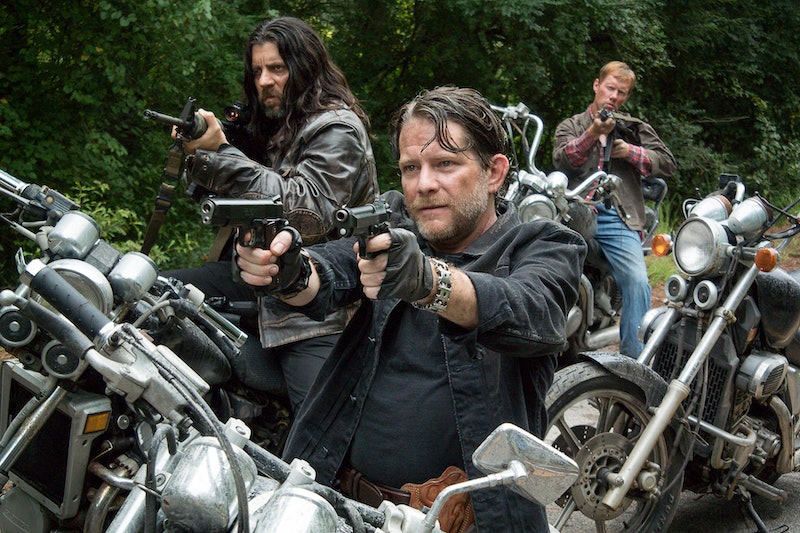 While Sunday's episode of The Walking Dead looks to be rousing romp with Rick and Daryl, the midseason finale officially introduced the next Big Bad. Now that Negan's name has been spoken on the show, let's get into his biker gang... or whoever's left of it after Daryl torpedoed a small group of them. Who are the Saviors on The Walking Dead ? If Negan's followers in the AMC series are called Saviors and resemble that group in the comic, we're going to learn a lot more about this interesting and brutal rew soon enough. Spoilers for The Walking Dead graphic novels ahead.

First of all, in the comics the Saviors initially occupy Hilltop Colony — doesn't that just sound pleasant and cheery? It's a great bit of juxtaposition in the graphic novels. They can be a bit cult-like. They worship Negan and are sometimes known to chant. He even has multiple wives. They actually formed from within Hilltop and then later took over. They murder and torment for resources, as we've already witnessed on The Walking Dead with Daryl, Sasha, and Abraham. However, they do ensure "protection" from zombies as payment, so it's a bit of a mixed bag with them. Hilltop Colony is both terrorized and reliant on the Saviors.

You can see how this is a conflict with Rick Grimes and his gang at Alexandria. They don't need protection. They're good. When Rick first encounters the Saviors in the comics, he turns down their demands, which isn't something they are used to hearing. They attempted to take back Hilltop for good, but it didn't exactly work out in their favor (this is the part of the comics where Glenn's head is bashed in with a baseball bat). They soon claim to have taken over the Alexandria Safe-Zone, and Rick vows to kill Negan himself. Abraham also dies as a result of this initial disagreement with the Saviors, and once Negan shows up he threatens to rape Carl — which has already happened on the TV show. A different villainous group, the ones who "claimed" things lead by a man named Joe, made that same threat in Season 4.

The Saviors also have a secret base at an abandoned mill. They "decorated" the entrance with Walker heads on pikes, like Game of Thrones. As awful as Negan and the Saviors are, I'm actually really looking forward to seeing that on the AMC series. I'm also still curious as to whether or not the Wolves are associated with the Saviors in any way — and those lone travelers who stole Daryl's bike. Negan did brand someone, like the Wolves. The important thing is that with the arrival of the Saviors, this becomes an all-out war on The Walking Dead — and it doesn't hurt that the opposing army is fascinating.