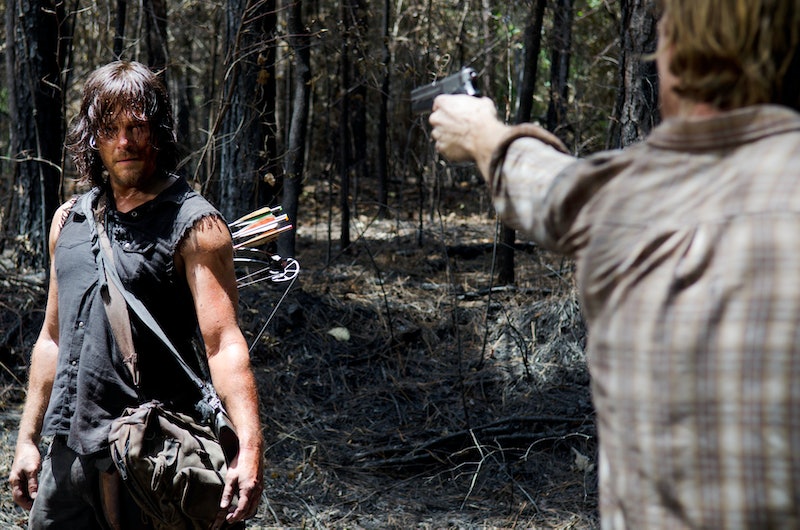 The midseason finale of The Walking Dead may have set up more cliffhangers than major dramatic moments, with several characters now in the balance, but it's what comes next that has me truly shaking in my boots. In a promo clip that aired during Into the Badlands, The Walking Dead introduced Negan, a comic book villain in more recent issues of the comic books that is so horrifying, just name-dropping him is enough to strike fear and anticipation into the hearts of fans. This is a guy who brutally killed Glenn Rhee, a fan favorite in the comics and on the AMC series, practically as a soon as he debuted on the page. We know that Jeffrey Dean Morgan will play the new Big Bad, but this makes it real.

In the two minute look ahead to the second half of the season, which will premiere in February 2016, (the clip confirmed the month but not the specific date yet) we caught up with Daryl, Sasha, and Abraham as they made their way back towards Alexandria. They were stopped by what appeared to be a biker gang. No, these folks did not appear to include Daryl's "friend" from a previous episode who stole his bike and crossbow, however, it's likely that the Saviors got the tip from him and his girlfriend.

The menacing group demanded that our three heroes get out of their truck. The man who spoke for the bikers was very casual about how he and his cronies would kill them if they refused to comply. He then demanded that Daryl and the others hand the truck (and its itemized parts) as well as their weapons over, because they didn't belong to them. "What," said Abraham. I agree; the biker gang needed to expound. Were they about to unload some new philosophy about possession and ownership in the apocalypse? They didn't seem like the type of people who share everything and live communally. Alas, that was not the case. "Your property," the speaker of the bikers said, "now belongs to Negan."

Well, boom goes that dynamite. Now that his name has been spoken out loud on the show, this is all finally happening. You can watch the full clip below for further analysis, or if you happened to turn your TV off before it aired. Are you excited or scared for Negan's eminent arrival on The Walking Dead?