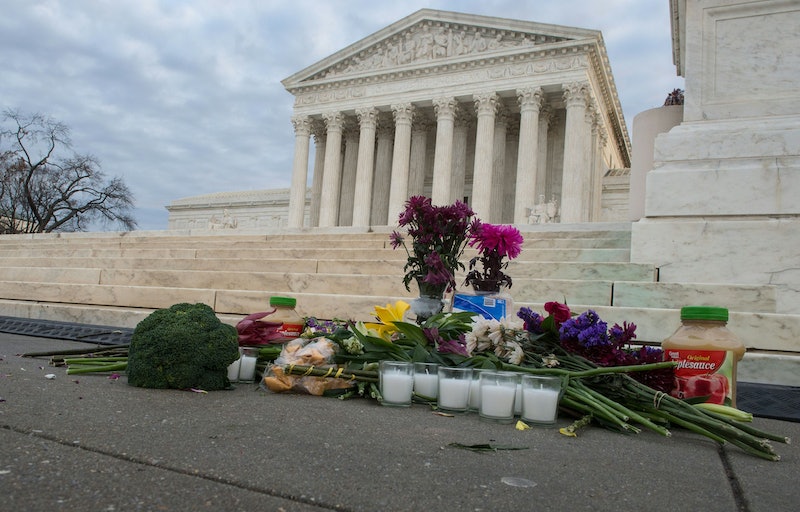 Supreme Court Justice Antonin Scalia passed away last weekend at the age of 79. As the country continues to mourn the loss of the iconic judge, thousands have come to the nation's capital to pay their respects. The casket of the Associate Justice was presented at the highest court in the land on Friday and a memorial service is set to be held the following day. In the meantime, Antonin Scalia supporters are leaving applesauce at the Supreme Court in a colorful tribute to the justice, who was known for his witty, verbose dissents, oral arguments, and lectures.

The "pure applesauce" reference harkens back to Scalia's Obamacare dissent, in which the justice used the exclamation to convey his surprise at such a ruling. Even fellow Associate Justice Ruth Bader Ginsberg made mention of applesauce and many other iconic Scalia-isms in her tribute to her colleague following his passing. Applesauce wasn't the only food item that has been left among the flowers and copies of the constitution to honor Scalia's memory. Bouquets of broccoli evoke Scalia's oral argument against Obamacare from 2012. Scalia used the vegetable as a symbol for his fears of how far-reaching the Affordable Care Act could become. He questioned Obama administration lawyer Donald Verrilli with this memorable quip:

Fortune cookies have also been left near the makeshift Scalia memorial. The prophetic desserts were mentioned in Scalia's dissent against the court's ruling in favor of same-sex marriage. The justice considered the judgment rendered to be mystifying in a rather troubling manner, reducing the Supreme Court's decision to something akin "to the mystical aphorisms of the fortune cookie" in the first biting paragraph of his dissent. The language of the dissent would only grow more colorful, as hippies, logic in poetry, and threats to the very democracy he held so dear were evoked throughout Scalia's lengthy rebuttal.

Scalia's legacy is one of a rather prolific justice whose turn of phrase and compelling arguments will live on regardless of who is nominated to succeed him. The funeral planned for Scalia on Saturday is expected to draw many prominent politicians and legal professionals as well as Scalia's family. The service itself could very well see similar iconic statements evoked as the clever outpouring of support continues to honor Scalia in a very colorful way.