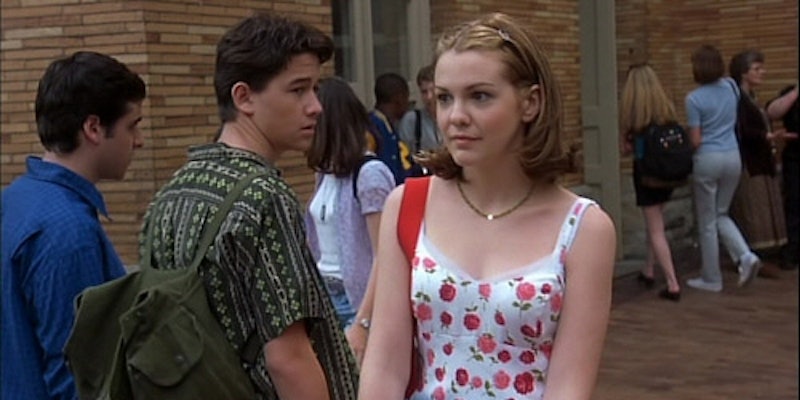 We give the '90s quite a bit of flack sometimes. It was, after all, a pretty cringeworthy era, and the last decade to be fairly lean on new technology (that is, if you don't count upgrading your Walkman to a Discman). But the '90s weren't all bad. There were some really great things that we took for granted back then. Like a youthful Leonardo DiCaprio. Britney Spears, generally. And dating. Dating was super cute in the '90s -- much more so than it is now, in the age of Tinder where romance is a swipe right. In the '90s people were quite earnest, and that extended to dating. Which made for some super cute relationship beginnings.

In fact, dating in the '90s was so cute that there are some things we should consider revisiting if we know what's good for us. I get that some of you reading this won't even remember the '90s or a time before online dating, but bear with me. Once you read about some of the adorable shit that used to go on, you're going to agree that there are certain trends we should revive. The '90s, as it turns out, wasn't all just dial-up Internet at Kurt Cobain seances like we sometimes lead you to believe it was. Here are some '90s dating trends we need to bring back immediately.

Now, if someone slipped you a note with your morning coffee or in line at the supermarket, you'd probably think it was super creepy. But in the '90s, notes were all the rage for romance. Writing your feelings on a piece of paper and passing it to your crush was the most nerve-wracking thing you could do, but it could also be the most rewarding when a note was passed to you. It's basically primitive texting, but there's something very romantic about holding a piece of paper with feelings written on it that you just don't get from looking at your phone.

2. Using A Cootie Catcher To Decide What To Do

How do you decide what to do about your crush these days? Text your friends? Google it? Back in the '90s, we would make cootie catchers and let them make all the tough decisions. We didn't always hear what we wanted to, but hey, the suspense of counting as we pinched the paper together waiting to lift a panel and reveal an answer was pretty fun. Also leaving all your big life decisions up to what's essentially a homemade eight ball really takes the stress out of decision-making.

3. Talking On The Phone

Remember when you'd have two, even three-hour-long phone conversations with the person you were dating? And the giddy feeling you'd have when you hung up? Talking on the phone was how you got to know someone between dates in the '90s, and it was much more personal than texting and social media.

4. Friends Coming Over To Help You Get Ready

In the '90s, when you had a big date, your friends would come by (or you'd go to a friend's house) to help try on outfits, maybe have drinks, and generally gossip and preen. This pre-date ritual was much more fun than "meeting someone after work" or texting your friends outfit options. There was much more face time and friend involvement in the pre-date in the '90s, and we should bring that ritual back. It certainly makes the whole thing more exciting and more of an occasion, and it means you get to hang out with your friends more, so everyone wins.

When you're in the throes of romance, there's nothing sweeter than a mixtape. Someone taking the time to choose a selection of songs which both remind them of your relationship and which they think you would like is melt-you-into-a-puddle adorable. I know we don't have tapes any more, but we should definitely bring back making lovely little playlists as a dating ritual. If you're a normal human, do it on Spotify. If you're as cute as a little bunny, burn it on a CD and draw a cover for it. If you're a tiny baby cuddling a tiny puppy sitting in a basket full of tiny kittens, pull out your own tape deck and get cracking.

6. Dedicating A Song On The Radio

Music was a big and very personal part of dating in the '90s. Especially when you'd spend half an evening trying to call up your local radio station to dedicate a song to your crush. And there was nothing like the sweet melancholy of listening to the radio and hoping someone would dedicate a song to you. BRING BACK ROMANCE RADIO!

7. Asking Questions To Learn About Your Date

In the '90s, if you wanted to learn about your date, you had to ask THEM questions. You didn't get to Google them and uncover a vast array of information from various social networks. You went into a date knowing what you knew about a person, and nothing more. What you then discovered came from the horse's mouth. There's something nice about that -- about having to make the effort to get to know someone, and not making value judgments based on what you see online.

For Bustle conversations on everything from '90s nostalgia to being a woman online, check out our podcast, The Chat Room. You can find more on our SoundCloud page.