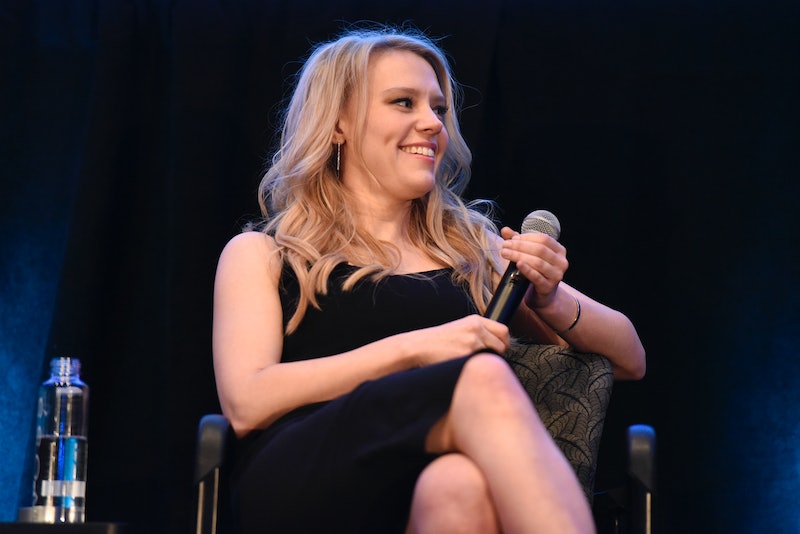 Someone get me a time travel device, because I cannot wait any longer until July 5, when Paul Feig's Ghostbusters premieres. And if I'm already traveling through time and space, I might as well throw in Halloween 2016, because little girls everywhere will be dressing up as the movie's stars and looking fierce, at least according to these new Ghostbusters costume details from Kate McKinnon. From everything fans know already — the amazing cast of McKinnon, Melissa McCarthy, Kristen Wiig and Leslie Jones; Feig's comments on not casting any men; those sneak peak stills of the costumes and McKinnon's new details — it's clear this movie is going to be a feminist dream.

But let's focus on those costumes. These outfits, awesomely, aren't "sexy," just the sort of jumpsuits that someone who ain't afraid of no ghosts would wear. In other words, they're totally functional and not rocking serious cleavage. According to Refinery29, while McKinnon presented the Athena Film Festival's inaugural "Leading Man" award to Feig over the weekend, she talked about the costumes for the upcoming movie with an enthusiasm the movie's fans can definitely share. Said McKinnon,

"It’s sounds like a small thing that I got to wear pants and have my hair up, but it’s actually a really big thing because we were playing scientists — women playing scientists wearing jumpsuits, kind of ugly jumpsuits — and they made dolls of this... No cleavage."

How cool is that? Finally, female costumes that make sense with the characters' lives and jobs, aren't just about attractiveness. McKinnon also spoke about the influence that the costumes are already having on fans, saying,

"While we were filming, Paul would sometimes release pictures of how things were going and the costumes we were wearing, and then we’d get a wonderful email from him whenever someone would tweet back a picture of their daughter rocking a Ghostbusters jumpsuit and a proton pack, which happened a lot. It’s sweet, but it’s also actually quite new and quite huge that something like that would happen."

It's so exciting that audiences will get to see girls and women running around this Halloween in these empowering costumes. It's so exciting to know that some of the biggest pop culture role models of the year will be the badass, feminist Ghostbusters, and that so many female fans will get to dress up like them. As McKinnon joked, "I can tell you with scientific certainty that those Halloween costumes will be the only girls' Halloween costumes available this October that include pants."

It's literally impossible for me to be more excited for this movie.

More like this
Sandra Bullock, Girlboss Extraordinaire
By Matt Harkins & Viviana Olen
Jennifer Lopez Found The Perfect Ben Affleck Throwback Video For Mother’s Day
By Stephanie Topacio Long
Ryan Reynolds’ Mom Hilariously Tests His Patience In A Mother’s Day Video
By Brad Witter
The 'Hocus Pocus' Sequel Finally Has A Release Date & It Makes Total Sense
By Shannon Barbour and Radhika Menon
Get Even More From Bustle — Sign Up For The Newsletter