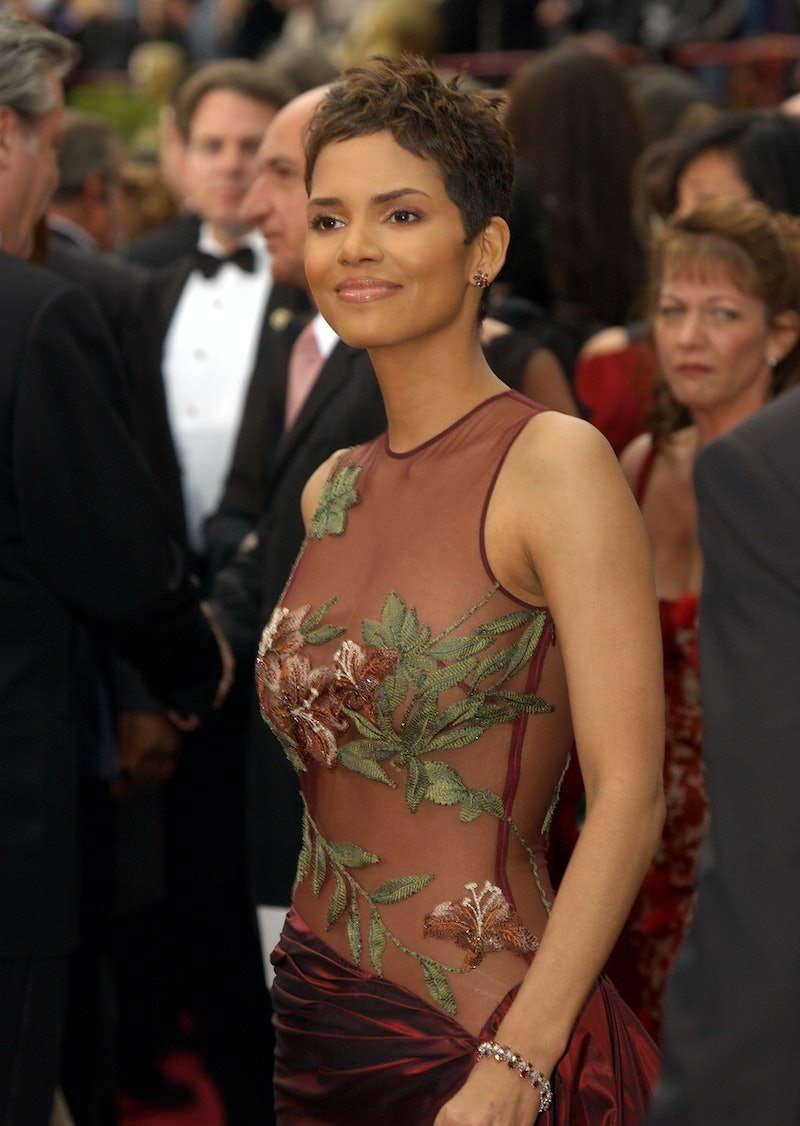 Oscars season usually brings a lot to the table. It gives us movie suggestions for the next couple of months, an excuse to throw a party, and lets us turn into film critics from our own couches. But my favorite bit is watching the best Oscars dresses on the red carpet. It's always a parade of tulle and satin, designer labels, and cold diamonds. And each ensemble reflects not only the actor's personality or tastes, but the era that they wore the look in.

When you look back at the dresses from the '80s, you'll likely see that they were all about big shoulders, plunging necklines, and silky materials. In the '90s, we encountered all the slinky shifts, spaghetti straps, and minimalist styles. And in the 2000s? Well, we saw a variety of sartorial experimentation, ranging from jewel colors to rusty metallics; poofy show-stopping dresses to column-esque gowns; ruched skirts to sleek silhouettes. While it may sound like we were all over the place between 2000 and 2010, I think our fashionable indecision complemented the turn of the century perfectly. We were figuring out our defining style, so a lot of trends had to be sampled.

So what was the Oscars dress that defined the early 2000s the most? I'd argue that it was Halle Berry's 2002 see-through gown.

Berry made history when wearing that gown by becoming the first WOC to win the Best Actress Oscar for her role in Monster's Ball. That amazing moment helped seal this dress as an iconic piece of Academy Awards history. Created by Elie Saab, it was equal parts risqué and modest.

The heavy satin skirt was a cult favorite in the decade, popping up on other red carpet-strutting actors like Hilary Swank, Penelope Cruz, and Keira Knightley. The more volume, the bigger the statement, and Berry's long, rustling train definitely added some wow factor to the look.

On top of that, we had the hues of the dress: Burgundy red that transformed into a dark brown in the light, and faded into a reddish-bronze in the mesh portion. Those dark, rich hues were very 2000s, when stars reached for shades of rust or jewel tones. Just think of Charlize Theron's orange-esque gown at the 2000 Academy Awards or Cate Blanchett's wine-colored dress at the 2004 Golden Globes.

Next, let's look at the cut of the gown. Considering low-rise bottoms were super popular back then (thank you Britney Spears and Christina Aguilera), the waist of this dress followed that same trend. These days, the skirt of a dress might rise somewhere around bellybutton levels, but this 2002 gown rested right on the hips and dipped toward the thighs, giving the sheer top more of a punch because there's so much more of it.

The elaborate floral embroidery swooped in and gave a touch of modesty to the dress, but the floral print feels relatively dated, what with its muted colors and hyper-realistic print. While still an absolutely beautiful piece, this gown is completely rooted in the 2000s, in everything from its cut and silhouette to its color palette.

Berry's Oscars dress absolutely defined the 2000s, and I can't wait to see which gowns best represent the teens at the 2016 Academy Awards.