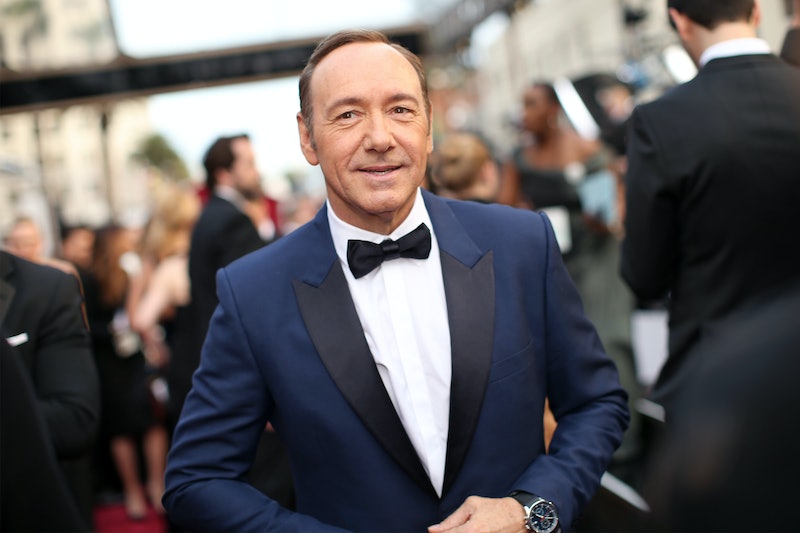 During her opening monologue at the Oscars, Ellen DeGeneres referred to the last time she hosted the show, way back in 2007. "Things are so different now," she deadpanned. "Last time... Cate Blanchett was nominated, Meryl Streep was nominated, Leonardo DiCaprio was nominated, Martin Scorsese was nominated. So different!" Yet while there was definitely some 2007 deja-vu at Sunday's show, this year's Academy Awards was also reminiscent of another ceremony, 2000's, in more ways than one; in addition to this Oscar show's ratings being the best in fourteen years, the ceremony itself shared many similarities with the one held in 2000. A comparison:

In 2000: The Spacey-starring American Beauty was up for eight awards and won five, including Best Picture. Spacey was everywhere, winning Best Actor for his role as Lester Burnham and presenting the award for Best Adapted Screenplay. In his acceptance speech, the actor paid tribute to his mentor and friend Jack Lemmon, who would pass away just one year later.

In 2014: This year, Spacey was again the king of the show, but the reason why is a bit more ambiguous than in 2000. Sure, he was there to introduce the Governor's Award winners (in which he mentioned the late Lemmon), but that doesn't explain his appearance in the super selfie, his participation in the pizza party, or his end-of-show hangout sesh with the cast of 12 Years a Slave. Not that we're complaining, of course; Spacey's Oscar takeover made the already-great show even more enjoyable.

In 2000: Jonze received a Best Director nomination for Being John Malkovich, which also received nods for Best Supporting Actress and Best Original Screenplay. Payne, along with Jim Taylor, was nominated for Best Adapted Screenplay for Election.

In 2014: Once again, Jonze and Payne received Oscar nominations, but this time, the categories were reversed. Payne got the Best Director nod for Nebraska, while Jonze won Best Original Screenplay for Her. In total, the two filmmakers' movies picked up eleven nominations, including three just for Jonze (Screenplay, Picture, and Original song).

In 2000: Jolie won Best Supporting Actress for her role as a mental patient in Girl, Interrupted, but it was what came after that's forever seared in audiences' memories. "I'm so in love with my brother right now," the actress said as she accepted her award, and when photos of the siblings passionately kissing on the red carpet went public, we all began to take that sentiment a bit more seriously.

In 2014: Jolie's presence at this year's Academy Awards had much less fanfare, but when you're one-half of Hollywood's most famous couple, nothing you do can really be considered "low-key." Alongside partner Brad Pitt, Jolie presented an award, was honored for her humanitarian work, and even snagged a spot in DeGeneres' star-studded selfie. She may not have been nominated for an award this time, but Jolie still managed to win our attention.

In 2000: Meryl Streep picked up her 12th acting nomination for Music of the Heart, composers John Williams and Thomas Newman received nods for Best Original Score, and Emmanuel Lubezki lost out on Best Cinematography. All four individuals had previously received many nominations each.

In 2014: History repeated itself when Streep, Williams, Newman and Lubezki all received nominations, with Lubezki winning the Oscar for her category. Except some variation of this to occur at the next few dozen awards ceremonies.

5. The Musical Guests Were Surprising

In 2000: It was no shock when Sarah McLachlan and Randy Newman dueted on Toy Story 2's "When She Loved Me," or when Phil Collins performed Tarzan's "You'll Be in My Heart." But when Robin Williams sang "Blame Canada" from South Park and 'N Sync joined Gloria Estefan for "Music of My Heart?" To put it lightly, the 2000 Oscar performers were an eclectic line-up.

In 2014: What do a Broadway star, a Beaches legend, a media mogul and the lead singer of the Yeah Yeah Yeahs have in common? Along with Pink, U2, and Ezra Koenig, they all performed at the 2014 Academy Awards. While all the performances were enjoyable, it was the oddity of the line-up that made the biggest impression on viewers.

6. There Were Tributes to The Wizard of Oz

In 2000: In a tribute to classic past Best Original Song nominees, musicians like Faith Hill and Dionne Warwick teamed up to perform some of film's most memorable tunes, from "The Way We Were" to "Everybody's Talkin.'" One such song? "Over the Rainbow," from the Wizard of Oz.

In 2014: In honor of Oz's 75th anniversary, producers lined up Liza Minnelli, Whoopi Goldberg, and Pink to pay tribute to the legendary film. The latter singer performed a gorgeous version of "Over the Rainbow," all while footage of Oz played on the screen behind her.