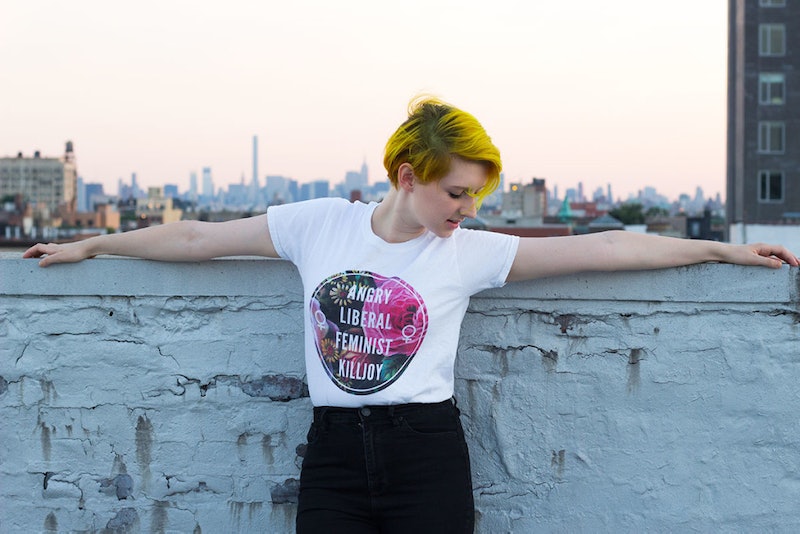 Ever been called an "angry feminist"? I have. It's one of the most-used terms when it comes to feminism; "angry feminism" has been discussed in The Guardian, TIME, MIC and the Huffington Post, all exploring why anger and feminism seem to go together in the public consciousness like Thanksgiving and pumpkin pie. Feminism seems to bring up images of Emmeline Pankhurst's arrest, the myth of 1968 bra-burning (which, by the way, never happened), and that word: anger. Anger everywhere. But to be called an "angry feminist" is demeaning, sexist, and highly offensive, in my seriously furious opinion.

Female anger, frankly, frightens and upsets people. A study from 2015 in Law And Human Behavior found that people were far more likely to reject an angry female speaker's reasons than they were to reject an angry male's. And, upsettingly, a 2008 study found that both men and women gave less professional status to women who expressed anger, while men who showed anger were promoted. Why? Because anger in women has been depicted as unnatural for thousands of years, and means you're abnormal, emotional, and not "feminine". There's a big and uncomfortable context behind the act of calling somebody an "angry feminist," and it carries a lot of sexist insults for such a small word.

Here's a little journey into why being called an "angry feminist" is so severely, historically problematic.

There's a crucial imbalance in the essence of calling any woman "angry". (The "angry black woman" stereotype experiences this in spades, though in its own particular, racist way.) Women are "angry" for doing the precise same things in the exact same ways that get men the adjectives "passionate" or "committed" or "sincere" or "fervent". An "angry" woman is not in control of her thoughts, defending a position with clear and well-cut arguments; she's just having a tantrum. Because, you know, uteruses.

This goes back to ancient theories about female irrationality. The woman is not supposed to be a rational thinker; she is emotional and soggy rather than capable of refined opinions or serious and complex thought. While men can put forward opinions and be read as impassioned freedom-fighters with rhetoric to spare, women get angry in public and suddenly they're out-of-control wildfires whose ideas are clearly too fraught with emotion to be taken seriously.

"Angry" is a complex put-down for a woman. It implies excess emotion that can't be controlled through will. It's also a paradox: I'm simultaneously leaking emotion everywhere like a typical lady, and expressing the most unfeminine one I possibly could. "Angry" is a male response, a burly hero's reaction to the local dragon. To be called "angry" is to be seen as deeply unladylike, unrefined, unwomanly, and always has been — mouthy, p*ssed-off women have been labelled as scolds, harridans, and hen-peckers for centuries. Anger is not a lady-feeling, because it isn't genteel or polite or moderated by male opinions on delicacy.

2. Calling Me "Angry" Implies I'm Frightening Rather Than Effective

"Angry feminist" is both an insult and a diminishment. It means, ultimately, a refusal to take seriously. Anger is not the thing that wins debates and causes real change; it's just fuel for bigger machinery, for protests and petitions and peaceful civil disobedience and serious structural revision. Calling a feminist "angry" implies pure emotional terror instead of effectiveness, like that guy who stands on the corner shouting at pigeons.

Let there be no mistake: inequality causes many reactions in me. Fury is one of them, as it should be, but it is not blind fury. It also prompts deep empathy, serious pain, the need to foster support among other women, strategic thinking about how to better the situation, eloquence, frustration, and passionate hope for a better future. Hitting every feminist with the "angry" stick implies that's the only thing in our arsenal, that yelling until we're hoarse is the limit of our powers. Fortunately, that is a severe underestimation.

I discussed this on Twitter with several female friends. What adjective would be best? "'Passionate' is ruined forever by corporate appropriation,'" one said, referring to the need to talk about your 'passion' for stacking shelves or whatever in job interviews. "I prefer 'terrifying.'" That's a move I support. Angry feminists are implied to be shouting into empty space. Terrifying feminists are getting sh*t done.

3. The Word "Angry" Demeans The Scale Of Feminism

Let's look at that contrast between "angry" and "impassioned" again. "Impassioned" implies a kind of abstract loftiness; it's the sort of word you use for activists and other people fighting for causes. Anger? Anger's personal. It's meant for people who've been personally annoyed and are taking it out on their environment. And that seriously denigrates what feminism is.

The personal is political, and women fight for feminism not just for the billions of women worldwide but for their own rights and experiences; this is true. (The "I Need Feminism Because" campaign is testament to how personal feminism can be, as is the Everyday Sexism Project.) But putting us in the "angry" box implies that it's just personal, that we're fighting for our own experience rather than for the entirety of the female world.

Anger is a small-scale word, and feminism most definitely is not a small-scale thing. It's a way of talking down to us: look at you little girls with your little emotional problems, like huge income inequality, the gender wage gap, rape statistics, workplace harassment, menstruation huts, sexual objectification, and denial of basic education to girls. Tiny, personal stuff like that.

Calling me angry about it just reinforces the inequality and silencing of women's voices that we've been fighting for all along.

More like this
23 Abortion Funds In States With Trigger Bans To Donate To
By Emma Carey
Here’s Your Daily Horoscope For May 17, 2022
By Mecca Woods
25 Manifestation Quotes From Lady Gaga, Oprah, & More
By Megan McCarty
How To Add Music To An Instagram Post
By Emma Carey
Get Even More From Bustle — Sign Up For The Newsletter