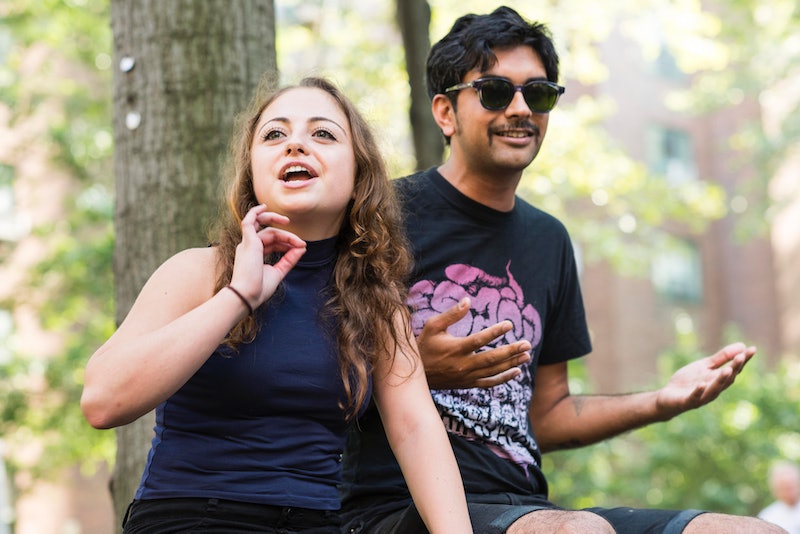 Recently, I ran into an Asshole at a Dinner Party (TM) who had, amongst other things, opinions about feminism and misogyny. Namely, he didn't think that misogyny was a real problem in the Western world because "he'd never seen evidence of it himself." Bear in mind that this dude didn't actually seem to mean to be an asshole. He was just being deliberately ignorant — and white, and straight, and well-educated, and basically in every position to educate himself as much as he chose about any given issue.

I am a strong proponent of getting into debates with these people, and giving them rational, reasoned evidence and arguments as to why their perspective needs to change. Statistics can only do so much; studies have shown that anecdotal evidence is just as, if not more, powerful in influencing peoples' opinions as rational evidence. So if I had a chance to meet that dude again, I'd have thrown in my own experiences, and those of my friends: Discovering they made less than a man who did their same job, being sexually assaulted and then mistreated by the police, being constantly pressured to have babies, being felt up or poked on public transport and harassed by strangers, experiencing surprised customers who couldn't believe they were a "girl" and so good at their job. All those stories are true. And I wish I'd marshalled them in time.

So next time you meet an Asshole at a Dinner Party with opinions on feminism, here's a good way to school them: with a healthy dose of input from your own experiences and those of your friends, of course.

How nice for you, sunshine! It must be lovely to live in a bubble. Let me tell you some things that may transform your idea that it's not a real problem in the Western world (which I imagine is what you mean). In 2014, women in full-time employment in America were paid, on average, 79 percent of the income paid to men. That's despite huge rises in women's education. And it seems, according to reporting in November 2015, that it will take over 100 years for women to be paid the same amount for the same work. This reflects sexism in hiring practices, inequality in maternity and paternity leave, glass ceilings, hostile work environments, the cultural expectation that women not fight for pay rises, occupational segregation, and women's work being undervalued, among other things.

Or let's take women being threatened with death for talking about gender inequality in video gaming. Or the fact that one in every six American women will be the subject of a rape or attempted rape in her lifetime. Or that, in 2014, 26,027 people filed official complaints about sexual discrimination in the American workplace, and that women file 82.5 percent of all sexual harassment complaints with the Equal Employment Opportunity Commission. But do tell me more about how misogyny and gender discrimination don't actually exist.

2. "Feminists Should Be Equalists"

I've discussed this in detail for Bustle before, so really, I should just give you a handout of my article and tell you to come back when you've read it. But here's a summary: Feminism is based on altering the historical, endemic discrimination against women across all segments of society, from the economic to the medical to the educational to the sexual. It believes that men and women should be equal and have equal rights, and that fighting against sexist attitudes and restrictions is necessary to make this happen. We believe in equality, but we're also realists about the world, and how far behind women have been and continue to be.

And no, we shouldn't be humanists either. Humanism is an entirely different philosophical position, one focused on rational, scientific thought. Don't mix up your words.

3. "Men Have Rights And Problems Too"

Of course they do! Patriarchy has bad effects on men all around the world. It keeps them from expressing their emotions, traps them in gender roles they may not want, and causes damage all over the place. Feminism isn't about minimizing men's problems, or saying that they have everything the way they want it. It's possible to focus on the difficulties (which are many and long-standing) of one gender without pretending that the other one is hunky-dory all the time. Feminism benefits men.

4. "There Are Just Natural Differences Between Men And Women"

Indeed there are. But difference does not mean incapability, which is the big issue here. Women score consistently higher than men on IQ tests, and in highly educated countries like Sweden and Norway, the gender gap in aptitude in math and science among teenagers is essentially nonexistent, despite the long-held belief that girls suck at math. A lot of the so-called "natural differences" really come down to societal beliefs. Women are discouraged from going into STEM fields, for example, because of gender stereotypes that it's "for boys."

5. "There Are Much Bigger Issues In The World Today Than Women's Rights"

OK, then. Tell me another measure by which we could boost the world economy by $28 trillion every year. That's the approximate cost of gender inequality worldwide. If women were given equal education and opportunity, equal pay, and full participation in the workforce, they'd boost global wealth by a phenomenal amount.

Also, it's entirely possible to be a feminist and also advocate for refugee rights, ending racism, equality for the disabled, nuclear disarmament, and whatever else. But feminism highlights a serious and very important issue, and insofar as ranking causes go (whatever good that will do), I think it lodges itself pretty high.

Yes, all feminists want to lock men in basements and make them do their bidding. That's why the straight and bisexuals among us marry men, date men, have children with men, and regularly spend a lot of our time with men. Feminists are perfectly capable of liking men (Particularly men who love gender equality! Go, those dudes!) and also condemning the world's gender oppression and silly stereotypes. We want to be equal; not to have nobody to talk with at brunch.

7. "Feminists Want Women To Have More Power Than Men"

Incorrect. The playing field is not level, even if your limited experience dictates that it is. (See all the previous examples given about wage inequality, for example.) Feminists genuinely do just want women to be given the same opportunities and rewards as men. It seems relatively simple, but you'd be surprised by how many people fight it, or see it as threatening their vested interests. We're not trying to cheat anybody out of anything, we promise!

This is a tricky issue, and I understand that it can seem far more rewarding to focus on the positive things that women have done (And there are many! Women have changed the world!) than on misogyny, sexism, and oppression. The reality, though, is that the existence of the bad things (discrimination, sexist attitudes, gender-based harassment) doesn't mean that all women are victims, incapable, or mute subjects.

The whole point of feminism is that we're not victims; we're fighting back, giving ourselves a voice, and making sure everybody knows what's happening to us and why it's not OK. And we're always celebrating awesome ladies who do awesome things, too.

Indeed, some women do not. Some women want to stay home, raise children, and get their fulfilment from being spouses and mothers. And that is wonderful. The key element of feminism is the idea of freedom to choose in a supportive environment. Women should be able to choose whether that's their destiny or not, and not be forced into it by prescribed gender roles, bad employment opportunities, no educational access, or other restrictions.

In a perfectly equal world, everybody (male and female) should be able to choose to be a house-partner or to march off to be a CEO. That's the goal. But women's choices right now face a lot of structural control and opposition, and nobody likes facing closed doors. Feminism wants to fix that! And if you don't, you're holding us back. Now pass that hors d'oeuvre and please stop bothering me.

More like this
How To Fight For Reproductive Rights, Based On How Much Time You Have
By Courtney Young
34 Quotes That'll Inspire You On Juneteenth & Beyond
By Syeda Khaula Saad and Siena Gagliano
The Most Common Traits Of A Gemini-Cancer Cusp
By Nina Kahn
How to Delete (or Pause) Your Hinge Account
By Emma Carey
Get Even More From Bustle — Sign Up For The Newsletter