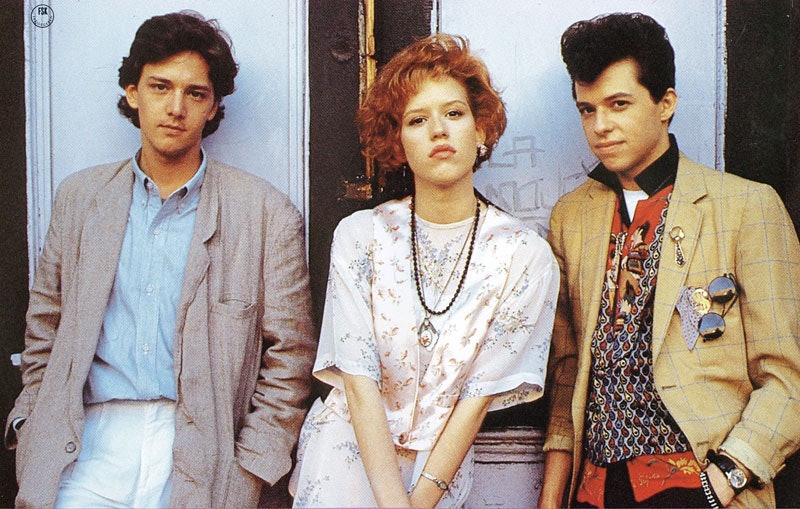 Pretty In Pink is one of the quintessential teen movies, and it’s definitely tied with The Breakfast Club as my favorite John Hughes movie. These films, like most of his movies, explore the teenage experience in a relatable way, no matter what generation you are born into. If they were made today, there would be Twitter, and Snapchat, and Tumblr, but all of those “no one understands me” feelings would be the same. I do have one problem with Pretty In Pink — the ending. Now how could I love Pretty In Pink so much and not love the ending? Well, the rest of the movie is great — it’s just the last few scenes I have a bone to pick with. Did you know that there are actually two endings to Pretty In Pink? The original ending to Pretty In Pink is totally the best.

In honor of its 30th anniversary, let me sum up the movie for you: Andie Walsh is a middle class gal who is in love with Blane McDonough, one of the rich preppies that go to her school. Andie and her best friend Duckie are pretty much tortured by Steff, Blane’s best friend, and their obnoxious preppy crew. Oh, and Duckie is in love with Andie. Eventually, Blane and Andie hit it off but Steff is all, “she’s too poor so you shouldn’t hang out.” In the ending that was seen in theaters, Blane realizes his mistake in listening to his douchebag friend and goes for Andie, and they kiss passionately outside prom. Cute, right? Well in the original ending, the movie ends while Duckie and Andie are at prom together and insinuates that they end up together. Doesn’t that just make more sense?

Sure, Blane is cute and everything — Andrew McCarthy was and still is one of the most beautiful boys of his day — but Andie barely even knows Blane. Not that Andie should have to choose between anyone — she should be able to pick her friend and her boyfriend, but that’s a whole other essay. I think the reason that Blane is so attractive to Andie is that he is, duh, very attractive, but also that he’s kind of exotic, and even dare I say, forbidden. According to Steff and the other uppity jerks at school, they’re Romeo and Juliet. She is a poor person! That could be more motivation for Andie and Blane to pursue each other — the fact that they’re being told they shouldn’t. This advice, of course, is wrong, but I’m just calling out what I see here. How long would Blane and Andie stay together in real life? I mean… two years maximum? And that’s generous. I get this scene is high school romantic, but it's not long term romantic.

Falling for Duckie, as we see in the original ending, on the other hand? Much more plausible, because Duckie and Andie are best friends. They have a foundation and a mutual understand that would definitely lend itself to being in a relationship. After all, aren’t most relationships successful when the two of you are best friends with benefits? Duckie and Andie are past the “honeymoon” part of their relationship, which makes it seem far less exciting than her relationship with Blane, but the steadiness of it makes it a far better option than Blane. Blane’s the guy you go home with for a night or two, but Duckie? He’s the guy you keep forever. Plus, the way he accessorizes? It’s an art form.

It would have been great for John Hughes to release the movie with both endings — that way, you wouldn’t know which one you were going to see. How about a rerelease, Paramount? I bet that would drive people to the theaters.