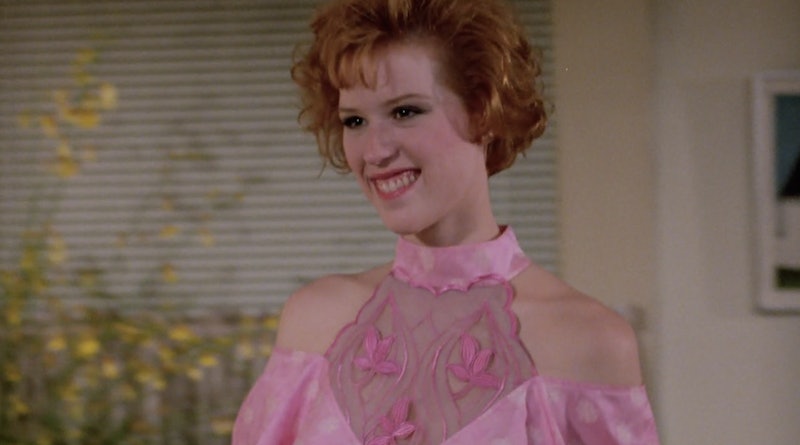 It's almost insane to think about how Pretty In Pink is turning 30 years old this year. I mean, you know I love John Hughes films and the unrealistic expectations they leave me with as much as the next girl, right? I do, but I need to get real with you for a minute. In the hierarchy of the three Molly Ringwald collaborations, Pretty In Pink is definitely the most amusingly weird. Though it’s definitely a ‘80s classic in its own right, you have to face facts: Pretty In Pink has some amazingly strange moments.

OK, those are a lot of bold statements, so let me break down the movie a bit for the uninformed. Andie, who’s a high school outsider, is pursued by Blane, a classic rich kid. Her friend Duckie, who’s secretly in love gets all tweaked about it. Blane’s friend Steff, who also has a thing for Andie presumably, tries to convince Blane that they’re from different worlds. Will these different worlds and tertiary suitors pull the two apart? And on prom night?

Of course not. But the movie is filled with some strange things in between: Blane’s all-of-a-sudden non-break up, Duckie’s casual every day stalking, the fact that Andie puts up with any of these scrubs... well, allow me to just show you.

Chronologically documented for your enjoyment, here are all the most amusingly absurd things from Pretty In Pink.

Actually, I guess these aren't fedoras in a technical sense, but they're concerning nonetheless.

2. This Classroom Is The Cause Of That Hole In The Ozone

I wonder how crunchy everyone's head must feel...

3. "I've Been Out With A Lot Of Girls At This School. What Makes You So Different?"

"I have some taste."

4. Blane Picks This Out At The Record Shop And Andie Still Wants To Go Out With Him

5. "Would You Ever Consider Going Out With Somebody That Had Money?"

No, why would anyone do that, money is the worst, omg.

Literally none of this makes sense to me slash seems possible.

7. Duckie Comes Over To Declare His Intentions To Andie's Dad And Andie's Dog

8. Andie's Dad Basically Tells Him That You Can Love Andie All You Want But She's Probs Not Going To Love You Back, Much Like Her Neglectful, Awful Mother

A blanket statement that sums up his whole role in this entire movie.

10. He Follows Up By Calling Andie Six Times In Half An Hour

11. My High School Boyfriend To The Left, Ladies And Gentlemen

He says about Andie's friends, music, and general lifestyle choices.

What IS THIS SCHOOL?

Probably while waiting outside of clubs for Andie.

15. Are There People On His Cardigan?

And a yellow plaid blazer over his cardigan...?

Not a single person in this film has anything resembling a dignified name.

19. Mmm, I Love It When A Guy Face Gropes Me Like That

20. Pictured: Duckie Proving He Really Should've Gotten A Restraining Order Slapped On Him Years Ago

21. "I'm Old Enough To Be His Mother, But When The Duck Laid That Kiss On Me, I Swear To God, My Thighs Just Went Up In Flames."

22. This Is How I Hang Out With All My Friends

Also did Andie have to sit and wait for Iona to do her hair like that so they could waltz together, because that's crazy pants.

23. Steff Has A Room To Do Drugs And Store Old Chinese Food

24. We All Make Fun Of Andie's Fashion The Whole Movie But Those Are Real Dresses So Like...

Weirdly enough her dog has no response to that.

26. All Of Andie's Love Interests Are Just Creeping During Her Big Fight With Blane

Doesn't anyone go to class in this school?

27. Duckie Throws Down The Prom Sign While He Leaves For Some Reason?

28. This Is Supposed To Be Iona Looking "Normal" But Who Even Knows

I guess pearl bolo ties were an everyday piece in the late '80s.

29. Seriously Though, What Is This Frankenstein's Monster Of A Dress?

SHE HAD TWO PERFECTLY GOOD GOWNS, IT'S CRIMINAL.

30. Duckie In The Middle

Yeah, he probably shouldn't be here for this weird, long winded confrontation.

THAT DOESN'T MAKE ANY SENSE..?!

33. "He's Not Like The Others. If You Don't Go To Him Now, I'm Never Gonna Take You To Another Prom Again!"

But then he gets with the Proto-Buffy the vampire slayer, so I guess it's okay.

34. This Entire Ending, Tho

Well, I hope they enjoy the... four days of school together.

Regardless, Pretty In Pink is still a top tier teen movie, so make sure to pop it in and celebrate as the film turns the big 3-0.