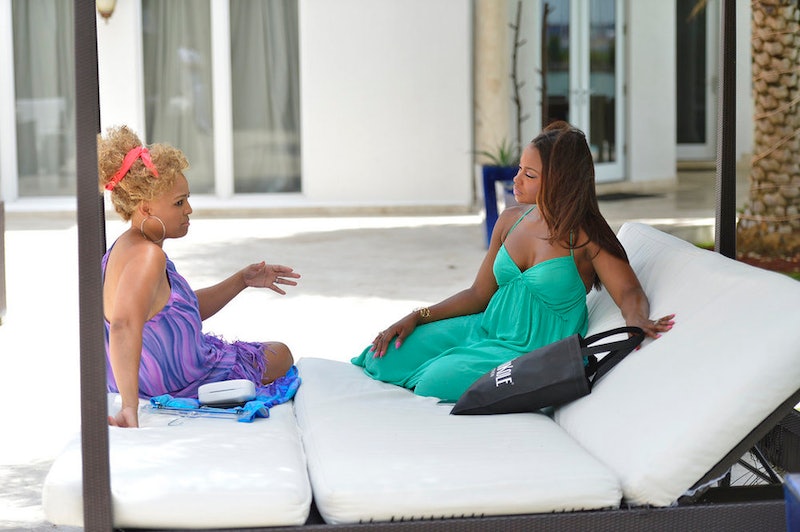 Real Housewives of Atlanta picked up just where the previous week left off, with Kim poised to clap back at the other ladies for gossiping about her and her family. And Kim called out the RHOA for pretty much the whole episode, finally taking her place as a true member of the cast, with all of the shade that that entails. NeNe & Phaedra took Kim to the "School of Reads," attempting to teach her how to fight back against the shade with some more shade. And while Kim is no stranger to a sassy comeback, she doesn't read the same way the others do, preferring a quiet eyeroll to a snap or a twirl.

So in order to help get Kim in shape as a proficient shade expert, NeNe and Phaedra hilariously play-acted a scene between Kenya and Kim to help demonstrate how much Kim needs to stand up for herself. This included Phaedra's hilariously on point imitation of Kenya's voice and her twirls, as well as NeNe demonstrating how a shade expert would respond to Kenya's many accusations — with a perfectly delivered punchline. Of course, they were mostly joking, but they did make some good points — Kim doesn't need to get haughty or snobby when simply referencing her storied history in the entertainment industry stands for itself.

And with that encouragement, Kim did stand up to Kenya to her face, rather than more talking behind one another's backs. And after being called out at the dinner party, Kenya remained frustrated to see how the other women quickly changed their minds about gossiping about Kim after seeing how she was affected. She insisted that they should bear as much of the blame as her, but the demands fell on deaf ears, and she wound up being overshadowed by the rest of the cast, who were all on Kim's side. Kim got even more fired up on Twitter while the show was airing.

Kim received an assist from Cynthia, who asked Kenya to apologize for getting in Kim's face and pulling out her chair when they met for dinner. Finally, while the incident didn't end with a true RHOA brawl, the School of Reads lesson was a surprisingly efficient way to communicate that Kim Fields is not to be messed with anymore — let's see how Kenya reacts once the cast is back in