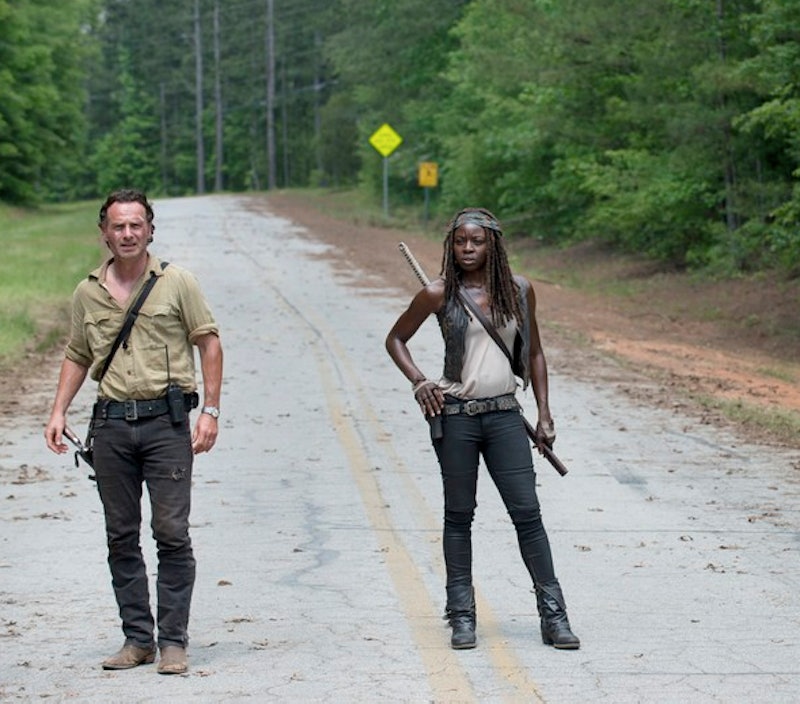 Well, color me speechless. Last week's episode of The Walking Dead was a battle cry, and this week's was a 'shipper's dream? I'm going to try not to think about how all of this is probably some kind of narrative "calm before the storm" and focus on the fact that Rick and Michonne had sex on The Walking Dead and I'm still fangirling out, to be honest.

I mean, I liked Rick's relationship with Jessie, I guess, but this is so much better. As Danai Gurira said on Talking Dead, this was a natural progression for their characters. They have had amazing chemistry since Michonne's introduction on the series, and she's only become a more important part of Rick and Carl's family. Michonne lives with Rick, Carl, and Judith. Carl already looks to Michonne as a mother figure. Still, it took the (momentary) serenity of the Alexandria Safe-Zone to allow these two strong personalities to soften and get comfortable with each other in that way. This isn't like most 'ships on television. There have not been a lot of longing looks or near misses between the two. They've just been a solid team and built this relationship slowly. It's refreshing!

At the end of the episode, the second Rick said he wanted to turn his brain off (not a zombie metaphor, I hope) and he and Michonne turned their cute factor up to 11, I had a hunch that this was going to happen.... but before Sunday it was not something I ever thought we'd see on the AMC series. In fact, the entire episode had a more romantic air than usual. Daryl was on a secret love mission for Denise. Carl spent time with Enid, who he previously had a crush on.

But what happened between Rick and Michonne took all of the focus. Obviously, it's huge news and so gratifying for fans. These characters deserve some happiness, and the official canon launch of the SS Richonne on The Walking Dead just delivered that in spades.

More like this
This 'Gossip Girl' Wardrobe Error Has Gone Viral On TikTok
By Alyssa Lapid
A New 'And Just Like That' Table Read Pic Confirms A Key Character's Return
By Jack Irvin and Grace Wehniainen
Ozzie’s Coming Out Scene With Kitty On 'That ’90s Show' Has Twitter Sobbing
By Brad Witter
'RHOSLC' Star Jen Shah Refuses To Do A Post-Sentencing Interview With Andy Cohen
By Brad Witter and Jake Viswanath
Get Even More From Bustle — Sign Up For The Newsletter
From hair trends to relationship advice, our daily newsletter has everything you need to sound like a person who’s on TikTok, even if you aren’t.