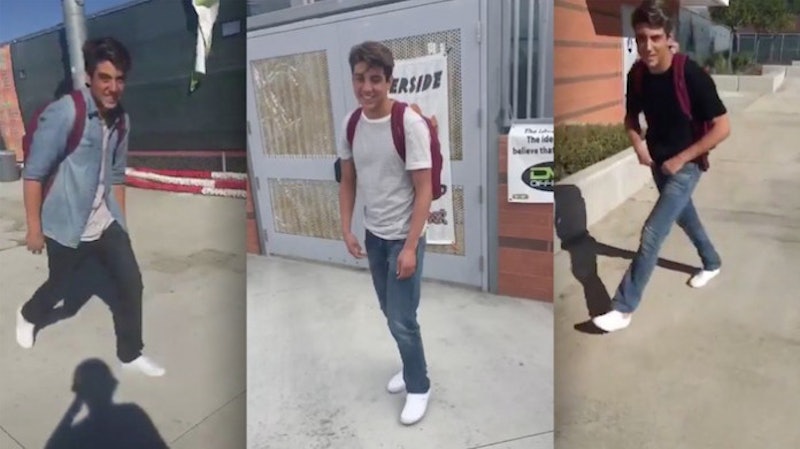 If you have not already, in the next few days you'll be asking yourself: what is the "Damn Daniel" meme? (Among others: Why do I care? Why does everyone else care? Who is Damn Daniel?? And, most importantly — whaaaaat?) I can answer some of those questions for you, but the others are just as good as mysteries of the universe that maybe Neil DeGrasse Tyson can solve for us eventually.

Daniel is a high school-aged boy whose outfits were filmed by his friend Josh, and uploaded onto Twitter. No, they're not fashionistas, it's not an #OOTD — it's just Daniel wiggling into frame while his friend Josh hoots "Damn Daniel" in support of his cool Vans sneakers. Apparently Daniel has a lot of Vans shoes and his friend Josh has a lot of fun complimenting him on camera. The boys uploaded the 30 second video compilation on Twitter, and the Internet said "yaaaaas" and inducted the content into the viral hall of fame. The video has over a quarter of a million retweets and likes, and the numbers keep growing. Check it out here:

As someone reporting on the subject, I'd like to offer some culturally significant and psychologically sound explanation for why this video has become a viral sensation, inspiring quizzes, memes, t-shirts, remixes, and a ton of airtime on Twitter. Unfortunately, I have nothing. But here are some emotional reactions:

The country is so smitten with Daniel that not just the Daniel, but all Daniels get a free donut at Strange Donuts.

What a time to be a Daniel.

People cannot control themselves. They're losing their ability to keep a straight face around the meme!

The meme is spreading like a pandemic. There's no hiding. DAMN YOU DANIEL!

We are truly #blessed to this meme after all.

As for the future of Daniel and his memes, only time (and retweets) can only tell. But in the meantime, know that we have spiraled so far into "Damn Daniel" insanity that you can get yourself a "Damn Daniel" shirt:

In summation, here is this gift for your running playlist — the "Damn Daniel" remix you never knew you needed.