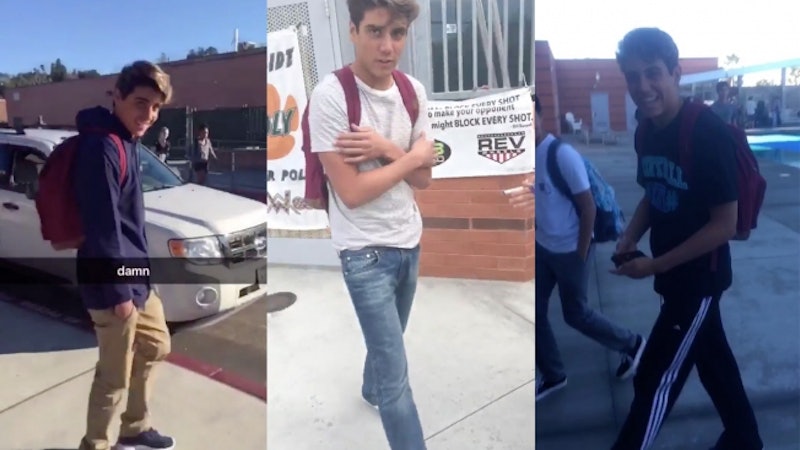 It was just a matter of time before the "Damn Daniel" meme sweeping the Internet would transcend its medium and become the "Damn Daniel" Song. I patiently waited and my prayers were answered. Someone made a remix of the viral Twitter compilation video, and a musical hit was born. In case you are totally lost and have no idea what I'm talking about, let me explain.

On February 15, a video was posted on Twitter of the original "Damn Daniel" video. It had all the elements of a viral video hit: a laid-back California high school student named Daniel Lara, great choice of footwear, and a catchphrase. But let us not forget the most important element — an enthusiastic friend, off camera, supporting his buddy with words of encouragement about his style (hence the "daaaamn, Daniel"). Within 48 hours the video had gathered more than 16,000 likes. It was picked up by many popular Twitter accounts and rallied even more exposure by the end of the week. A viral star was born right before our very eyes and had us all saying, dayyyyyyyyum Daniel.

So far Daniel has inspired countless parodies online, a t-shirt design, a starter pack to become your very own "Damn Daniel," and even a dramatic hospitalization hoax. Here's the original video, ICYMI:

But if there is anything I have to thank Daniel for, it's the amazing remix song. I gave it a listen and I truly think it can be applicable to many different situations. Just give it a whirl:

Just imagine how cool you would look walking in slow motion to this song.

Or how about when you're trying your best to be The Queen with your clique?

Even eating a burrito is cooler with this track.

Of Course, Nothing Will Ever Beat This Kid's Version

#bless Daniel and his white Vans.