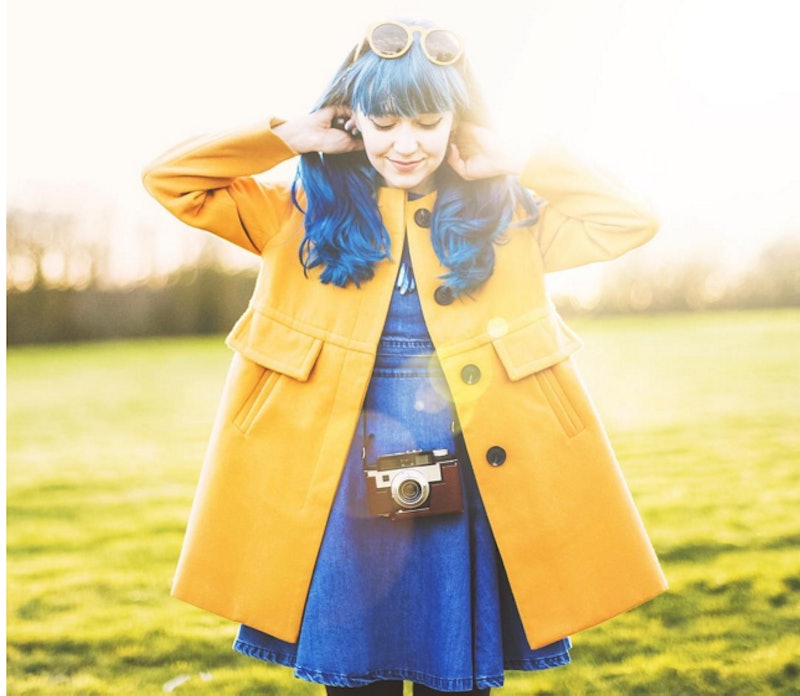 Think back to the last time you had feelings of awkwardness. It was pretty cringe-worthy, right? A lot of fidgety foot shuffling, sleeve pulling, and arm crossing was probably involved. But when you're intimidated or thrown into the spotlight, it's hard to remember how to stop feeling self conscious. You begin to entertain the idea that all eyes are on you and that you're on a short countdown before everyone watches you crash and burn and label you as the one that hasn't her stuff together.

It makes you feel less than those in the room with you, gives you prickly flushes on your cheeks, and makes you want to go find the nearest blanket and hide under it. It's the worst. But it doesn't always have to be that way! Self consciousness is a self-inflicted state of mind, one where you think you don't measure up the people in the room with you and that all eyes are constantly on you. but honestly, how much truth is there to that? In order to beat self consciousness, you need to learn how to control those paranoid, over-shooting thoughts, and I'll tell you exactly how to do that. Below are seven tips on how to stop feeling self conscious next time you're outside your comfort zone.

1. Shrug Away Your Negative Thoughts

I know — this sounds easier said than done. But if you really want to get over your self consciousness, you need to practice shrugging away your negative feelings instead of agreeing with them. Notice how I didn't say "pretend they don't exist." We all struggle with self-doubt and find things to nit-pick, and pretending that those blimps don't pop up won't stop you from indulging them. Instead, acknowledge that they're there, but refuse to agree with them.

Margarita Tartakovsky, M.S., associate editor at PsychCentral explained, "One of the reasons we become self-conscious is because we worry that others will only confirm our own negative thoughts." So every time you're awkwardly hovering at a party and think "People will think I'm a loser," or feel nervous getting into your bikini at the beach because you're thinking "People will stare at my tummy," refuse to believe that that's true. Believe that no one there is agreeing with you. Having a moment sitting on the couch and sipping your vermouth or having a jiggly tummy are in no ways bad, so teach yourself to not agree with those moments of negativity.

2. Don't Put People On A Pedestal

Say you have to lead a meeting at work for the first time, and you're absolutely self-conscious. The main reason for that? You think that everyone in that room is more professional and a total pro when it comes to the material you'll be presenting. While that may be true in some cases, a great way to get rid of your self-consciousness is to stop putting those around you on a pedestal. Lifestyle writer Mike Bundrant from Lifehack explained, "Often we feel inadequate because we see others as ‘more than’ and ourselves as ‘less than’ by comparison. We see others as having it all together and not suffering the way we are. This is rarely true."

Remember that they're people, too — they have embarrassing moments, go through work blunders, have to do pep talks in the mirror in the bathroom, and have the same stresses as you do. It's not like they have it all together and you're the only one that feels like they're keeping it all together by the threads.

3. Imagine Your Best Friend In This Same Situation

What if your best friend recounted a moment where they walked in to meet a date and felt completely inadequate and unsure if they could charm their socks off? Or what if they arrived to a networking event and just slinked in the corner all night because they felt too self-conscious to mingle? What would you say to them? Probably a tirade of positive and ego-boosting things.

Lifestyle writer Steve Errey from Lifehack was the one that posed this idea. He said, "Look for the patterns of thought that take you to a place where you start second-guessing or over-thinking. Now imagine that your best friend went through exactly the same thought process and ended up holding themselves back – what would you want to say to them?" Next time you're feeling awkward and shifty in a situation, imagine your best friend doing the same thing and give yourself the exact same pep talk and self-love session.

4. Accept Yourself, Wonderful Faults And All

A big reason we feel self-conscious is because we feel like our "faults" make us lack something special. But if you learn to accept yourself wholeheartedly, you begin to believe you're worthwhile and bring something amazing to the table, regardless of what you're lacking. That way, if you walk into a party and know no one, you don't begin to automatically fidget with your sleeve, because you know you're about to blow someone's socks off with your interesting conversation. Knowing that you're valuable and significant regardless of imperfections allows you to square your shoulders a little easier.

Psychologist John Duffy, PsyD pointed out to PsychCentral, “[Many people] fail to see their strengths and cling to antique scripts they carry about their lack of worth.” Don't be one of those people!

5. Seriously Though, No One's Paying Attention

Keep this little tidbit in mind: Everyone else is so jumbled up with their own thoughts, worries, and struggles with their own confidence and general going-abouts that they have little time to dwell over (and memorize) any awkward blunders you might have bungled up. Lifestyle writer Martha Beck from Oprah clarified, "The spotlight effect makes most of us assume we're getting about twice as much attention as we actually are."

So while, yes, your cheeks might burn if someone witnesses you crash and burn at flirting with someone at the bar, it's really never, ever as dire as you're imagining it. Don't exaggerate! They might have witnessed it, but they'll soon be going back to their own thoughts.

Feeling like you want to nervously fidget with a button over something you're about to attempt? Instead of slinking away, go all in. Beck explained, "I've been experimenting with this in many different circumstances: raising both my hands instead of one to ask a question of a lecturer I much admire; pausing twice as long for dramatic effect while telling a story to some friends; eating two servings of a fabulous dessert at a literary club luncheon."

What does that do? While before you were self-conscious, now by doubling your enthusiasm you bring a smile to the face of anyone watching. Watching someone do something with gusto makes them feel easier about the situation and just gives them a relatively good feeling, so channel those butterflies into excitement and go-getter-ness. There will be zero room for judgement when they're admiring your spunk.

7. Act On What's Making You Nervous

You'll never get rid of your self-consciousness if you just stew in it. Instead, force yourself to roll your shoulders and go do the thing that's making you feel awkward and nervous. The more you get out of your comfort zone and win, the more you'll understand that you don't need to let this feeling hold you back.

Bundrant from Lifehack confirmed, "When all is said and done, you need to just go for it! Confidence builds as you take positive action and begin to see positive results." So try and get as many positive results as you can. Remember — that's impossible if you let your awkwardness keep you in the sidelines!