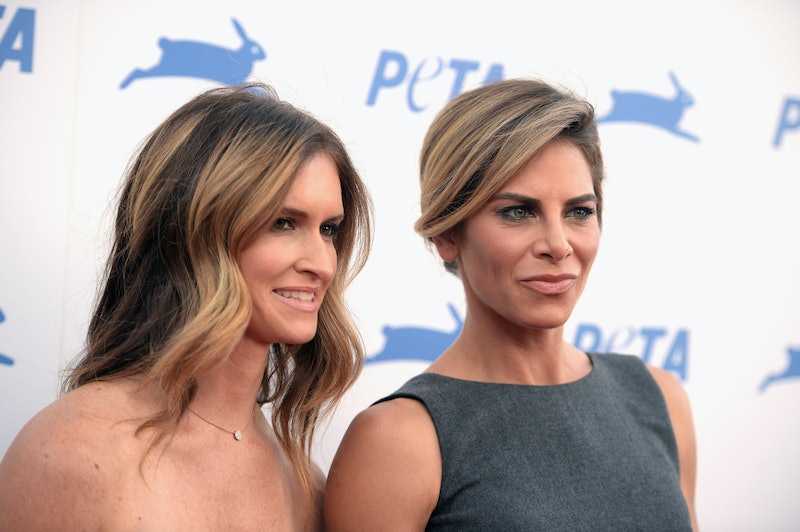 If you've ever watched a clip of Jillian Michaels yelling at contestants on The Biggest Loser or tried to sweat through one of her incredibly difficult workout videos, you probably think of her as tough and uncompromising. But, if you've ever watched through to the end of one of her Biggest Loser episodes or made it to the end of one of her incredibly difficult workout videos knows that Michaels is, at her core, a huge softie who just gets tough in order to promote what she thinks is true positive change in people. And, she's been showing her softer side on Just Jillian , her E! series, which shows how Jillian Michaels met Heidi Rhoades, her partner, and eventually formed the tight-knit little family you can see on the show.

According to an interview with People magazine, Rhoades and Micheals were introduced by a friend and were dating casually for three years while the trainer was trying to adopt a child. But, even though they were just getting to know one another things clicked into place for them at the right time. "Our relationship happened to intersect with my desire to be a parent, and Heidi was supportive," Michaels told People. Eventually, as their relationship became more serious, Rhoades decided to also try to get pregnant. "Heidi was feeling invested in us, and she was like, 'What if I try to get pregnant and whatever happens happens?'" Michaels told the magazine. Ultimately, Rhoades did become pregnant with the couple's son, Phoenix, within days that Michaels' adoption of their two-year-old Haitian daughter, Lukensia, came through, according to People. Now, the two are happily co-parenting their adorable kids.

But, Michaels didn't always make her personal life a part of her professional life — that's a recent development now that she's in a committed relationship with Rhoades. Michaels explained in an interview with Xfinity, "There’s still a tremendous amount of homophobia out there in the world, but it is what it is. I am who I am and the people in my life are who they are and they love us, hate us, for whatever reason. It is what it is."

But choosing to put their relationship on camera was another hurdle to get past, Michaels told Xfinity. "[Rhoades] is acclimating. She’s used to our lives being public [...] but actually being in front of the camera is a challenge," the trainer said. And, just like their relationship has blossomed incredibly quickly, so too have Michaels and Rhoades turned into a reality TV power couple!

Hopefully there's a lot more episodes of Just Jillian so fans can get to know even more about the couple and their cute family.