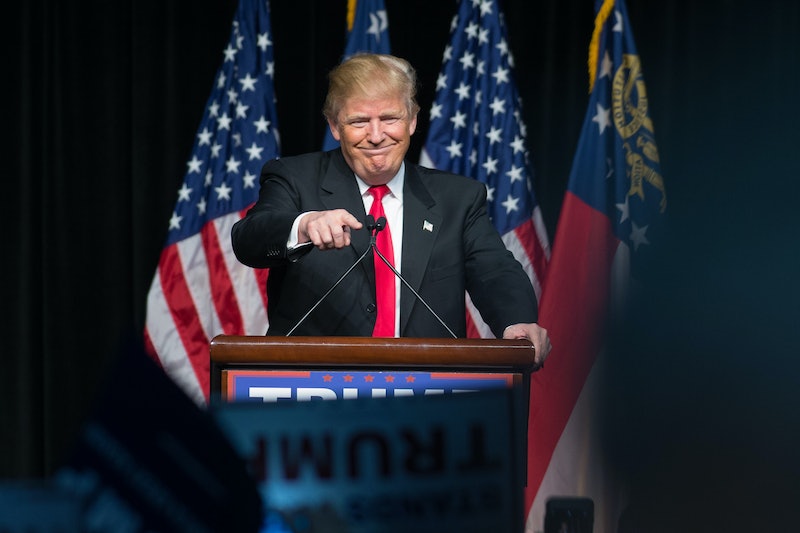 Donald Trump has brought no shortage of spectacle and theater to the 2016 presidential race. From his yuuuuge personality to his bombastic statements, many following the election have gotten their fair share of laughs from the real estate mogul turned reality TV star turned major political player. But politics isn't theater, and Donald Trump as a politician — as a front-running presidential candidate, no less — is not funny. That's the point columnist Ezra Klein emphasizes in a new video about Trump, and you should hear why Klein thinks he is so dangerous.

"Donald Trump is the most dangerous major presidential candidate in memory," Klein said. He explained the seriousness of the president's role, both domestically and internationally. The president is responsible for Supreme Court nominations, decisions of war, trade agreements; he or she also serves as a representative of the United States before the other countries of the world. Klein said, "This is not political entertainment. It's not entertainment at all. It's real, live politics." After listing some of the more extreme and offensive moments of Trump's candidacy, including his statement that Mexican immigrants are rapists and criminals, and his call to ban Muslims from entering the country, Klein made two important points that deserve our attention.

Klein first referred to the much-discussed moment at Trump's Feb. 8 rally in Manchester, New Hampshire, when a woman from the crowd yelled out that Sen. Ted Cruz is a p*ssy. Instead of ignoring her, Trump actually singled her out and asked her to shout it loudly so that everyone could hear. Then he repeated the word himself, and the crowd cheered. "What was so unnerving about this wasn't that Trump used a vulgar word," Klein said in the video. "It was the demagogue's instinct for finding the angriest voice in the mob and amplifying it."

Merriam-Webster provides the following definition of "demagogue": "a leader who makes use of popular prejudices and false claims and promises in order to gain power." By appealing to and amplifying base tendencies of rage, racism, sexism, and xenophobia, Trump encourages them.

Another important point Klein emphasized is Trump's lack of shame, calling him "a narcissist and a bully." Whereas most people feel a healthy sense of shame when caught lying or seen as being mean or uninformed, which keeps "politicians in check," Trump is decidedly lacking in shame. "He's got that reality television star's talent for not caring what he seems like on camera," Klein said. And that's "why he's dangerous. The fact that he'll do things that others won't means that he'll do things that, until now in American politics, we've been protected from." Trump doesn't exhibit any normal human tendency which serves as a check against dangerous behaviors like lying and cruelty. There's no telling what such a shameless president might do.

"There's something dangerous in Trump's rise. It isn't funny; we need to stop laughing. It's something we should fear," Klein concludes. There is indeed something frightening about a political figure who stokes prejudice and has no shame — and something even greater to fear about the amount of support such a figure has managed to garner.