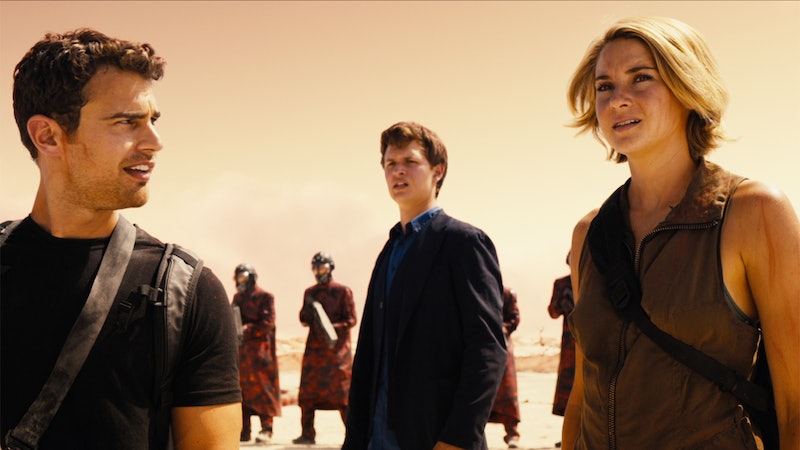 The movie adaptation of Allegiant is only weeks away, which means it's time to get excited. Veronica Roth's Divergent series hooked in readers on the first page, and before we knew it, we were fiddling with our thumbs waiting to get our hands on the next installment. It was full of action, drama, revolution, (and no love triangle), and it was also filled with inspiring quotes that would make great tattoos. I mean, Tris and Four are on board with tattoos, too, so it's a natural connection.

One thing I adore about the Divergent series is how big of a role tattoos play for the characters. When Tris decides to become a part of the Dauntless faction, she realizes most of the people around her have tattoos. And then we meet Four, or Tobias, who is covered in gorgeous tats. Along the way, tattoos represent much more than just ink and design. From ravens to faction symbols, there are plenty of tattoo ideas to feel inspired from within the books.

Every book lover holds a few books close to their heart, and if Divergent is one of yours, then maybe you've considered getting a tattoo to represent that. In case you're looking for an empowering and lovely quote from Veronica Roth to put on your body, here are 14 excellent possibilities:

2. "We believe in ordinary acts of bravery, in the courage that drives one person to stand up for another."

6. "I don't need to relive my fears anymore. All I need to do now is try to overcome them."

7. "Human reason can excuse any evil; that is why it's so important that we don't rely on it."

8. "Half of bravery is perspective."

9. "Sometimes people just want to be happy, even if it's not real."

11. "It's when you're acting selfishly that you are at your bravest."

12. "A chasm reminds us that there is a fine line between bravery and idiocy."

13. "Becoming fearless isn't the point. That's impossible. It's learning how to control your fear, and how to be free from it."