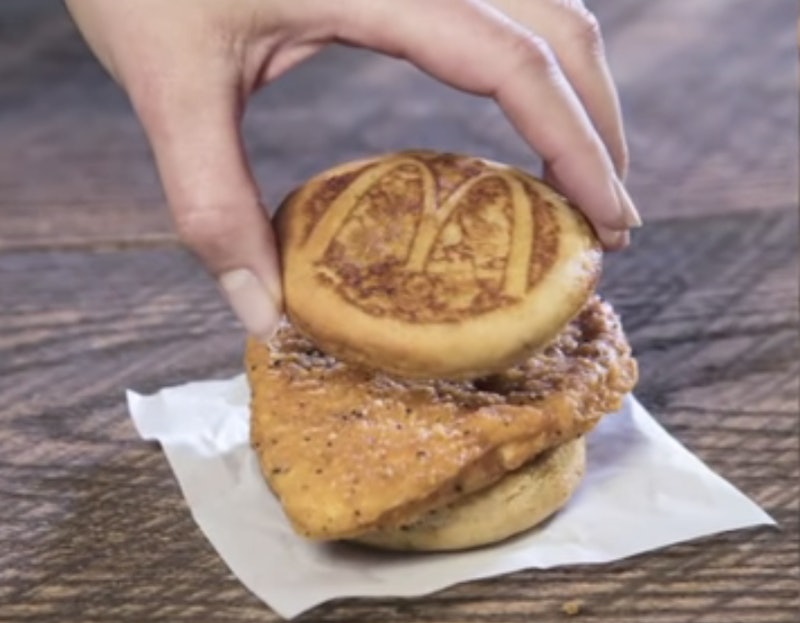 Good news for anyone living in Ohio, you can now order a pancake and chicken sandwich at McDonalds — but there's a catch. Only Central Ohio residents are invited to try this creation of pure deliciousness. It's called the Chicken McGriddle, and it harks back to the old southern tradition of chicken and waffles. A food so good, I'm surprised I haven't eaten it in the last week. Apparently McDonald's is trying something new this month and a few restaurants in Ohio are willing to be the testing sites.

The Chicken McGriddle is composed of two syrup pancakes, enveloping a chicken patty like a beautiful sweet blanket. I'm getting ideas just thinking about it. Anyway, the person responsible for pitching this new item on the menu is named Brian Mortellaro. He owns eight McDonald's restaurants and was the one to suggest this item to headquarters. If people start to respond positively to the Chicken McGriddle, maybe we'll see them popping up below our local golden arches. And I think I speak for us all when I say we want to see that as soon as possible.

In case you didn't know, McDonald's starts testing a lot of its menu this way. Both the Filet-o-Fish and Big Mac started as an idea and due to positive reviews and sales numbers they went national. So here is to hoping that the Chicken McGriddle perseveres and ends up seeing the light of day!

Here's the ~official report~ on this blessed sandwich:

I'm surprised there isn't more enthusiasm in the news reporter's voice! I mean, this is a brand new item for a huge food franchise, people! Even if you don't like the food, doesn't it excited you that there is something new?

I'm looking for something more along the lines of this. An extremely positive man who knows a news headline when he sees one.

This video brings up a great point about the limited menu for those of us not lucky enough to live in Ohio. In case you want to try the Chicken McGriddle yourself, all you have to do is order from the secret menu. As explained in the video, you would order a McGriddle off of the breakfast menu and then a plain chicken patty from the lunch menu. Combining them you would achieve the taste of the Chicken McGriddle.

While the video above advises people to time their McDonald's trip out in a certain way, you don't have to do that! Lucky for us, McDonald's has an all day breakfast menu now, so we can order the ingredients any time we want. Here is to trying new things and people getting more excited about a southern favorite!