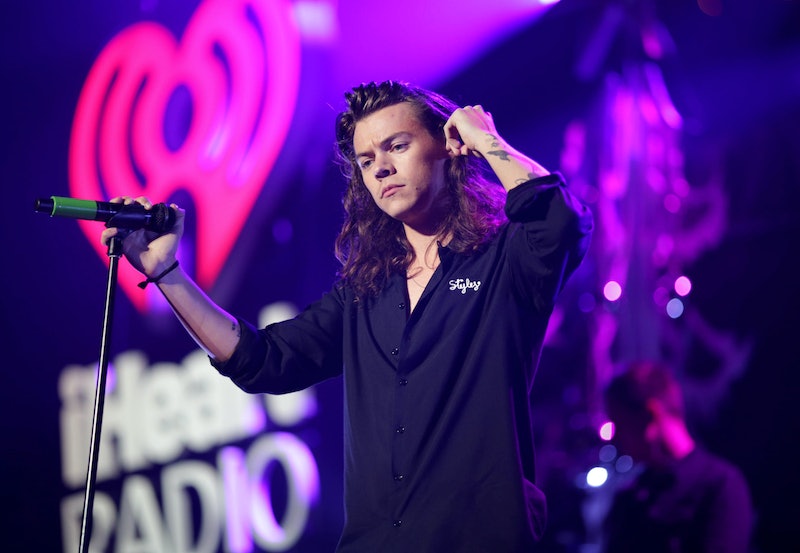 Now that the guys of One Direction are off pursuing their solo careers, fans are following every move they make in anticipation of any buzz worthy news. So, it's no surprise that loyal Directioners were quick to point out that Harry Styles has trimmed his hair after seeing photos of him with fans in London this week. Based on One Direction's final performance before the group's hiatus, these recent photos show that Styles has taken a few inches off his famous locks.

Ever since One Direction released its debut album back in 2011, we have all witnessed Styles' hair evolve from short curls, to boy band bangs, to a more rock 'n' roll pompadour hairstyle. The singer was even one of the few celebrities to introduce the man bun to the mainstream. But during the last two years, Styles' hair kept growing longer and longer, until he ended up with a lush, flowing mane that reached past his shoulders. Last December, TV host James Corden even asked if Styles was ever going to cut his hair or let it grow out. Styles said that he wanted to grow it long enough that he could donate his hair whenever he cut it.

However, based on the photos taken with fans this week, Styles' hair definitely looks a little bit shorter than usual.

Is he going to cut his hair even shorter or was this just his way of "cleaning up" after Kendall Jenner said that he smelled on Keeping Up with the Kardashians?

It's anyone's guess what Harry Styles is planning to do with his hair — maybe even dyeing it pink like Zayn Malik — but let's take a look back at the singer's most memorable hairstyle moments:

Before he went super long, Styles had a much tamer 'do back in 2014.

In 2013, he took the bangs off his face and debuted a stylish pompadour.

Styles rocked the man bun better than anyone.

His untamed curls and side swept bangs made him into a teen heartthrob early on in his career.