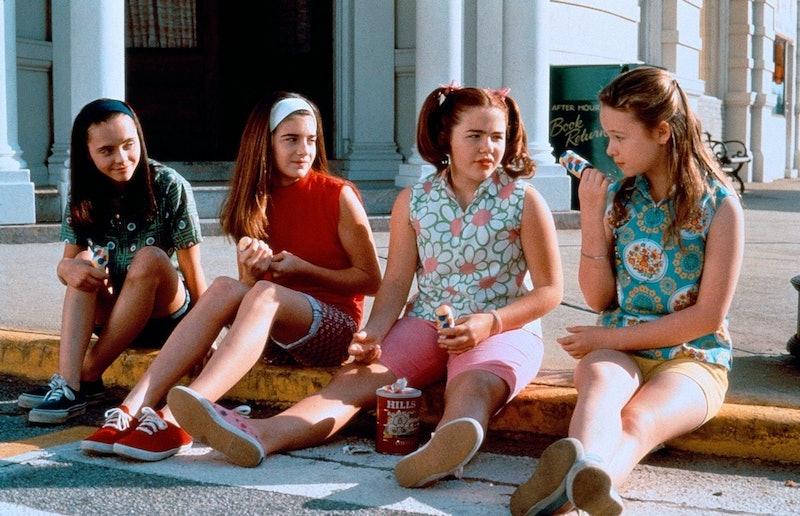 As a feminist and a movie lover, I often look at female-led films with a particularly critical eye. Are the on-screen depictions of women reasonable and realistic? Are they painted as uptight shrews or silly bimbos, rather than complicated, fully-formed people? Unfortunately, Hollywood has never been the best when it comes to showing women in the best light (or even featuring them at all) — but that just makes the feminist movies that do exist all the more important. Whether it's the female badassery present in blockbusters like Mad Max: Fury Road or the subtle heroism shown in dramas like Room, the female-led movies that get released every year tend to make a big impact, especially on young viewers just learning what it means to be a woman.

Because few things shape your ideas about feminism, at least in my experience, than the movies and TV shows you see growing up. I've written before about some of the pieces of entertainment that impacted my life as a girl and teen, from Buffy the Vampire Slayer to Beaches , but recently, I've thought a lot about one movie in particular: Whale Rider. I was fairly young when the 2002 film came out, and I soaked up every empowering moment; to this day, I still get chills when I think about that speech Pai, a girl vying for leadership in her male-led community, gives towards the end: "Soon everyone will be strong, not just the ones that've been chosen."

For me, Whale Rider made my pre-teen self consider feminism in an entirely new way, and its messages have stayed with me ever since. And while I don't know too many other people who love that film as much as I do, I know that they have their own movies that influenced the ways they viewed feminism and womanhood. Here's what 27 of them had to say.

"A League of Their Own ignited my 'why can only boys do this, it's not fair!' phase."

"It was about a group of close girl friends and how important those friendships can be — and that you don’t have to just be friends with boys to be 'cool.'"

"I probably have watched it roughly 200,000 times in my lifetime, and at the end when she’s captured by the evil guy and the prince goes to save her, he finally gets there and she’s all, 'I just saved myself because I know how to use a sword, but thanks anyway dude.'”

"Reese Witherspoon's portrayal of June Carter was so incredibly powerful and demonstrated how she challenged the misogynist country music industry by owning her two divorces, advocating for what was best for her kids even when it made her look like a bad person, and refusing to compromise her morals for a man. Like, if Johnny Cash didn't fix his sh*t up, she wasn't going to be with him no matter how much she liked him. I found that really impactful."

"Female characters are spread throughout the good to evil spectrum, and solve their problems with increasingly clever methods — it doesn't pigeonhole women into one type and shows what I think is a realistic and powerful depiction of a young girl."

"Because they were bad bitches who weren't afraid of no ghosts."

"Rosalind Russell is a journalist in a man's world who wins epically. She's brash and smart and unfiltered and made an incredible impact on me."

"It was one of the first movies I saw where the female protagonist's career was the main source of conflict and debate instead of her relationship — there's a romance subplot, but it's definitely secondary. The whole movie is her learning to have confidence and draw inspiration from other female role models (hellooo Julie Andrews). And eventually (spoiler, I guess?) she learns the confidence to assume a difficult role."

"It's one of my favorite movies, she has super powers, she's smart, and she stands up to people."

"I grew up watching a lot of silly action movies where the damsel in distress cries and screams and has to be rescued. But seeing Leia OWN those stormtroopers, Han, and Vadar without breaking a sweat and rescue her own damn self made me believe that women can and should hold their own."

"Matilda stands up to her parents and to authority. And she reads books."

"Mulan made me a feminist because that movie was all about having balance and being yourself. She didn’t fit as a girly girl but she also didn’t fit dressed up as a man in the army. Mulan was only happy when she returned home, her hair short, a sword in her hands, and a dress on her body —to be both, to be herself, to be whoever she wanted to be, and to be loved for that."

"A female protagonist who uses her own abilities and judgment to save the people she loves even in the face of great opposition."

"Frida is a bad bitch. She and her art subvert the constraints of sexuality and machismo."

"I have to go with Kat in 10 Things I Hate About You because she was smart, sassy and made being the intelligent one way cooler than the cute ditz. Also, it made me want to learn how to play the guitar."

"Hermione is both smart and a badass."

"There was definitely enough chatter about sexuality and being a woman that, at that age, you just didn't address. (Or was really embarrassing to address.) In fact, I was almost too embarrassed myself to watch it. But there was something about watching relatable young actresses like Thora Birch and Gaby Hoffman talking about those issues that made it all the more acceptable."

"I was always so envious of how exciting she made her days. She got to solve mysteries and spy on people, and was really confident."

"I remember watching A League Of Their Own when I was six or seven and finding it really exhilarating to see women taking on traditionally male roles and being empowered by and praised for it. A big part of it was that I was (am) a huge baseball fan, and it was so exciting to realize there was a small chapter in American history when women played professional baseball. It was exciting to think that could be an option for me (assuming I developed some athletic skill and coordination... which I did not)."

"It took Shakespeare and literature in general at its most misogynistic and made it into a masterpiece."

"Elle Woods is sort of an unlikely feminist hero of mine. Even though she went to Harvard for douchebag Warner, the film slowly shows the importance of standing up for your beliefs, being proud of who you are (no matter how much you like pink), and how much women can help each other in a world that is decidedly a man's one. I even quoted Elle in my college application — and it worked!"

"It can sort of be viewed as simplistic, binary feminism (woman has to become a man to get ahead in man's world) but it certainly helped spell out the gender imbalance to my young mind. Also, let's be real, the end of "I'll Make a Man Out of You" when she makes it to the top of the pole when all the whiny dumb men couldn't is the greatest moment in cinematic history, tbh."

"The relationship between the sisters and the ambition of Kit was something I really latched onto. As a kid that cried on the regular, it was nice to see grown women crying over baseball and still winning the day."

"Summer is complex and confused, a character who subverts the stereotypical female role in romance movies."

"It was the first time I watched a female character actively take control of her own life in a bad situation. Also because I was like, omg, do I also have super human abilities? Probably."

"It was the first time I saw a female act like a rebel, talk back, be blunt AF, and still get a happy ending."

From '90s sleepover staples to dramas released just a few years back, the movies above have clearly affected women in some pretty huge ways — so next time you hear that the reason more female-led movies aren't being made is because they don't have an impact on audiences, here's the proof that it couldn't be farther from the truth.

More like this
Sandra Bullock, Girlboss Extraordinaire
By Matt Harkins & Viviana Olen
Lydia Leonard Is Setting The Record Straight
By Olivia-Anne Cleary
This 'Hunger Games' Alum Will Star In A New Medical Drama Titled 'A Mistake'
By Alyssa Lapid
One Powerful Quote In 'Doctor Strange 2' Is Going Viral On Twitter
By Alyssa Lapid
Get Even More From Bustle — Sign Up For The Newsletter