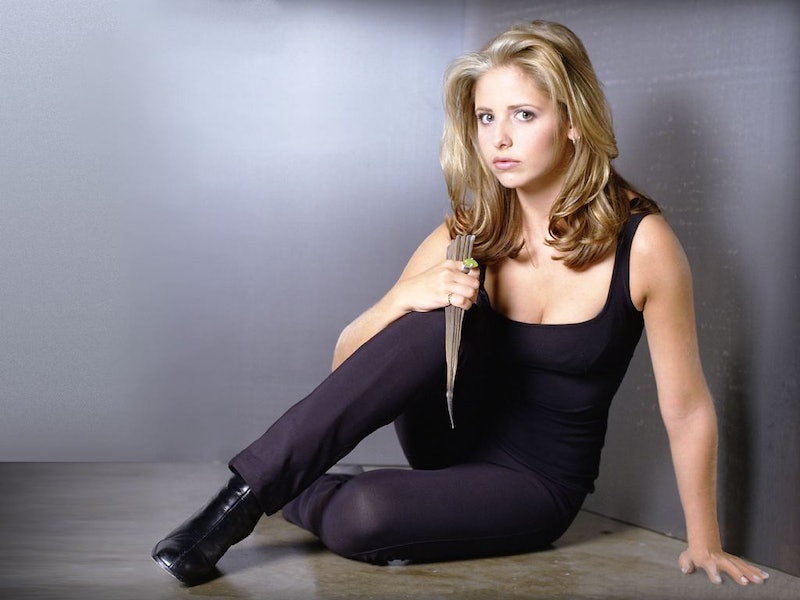 Like many women, I'm proud to call myself a feminist. For me, the term feminist signifies my desire for equal rights, but it also means empowerment, independence, and support for and from other women — all things I can get behind one hundred percent. I've always embraced my feminism, and I can't understand those who don't. To me, if you identify as a woman and you support your own rights, then you're a feminist.

But until just a few years ago, I didn't even know that I was one. In every sense of the term, I was; I championed equality, supported other women, and wanted nothing more than for my work and character to be judged based on merit, not gender. Yet I simply hadn't heard the word "feminism" enough, at least in its post-1970s version of it, to apply it to myself.

Yet of all the aspects of my life that have led to my feminism — my mother, my education — perhaps none was more influential than my love for entertainment. Growing up in a household where DVDs stacked the counters and evenings centered around episodes of The West Wing, I was exposed to pop culture early and regularly. The movies and TV shows I watched influenced my feelings, my hobbies, and most certainly, my feminism. Yes, I probably would've become a feminist even without a VCR, but would it have been nearly as fun? I highly doubt it.

Below, here are the nine films and TV shows from my childhood that most shaped me as a feminist, ranked.

People who say Dirty Dancing is just about romance are completely missing the point. Yes, Baby gets the guy, but she also comes into her own, discovering strengths and beliefs she didn't know she had. She gains confidence, stands up to her father, explores her sexuality, and best of all, she doesn't feel shame. Baby is already rightfully iconic for her crop tops and seduction of Patrick Swayze, but her feminist attitude should be added to the list.

Mona Lisa Smile is probably not nearly as good a movie as I remember it being, but I love it all the same. I was 10 years old when it came out, and I distinctly remember leaving the theater thinking one thing: the right path for one woman isn't necessarily the right path for another, and that's perfectly okay. Or, as Amy Poehler would say a decade or so later: "good for her, not for me."

Matilda Wormwood survived abuse, found a role model in a female teacher, and did everything in her power to get the education she knew she deserved. She's a feminist icon, and as a child in the '90s, she was one of my most loved movie heroes. I'm grateful to have had her.

"I am a princess. All girls are! Even if they live in tiny old attics, even if they dress in rags, even if they aren't pretty, or smart, or young, they're still princesses — all of us!" Damn straight.

I'm a sucker for movies about female friendship. From Steel Magnolias to A League of Their Own, there's not a film about female bonding that I don't love, but Beaches takes the cake. The story of C.C. and Hillary, whose friendship survived long distance, painful fights, and debilitating disease, moves me every time I see it (which is a lot) and reminds me of the great power bonds between women can hold. Yes, Beaches is cheesy, but its themes of supporting other women, being there for one another, and cheering each other on with each accomplishment and joy couldn't be more powerful.

Olivia Pope gets all the credit, but in my opinion, Shonda Rhimes' most feminist heroine is Grey's Anatomy 's Meredith Grey. For 11 years, viewers like myself have watched her transform from a flighty, silly intern to a mature, wise attending, all while staying true to her values: family, friendship, and the power of tequila.

It's not just Meredith that makes the show so feminist, though: There's Cristina's decision not to have kids, Callie and Arizona's relationship, Izzie's modeling background, and so much more. I'm proud to be a fan of Grey's, and I'm grateful for the feminist role models Shonda Rhimes has put on my TV for the past 11 years; women who stick to their morals, work for what they want, and remind each other that "he is not the sun. You are."

Girl hears that only boys can be leaders, decides that's not okay, fights to be chief, becomes chief. Whale Rider is a marvel of a movie, one whose feminist themes and images — Pai in that final, extraordinary scene — have stayed with me for 13 years and counting.

As an only child, I often watched whatever shows my parents were into, whether or not they were appropriate. I fell asleep to the sounds of Jed Bartlet, the Dancing Baby, and, more often than not, Buffy the Vampire Slayer. Yet as the years went by, my memories of the show faded, so a few years ago, I re-watched the entire series. Then, I did it again. And again.

Buffy is my all-time favorite show for dozens of reasons, including its proud displays of feminism. Whether it was Buffy fighting demons, or Willow claiming her power as a witch, or the events of the series finale, in which thousands of girls across the world realized their own strength, Buffy constantly reinforced its feminist themes.

Like all children of the '90s, I grew up devouring the offerings of Nickelodeon and the Cartoon Network: Rugrats, Hey Arnold, Dexter's Lab. Yet no show was as important as my beloved Powerpuff Girls . For years, my Saturday mornings were filled with whatever villain was wreaking havoc on Townsville, USA that day; whether it was an evil monkey, pre-teen boys, or, worst of all, Him. My love for the series influenced several aspects of my life, from my second grade Halloween costume (Bubbles, duh) to my short-lived career in tae kwon do to, most prominently, my feminism.

Watching three girls — kids, no less — take down criminals, beat up bad guys, and fight to be treated fairly had a profound impact on me, whether or not I realized it at the time. Like most kids' shows, much of Powerpuff's material went over my head, but whether or not I truly understood the feminist meaning of the "Equal Fights" episode, in which a villain named Femme Fatale tries to steal Susan B. Anthony coins from banks, was irrelevant.

The show's message sank in, loud and clear: being a girl was cool. And being a strong, smart, capable girl who looked out for her own kind? Even cooler.