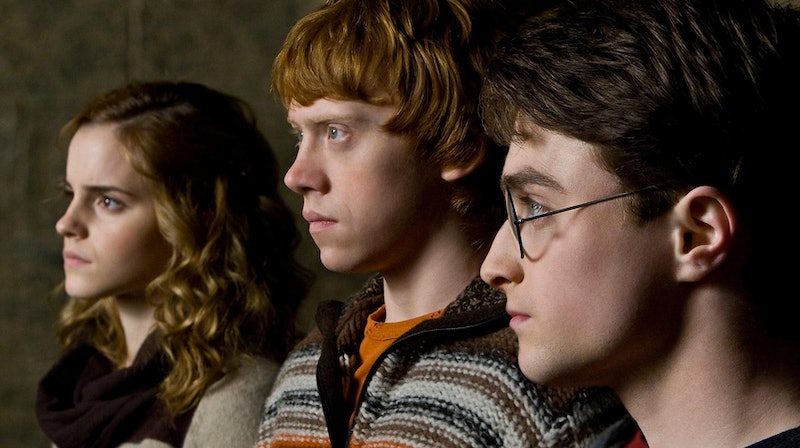 J.K. Rowling just made a very interesting statement. There are a few things you should know about me before we jump into the details: I taught a class on Harry Potter for three out of four of my college years. For two of those years I was a member of my college's chapter of the Harry Potter Alliance (I was co-chair for a semester of that time). Most of my longest-lasting and deepest friendship have been forged in a love of Harry Potter. So when J.K. Rowling says she regrets paring Ron and Hermione together — I pay attention.

Rowling made this revelation in the most recent issue of Wonderland , which Emma Watson guest edited. Here's what she said:

I wrote the Hermione/Ron relationship as a form of wish fulfillment. That's how it was conceived, really. For reasons that have very little to do with literature and far more to do with me clinging to the plot as I first imagined it, Hermione ended up with Ron.

I know, I'm sorry, I can hear the rage and fury it might cause some fans, but if I'm absolutely honest, distance has given me perspective on that. It was a choice I made for very personal reasons, not for reasons of credibility. Am I breaking people's hearts by saying this? I hope not.

This is, to say the least, a very complicated revelation for the incomparably large and devoted Harry Potter fandom. On the one hand, she's J.K. Rowling, the mother goddess of this universe, and she can feel however she wants about what she created. On the other hand, you can't just do this to me, Jo.

My personal opinion, since you begged to know it, has always been that I kind of liked that it never once felt like Hermione was there to be the love interest to the main character — that it remained platonic meant something to me, and I thought it said something cool about male/female friendship that nicely cut against the When Harry Met Sally idea that the culmination of a male/female friendship was most valuable if it was romantic. I have a lot fewer opinions on the sanctity of Ron and Hermione as a couple than I do about the fact that I never wanted Hermione to end up with Harry.

What seems to have happened is this: J.K. Rowling conceived the idea of a Ron and Hermione relationship near the very beginning of the process of writing Harry Potter. As she said above, it was apparently wish-fulfillment — considering she also said it was a decision very much influenced by her personal life, one can posit the storyline was established based on some similar dynamic she had with someone she knew, perhaps even the friend who helped inspire Ron, Sean Harris. Time and distance, of course, will often change one's opinions about both one's relationships and one's work, however, and so her opinions of all of the above changed.

But what it also boils down to is this: Harry Potter belongs to J.K. Rowling. It always, always will. But books also belong to their readers. And those readers, for better or for worse (there certainly exist strong sides for both cases), were given Ron and Hermione and Harry as written. That doesn't just go away because J.K. Rowling decides to tell us she changed her mind.

Because here's another thing: Fandom is bigger than authorial intent, to an epic extent. Harry Potter will live long past all of us, and even as it is now it exists in realms that even J.K. Rowling cannot touch. Rowling's Pottermore reference to Remus Lupin's love of Nymphadora Tonks and platonic feelings towards Sirius Black certainly crushed some shipper's souls at the thought that their Remus/Sirius theories might not ever be canonically confirmed — but that was far from the end of the discussion. Wolfstar will live to see thousands more days, even if Rowling claims the narrative doesn't support it.

But let's not let it end there. Whether or not it's what she pictured on that train all those years ago when she first dreamed up Harry and his world, Harry Potter is bigger than J.K. Rowling now. It's bigger than all of us. And strangely, that overwhelming largeness is what gives us the power to decide for ourselves what to do with all those words.