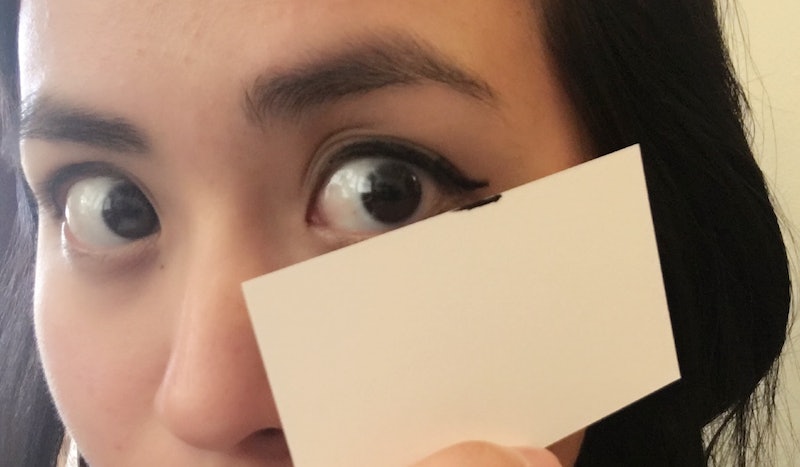 I'm really bad at putting on eyeliner. My eyes never look symmetrical and I always end up with too much on. I'm also bad at getting it to stay put. Within a few hours, my eyelids and under-eyes are inevitably greasy, and I'm sporting glorious raccoon eyes. Sadly, this makes me look like I've been crying. I've concluded that eyeliner is too much trouble to be bothered with, and a few years ago, I stopped wearing it altogether. But I'm a fan of YouTube tutorials, specifically eyeliner videos, and when I stumbled upon some really cool ones last week, I couldn't help but try my hand at it. And then I tried a few more, and things really got interesting.

The funny thing is, putting on eyeliner was a lot easier than I had remembered. And the makeup artists I watched shared some tips that I think are worth giving a try. I won't be replicating all of the looks that I tested out. But I think eyeliner might be making a second debut in my beauty routine. Here are six tutorials I followed, and what they ended up looking like on me.

My Face Without Eyeliner

This is what I looked like when I started my eyeliner experiment. Just to warn you, by the time I was finished, my eyes had been rubbed kind of raw. I don't recommend trying six tutorials in a row.

How To Apply Eyeliner

I watched this video first, since I figured it would be useful to learn some basics before trying anything tricky. While I liked how YouTuber roseannetangrs talked about the different places you can put eyeliner, and what part of the eye they each emphasize, I didn't really like the end result. I think I ended up with way too much eyeliner on my face.

This one didn't work too well. The makeup artist recommends putting small dots along your lashline to create a nearly invisible look. The idea is that you're lashes will look thicker, and no one will be able to tell that you're wearing makeup. Perhaps I didn't do it very well, but it was pretty clear that I was wearing makeup, because I could blatantly see the dots on my eyes.

This one was by far my favorite. As someone who's always been afraid of messing up winged eyeliner, I was pleasantly surprised by how easy this was. Makeup artist Karima McKimmie recommended putting eyeliner on your upper lid, and then smudging it into a nice wing with an angled brush. The brush made the eyeliner much lighter, and it was much easier to control than a pencil would have been.

I thought this one was be really cool, but I ended up a little disappointed. The business card was definitely good for getting a straight line, but because it was hard to see how much eyeliner was going on the card and how much was going on my face, I ended up with way too much on.

I was really excited to try this one. Even though I already knew it wasn't something I'd do on a daily basis, it was cool to try something a little more interesting. I was a little intimidated too, because it looked pretty complicated. But I was surprised by how well it turned out (for someone who'd never done it before). Unfortunately, while l think the look is great on YouTuber Destiny Godley, I don't think it works on me.

All The Way Around The Eyes

I did an OK job on this one. But again, I think the look is too much for day-to-day use for me. However, I actually think that if I wore more makeup with it, like dark eyeshadow and mascara, it would look less severe. Though I probably would only wear it at night.

I see why people like eyeliner. It's fun, and it definitely changes how you look pretty dramatically. It was easier than I expected too. I still think it's too much work to wear every day, but perhaps I'll give it a try again next time I feel like dressing up.

More like this
TikTok Made Me Add Blush To My Undereye Concealer — And It Worked?!
By Casey Clark
5 Easy (& Wearable) Red Eyeliner Looks To Try
By Olivia Rose Ferreiro
'The Circle' Season 4 Star Yu Ling Wu Is Already A Beauty Icon
By Erin Stovall
10 Swoon-Worthy Beauty Looks From The 2022 Cannes Red Carpet
By Olivia Rose Ferreiro
Get Even More From Bustle — Sign Up For The Newsletter