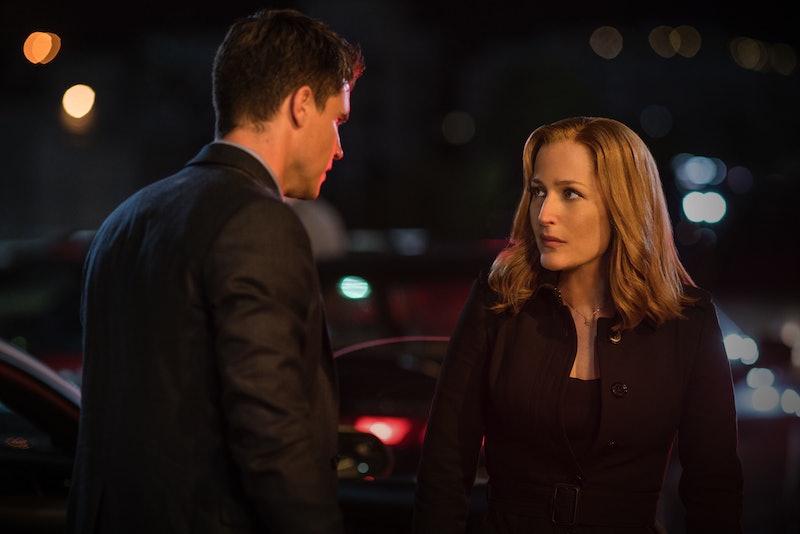 Throughout the revival, it's been no secret that there's a conspiracy of men on The X-Files — but the details were, of course, left deliberately unclear until the Feb. 22 finale "My Struggle II." When the episode kicks off, Tad O'Malley has gone public with claims that alien DNA is lurking in every citizen, put there without our knowledge. Mulder is en route to South Carolina after being summoned by the Cigarette Smoking Man and, as Scully watches countless people be hospitalized with deadly ailments, even she acknowledges that the country is in massive trouble. The ever-skeptical Einstein isn't buying it, but she lets Scully draw her blood to test it for alien DNA — then Agent Reyes contacts Scully and alerts her of what's really going on.

The CSM summoned Reyes while he was hospitalized from the missile attack in the Season 9 finale "The Truth" and offered her a deal — protection from the outbreak that's currently afflicting the entire population. The reason Scully hasn't, and won't, fall ill is because she has alien DNA in her genome as a result of her abduction. (This also means that William, her child with Mulder, is protected.) The alien DNA is far from deadly — it is, in fact, the only way to survive and everyone without it will die.

In South Carolina, the CSM makes Mulder an offer that will save his life and ensure him a seat at the table of the most powerful men in the world — but, in a turn of events that surely shocked no one, Mulder declines once he realizes Scully's DNA will keep her safe no matter what. He's getting sicker by the minute, but he'd rather die than compromise his morals and beliefs. Miller, who has also fallen ill, comes to get Mulder and they make their way back to D.C. to find Scully.

Even as Einstein begins to exhibit symptoms of the illness, she and Scully work tirelessly to extract Scully's alien DNA and use it to create a vaccine. Once the afflicted are injected with it, it will save their lives. As always, Scully's the one to stay as calm as possible and use her intelligence to save the day (and, in this case, humanity itself). After creating the vaccine, she leaves Einstein and her co-workers at the hospital with instructions on how to implement it and desperately tries to reach Miller and Mulder on a packed, gridlocked highway. Via Tad O'Malley, we learn that deaths have been reported all over the world and when Scully finds Mulder, it looks like he could be next — she quickly realizes that her vaccine isn't enough to save him and her only hope is to locate their child and put his alien stem cells in Mulder.

The situation appears hopeless as Scully explains to Miller that she doesn't know where William is and Mulder is running out of time. Bright lights appear in the sky, which may signal that a miracle is on its way — William is, after all, a miracle child and he may have arrived to save his father. Still, the cliffhanger was an unsatisfying conclusion to an action-packed episode.

The highlight of the finale was seeing that, 23 years later, Mulder and Scully have still refused to compromise themselves or their morals despite all they've been through. This episode did bring out the best in both characters — Scully's combination of scientific knowledge and willingness to "believe" allowed her to save countless lives and it's wonderful to see such an intelligent, empowered female character emerge as the show's true hero. Meanwhile, Mulder was willing to sacrifice his own life rather than compromise his morals — but only after he realized Scully couldn't be harmed as a result of his decision.

The qualities we love about both characters were on full display in this episode and, in that regard, it was a fitting way to end the revival. But, with no confirmation of Season 11, I think Mulder, Scully, and their fans deserved a better conclusion than this.