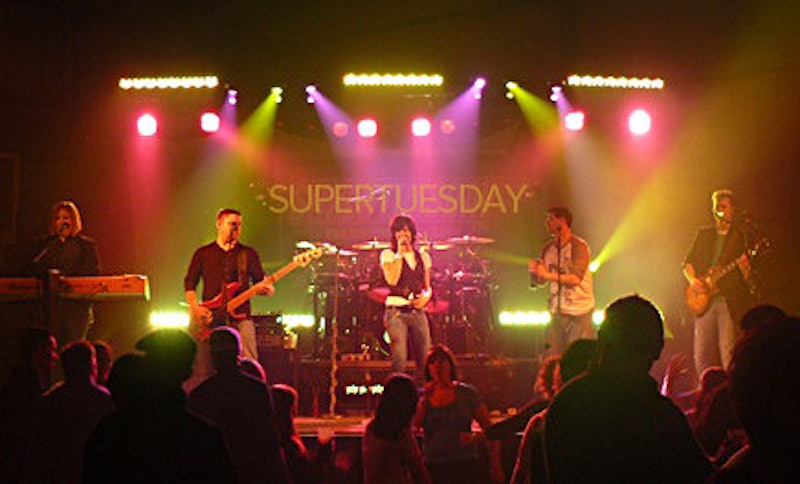 If you figured Iowa's caucus and New Hampshire's primary were a big deal — and as the first states to elect presidential nominees, they definitely are — you're in for a treat. Super Tuesday, which lands on March 1 this year, is, hands down, one of the most important days of the election season. Campaign efforts are escalating and suspense is building because in total, Super Tuesday will host over a dozen elections across the nation. But, let's not forget. The first Tuesday in March isn't just a day to visit the ballots — Super Tuesday is also the name of a band. According to its website, SuperTuesday is a four-piece band from southern Wisconsin that has been playing alternative music for 20 years now.

Seriously, listen to one of their song on the way to the ballots. On its website, Super Tuesday the band list a wide variety of musical influences including Bruno Mars, Michael Jackson, Poison, and Journey. To sum it up:

Performances are more fun than a barrel of monkeys, thanks to slightly crazy fans and a fair amount of Bud Light and Captain Morgan.

This band is down to party and what better way to celebrate the biggest election day of the year?

Unfortunately, fans won't get the opportunity to see SuperTuesday play on Super Tuesday. However! The four piece will be playing just a few days later on March 4 at good 'ol Bowl-A-Vard Lanes in Madison, Wisconsin. And in case you need a preparatory "driving to the ballots" jam-band-esque song...

A week after Nevada's Republican caucus and South Carolina's Democratic primary are finished, 12 state elections will take place — Alabama, Alaska, Arkansas, Colorado, Georgia, Massachusetts, Minnesota, Oklahoma, Tennessee, Texas, Vermont, and Virginia — as well as in the territory of American Samoa. Popular predictions and national polls favor Donald Trump for the Republican nominee and Hillary Clinton for the Democratic one. Russ Schriefer, a veteran of past Republican presidential campaigns, told The Washington Post's Philip Rucker and Robert Costa that based on how elections have panned out thus far, Trump has a pretty good chance of taking the Republican nominee cake.

Trump will win everything until it's a two-person race — and he's going to win it by a lot. There's a real risk that we could wake up on March 2 and Trump would have won the most number of states and have received the most number of delegates.

In the Democratic race, winning over Super Tuesday's super delegates will be the topic of concern for Bernie Sanders. He is currently trailing far behind opponent Hillary Clinton, who already secured over 500 "wild card" delegates before the elections even started.

According to RealClearPolitics's most recent polling averages, Trump led national polls with 35.6 percent support. Ted Cruz trailed nearly 16 points with 19.8 percent support, followed by Marco Rubio in third at 17.4 percent. The Democratic race is turning out to be much closer as Hillary Clinton leads Bernie Sanders by a seven-and-a-half points. SuperTuesday — the band, of course — has yet to make an endorsement.