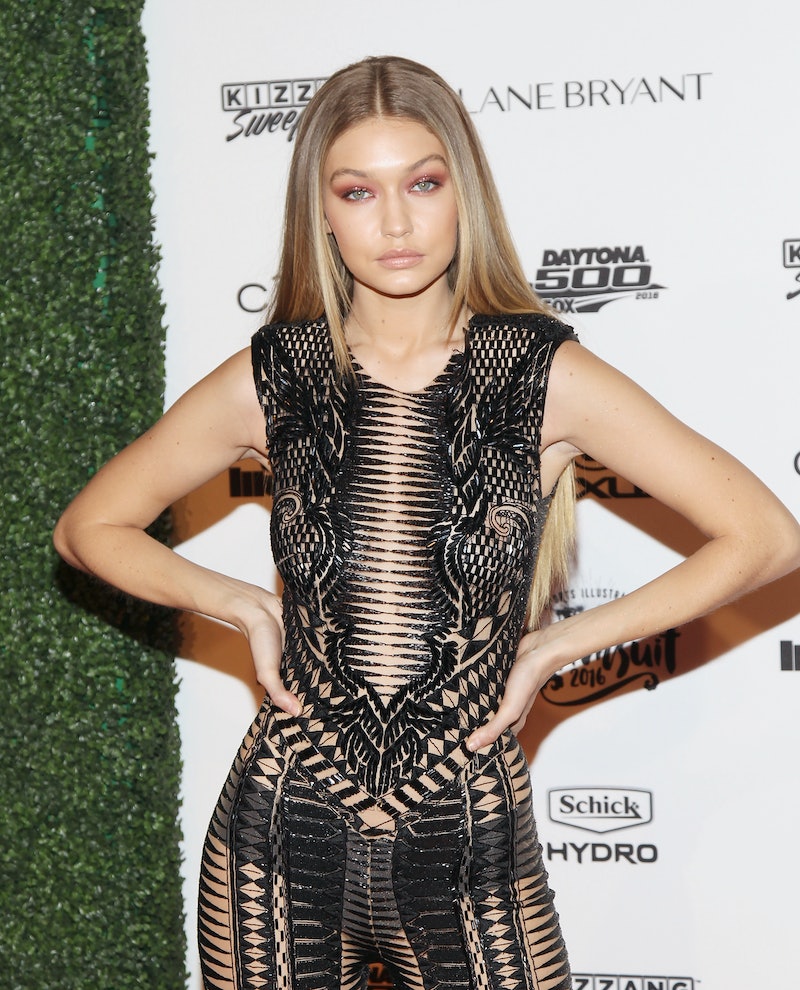 There is a new Photoshop controversy brewing. Gigi Hadid nabbed the Vogue China cover for the March 2016 edition, looking (mostly) like her usual gorgeous self, thanks to her piercing and sultry blue eyes, her arched brows, and her abdomen. Actually, it's the supermodel's stomach that's causing the commotion. What's different about Hadid on this Vogue cover? Well, the brown moles that are normally sprinkled all over her belly area are totally erased. MIA. Gone. And her fans are not happy about this edit.

When Hadid posted a body positive message on Instagram last fall, declaring that the haters who criticize her look, her career, and her runway walking style would not effect her or weaken her resolve, it was a huge moment. It demonstrated that she could and would use her fame to encourage and inspire others. But this could be a setback for that message and her credibility, even though Hadid likely had nothing to with the photo editing.

Bustle reached out to both Hadid's rep and to Vogue China for comment. We will update this post if we get a response.

Let's take a look at Hadid's Vogue China cover, which she promoted on her Instagram feed last week. Her tummy region is completely and totally freckle/mole/beauty mark-free.

If you didn't know about Hadid's moles and are just a casual fan, as opposed to a super one, you probably wouldn't have noticed.

However, you can clearly see her moles here.

That said, this Photoshop incident has sparked the ire of Hadid's core fans. Many asked, "Where are your moles?" or simply noted that the pics were obviously edited.

One fan posted this comment on Hadid's Insta of the cover: "Can't believe they photoshopped your moles out and u still promote it. how sad seriously."

As I stated, Hadid may or may not have had final approval of this cover. If she did, then fans are bummed at her for letting such editing happen. But even if she didn't have the final say, they were equally disappointed that she still promoted the cover and didn't speak out about such changes being made to her body in the editing process.

However, another comment read as follows: "The Chinese market really values fair, blemish free skin — it's how they would photoshop any celebrity. It's just a different demographic guys."

Another defended Hadid, posting: "If u google image her photos everyone photoshops her moles out. Look at sport illustrated!"

It's understandable that fans would be let down, since Hadid showed flashes of being body positive and she is in such an incredible position where she can use her platform to encourage fans to accept themselves as they are. It's also understandable that Hadid would want to promote her hard-earned Vogue China cover, editing or no editing. Clearly, the issue is divisive.