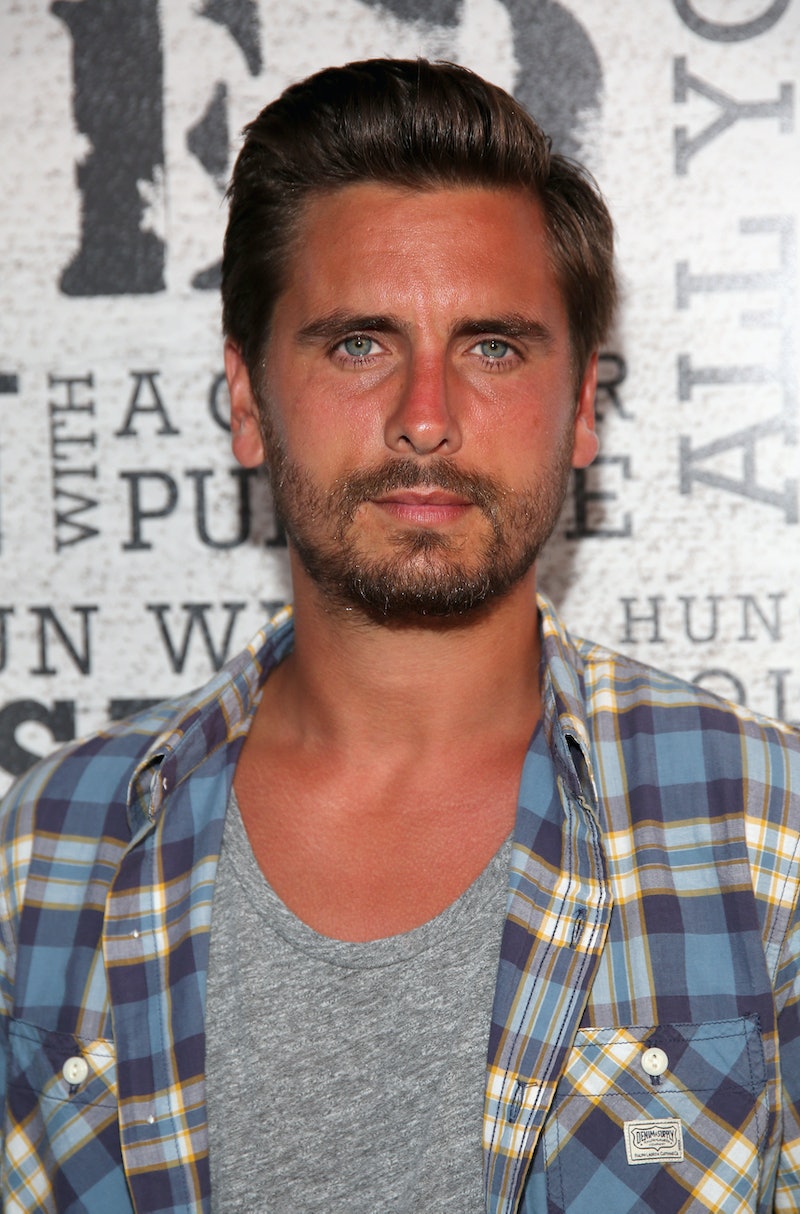 You may want to sit down for this. In a surprisingly sweet turn of events, Scott Disick went to Robert Kardashian's memorial dinner. For real. Kylie Jenner's Snapchat video provided the proof of his unanticipated presence on Monday night. Now, being that Disick is the father of three of Robert Kardashian's grandchildren, it doesn't automatically strike one as odd that he'd attend the occasion even if he and Kourtney Kardashian are broken up. After all, just because two parents are no longer together doesn't mean they can't spend time together with their kids. Well, that is if you're not considering one of the parent's behavior as of late.

What kind of behavior, you say? Well, his personal brand of whiplash-type activities. It seems that one second we get wind of a kind gesture towards Kourtney or an effort to be a more involved family man with his kids, and in the next breath we hear he's "partying until 5 a.m."

A source told People that in in New York City last week, Disick

...was a total mess. He was doing well for a long time. It's sad and worrisome. [Kourtney] won't tolerate him being around the kids if he is a mess.

I mean, could you blame her? I know I sure as heck don't. To make the head scratching even more intense, this partying took place about a week before he joined the Kardashian family for Robert's birthday dinner.

Yeah, a giant question mark just appeared over my head, too. Especially, because a source told E! News of his time in NYC:

From the minute he touched down, he's been a trainwreck. All anyone can assume is that he met up with the wrong people — people who don't really care about his well-being — and one drink led to another which led to another.

Bustle has reached out to Disick's rep regarding the reports about his time in New York City, but has not yet heard back.

On an even more confusing note, if that's possible, the season finale of Keeping Up With The Kardashians, which aired only a day before the dinner, showed Disick just finishing rehab, which gave many of us fans hope for a decline in the aforementioned whiplash way of life. Though, as People points out, in the finale:

In an on-camera confessional, a hesitant Kourtney admitted she wasn't quite sure how to behave now that her ex was back. Even though she said she was "proud of him" for completing the treatment, she wasn't sure 30 days in rehab was enough for her to completely regain her trust in him...

As it turns out, Kourtney is probably not as confused about his behavior as we might be, which is a good thing. Despite how back and forth his antics are to us, it's clear that Kourtney isn't letting it phase her and won't let it affect her kids getting to see their dad on a special and sentimental night. That said, though — Oh, Scott. Scott, Scott, Scott. What are we going to do with you?!