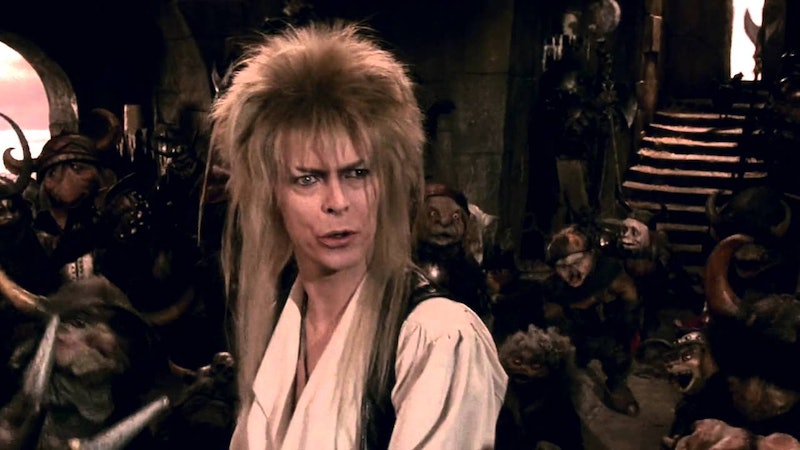 We're closing in on awards season fast, and chances are that you're still reeling over and replaying Lady Gaga's David Bowie tribute at the Grammys. It couldn't have been a more fitting homage to Bowie's career in music, TBH. But now, as the 2016 Oscars are swiftly approaching, I'm starting to wonder if we'll get another quick tribute to the Starman. Which may be a statement kind of confusing to you if you don't know what movies Bowie was in... or that Bowie had a film career at all.

Well, of course he did, my sweet, innocent baby lamb. Before Bowie tragically succumbed to cancer earlier this year, he had a hand in just about every facet of the creative world. He was just that magical. And it wasn't just one or two novelty appearances in a movie (although he has one or two novelty appearances in a movie, if you're into that kind of thing). Bowie's acting career included everything from short films to lending his sweet voice to a made-for-TV Spongebob movie. And all that aside, he made appearances in about 22 feature films.

Yes, that's certainly quite a lot to recap, but that's just all the more reason for us to take a brief journey through Bowie's more memorable roles.

1976: Thomas Jerome Newton In The Man Who Fell To Earth

Maybe it's the iconic orange hair or the fact that he's starring as a literal alien, but Bowie's first real starring role is also his most Bowie role to date. Definitely worth a watch if you're into some Ziggy Stardust-esque weirdness.

1986: Jareth The Goblin King In Labyrinth

Oh, God, yes. You're probably vaguely familiar with the head trip that is Labyrinth, a children's movie that is nothing but muppets and Bowie's prominent bulge. And while it's basically socially well-known how bizarre Labyrinth is, it really should be experienced for oneself if you've never actually seen it before.

1988: Pontius Pilate In The Last Temptation Of Christ

OK, so scared Catholic kids of my generation were decidedly traumatized by the likes of Mel Gibson's The Passion of the Christ. Before that, though, one of the most important Bible-adaptations was the Martin Scorsese-directed, Willem Dafoe-starring Last Temptation of Christ. Bowie showcased his more dramatic side as Pontius Pilate here, which is a really good part. In CCD, I always got stuck playing the Virgin Mary because of my name, but I really think I'm more of a Judas at heart.

1992: Phillip Jeffries In Twin Peaks: Fire Walk With Me

Incidentally, Bowie's part in the film (which is really just an all-over-the-place Laura Palmer-centric prequel to the Twin Peaks TV series) is pretty nominal overall. He pops up all stark-raving mad in an ill-fitting suit and a southern-ish accent, having disappeared for two years. It doesn't make much sense (much like the rest of the film), but it just warms my heart to know that Bowie and David Lynch joined forces on a project.

"I believe I might be of service." Um, best cameo of all time, or what?

Though Bowie's decidedly impressive acting career will constantly be eclipsed by his monumentally impressive music career, one thing is for certain: his legacy in the arts will live on forever. Hopefully in this clip of him singing with some power baby.

More like this
Lisa Marie Presley Reviewed Baz Luhrmann’s ‘Elvis’ Movie On Twitter
By Grace Wehniainen
'Dirty Dancing's Jennifer Grey Wants Harry Styles To Be The Sequel’s Love Interest
By Grace Wehniainen
Is Megan Fox Pregnant? MGK Gave A Shout-Out To Their “Unborn Child” Onstage
By Hugh McIntyre
Laura Dern Said “Cultural Awareness” Made Her Rethink This 'Jurassic Park' Fact
By Grace Wehniainen
Get Even More From Bustle — Sign Up For The Newsletter