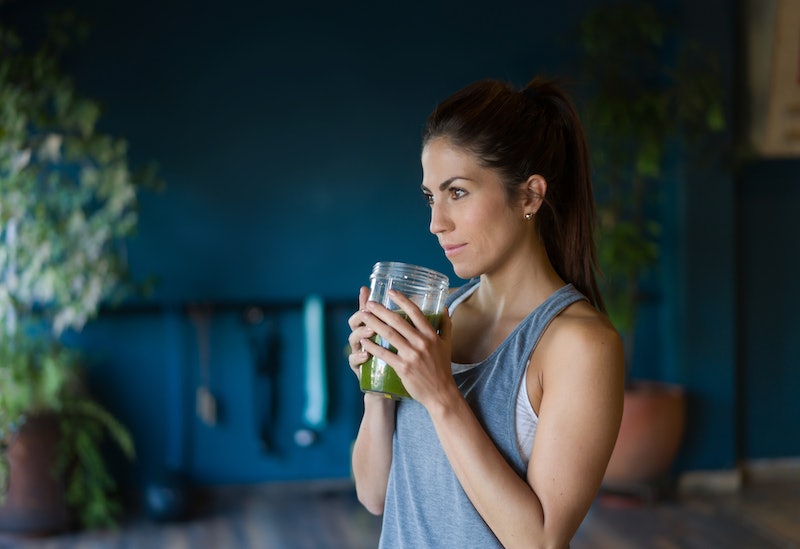 Most of us eat all the live long day. We snack at our desks, munch away in front of the TV, and never go to bed without partaking in our fourth meal. And yet, it's still really easy to be nutrient deficient.

It can seem impossible, what with all the eating we're always doing. But the thing is, we're consuming a lot of empty calories that don't offer much in the way of nutrition. Empty calorie foods are high in sugar or fat and not much else, according to Peter Jaret on WebMD.com. So sure, we're snacking away, but it's often on just that — snack foods. I'm talking about pretzels, candies, chips, and all the other delicious things we fill up on that are nutritionally void.

What we really need are nutrient-rich foods, such as vegetables, fruits, whole grains, and nuts, or else we're going to wind up deficient. In fact, the updated Dietary Guidelines for Americans singled out 10 nutrients that we may be missing. Four are so low in many people's diets that deficiency poses a real public health risk, noted Jaret. These include calcium, vitamin D, potassium, and fiber. Many of us are also low on six other key nutrients, which include vitamins A, C, E and K, along with choline and magnesium.

But even if you aren't a snacker, don't think this health risk doesn't apply to you. People who are on crash diets, as well as long-term vegetarians, may also be missing out on healthy nutrients. And when that's the case, the body has some pretty weird ways of showing it. Here are some (rather bizarre) signs that you're lacking in the vitamin and mineral department, and what you can do about it.

1. You Really Want To Eat Some Dirt (Yes, Really)

Sometimes when you're nutrient deficient, the body starts craving a specific food as a way of signaling what it needs. Like, if you're running low on vitamin C, you may suddenly have a strong hankering for delicious, ripe oranges.

But sometimes the body can crave some rather odd things, which is the case with pica. Pica is the abnormal desire to eat something that's not normally eaten — usually dirt, ice chips, or chalk. These cravings are pretty strong for the people who experience them, and yet no one really understands why it happens.

Author Sera L. Young offers one hypothesis in her book, "Craving Earth: Understanding Pica." Young suggested that it may be a way for people to get nutrients they are missing from their diet. This is especially the case with craving dirt and needing iron, noted Adam Kirsch on Salon.com. "This idea seems to be supported by the observed correlation between dirt eating and anemia: In fact, a Roman writer mentioned the connection between 'pale complexion' and 'a morbid appetite for earth' some 2,000 years ago," Kirsch said.

Unfortunately (fortunately?) eating dirt doesn't do anything to help anemia, nor does it eliminate those bizarre cravings. To truly fix an iron deficiency, you'll want to take an iron supplement, as well as ensure you're getting enough iron in your food, according to WebMD. And for the best results, take a vitamin C supplement at the same time, as it helps the body absorb more iron.

2. There Are Tingles In Your Hands And Feet

When you have tingling in your hands and feet, it's due to something called peripheral neuropathy, and it can be a really scary feeling. But before you freak out, consider that a vitamin deficiency may be to blame. "Peripheral neuropathy has several possible causes, among them a lack of vitamin B12," noted Joseph Pritchard on LiveStrong.com. That's because, according to the Mayo Clinic, B vitamins (B6, B9, B12), as well as vitamin E and niacin, are crucial to nerve health.

You'll want to eat foods chock full of B vitamins, such as fish, poultry, eggs, fortified cereals, and enriched soy or rice milk. But if that doesn't do the trick, ask your doctor about vitamin B12 shots.

3. The Corners Of Your Mouth Are Cracked

This could just be due to your unending Chapstick addiction, or it could be a sneaky sign of a vitamin deficiency. According to an article on the lifestyle website Details.com, you might get cracks in the corners of your mouth if you're a vegetarian who doesn't get enough iron, zinc, or B12. But this can also happen if you've been on a diet and have been skipping out on protein. So stop it right now with all of the above, and start adding some important foods back into your diet.

Eat lots of poultry, salmon, tuna, eggs, oysters and clams to get these beneficial nutrients. And if you're vegetarian, look for sun-dried tomatoes, Swiss chard, tahini, peanuts, and lentils. To enhance absorption of iron, take vitamin C like I said above, or add in C-rich foods broccoli, red bell peppers, kale, or cauliflower.

When you don't eat right, your body can't function properly. So it's really not surprising that a vitamin deficiency can leave you feeling like a puddle of mush on the floor. (Or, ya know, just a little bit more tired than usual.) This can especially be the case when you're lacking in vitamin D.

As Karla Walsh noted for Prevention, "While having a vitamin D deficiency can leave you feeling overly exhausted, even when you're able to get enough shut-eye, proper vitamin D intake helps you maintain power in every fiber of your being, whether you're young or old."

In fact, Harvard researchers have linked vitamin D supplementation with increased muscle control, resulting in 20 percent fewer falls among adults around 60 years old. Definitely something to keep in mind as you get older.

The cool thing about vitamin D is you don't need to rush off to the corner drugstore in search of some pills. All you need to do is step out into the light, since the body produces vitamin D when bare skin is exposed to sunlight, according to TheVitaminDCouncil.org. This is a natural (and free) way to get vitamin D, but you can also buy supplements, or add foods like fish oil, cheese, or egg yolks to your diet. "Within just six months of supplementation, D-linked muscle weakness can be eliminated, according to a Western Journal of Medicine study," Walsh said.

5. Your Hair Is Falling Out

If your hair is falling out, it can be a sign of any number of things. As Amanda Gardner noted on Health.com, thinning hair can be due to stress, pregnancy, hereditary baldness, hormones — really you name it, and it can probably make your hair fall out. But sometimes it's as simple as a nutrient deficiency. Namely, a protein deficiency.

It also has a lot to do with how well you are eating during hair growth phases. "At any given time, about 90 percent of your hair is in the growing phase. For each individual hair, this growing phase lasts two to three years. At the end of that time, hairs enter a resting phase that lasts about three months before they are shed and replaced by new hair," according to Joseph Saling on WebMD.com.

If you don't get enough protein, a disproportionate amount of hairs can go into the resting phase, and that can spell disastrous results for your tresses. "A typical scalp has about 120,000-150,000 strands of hair, and sheds about 50 to 100 strands of them each day. Most people don't even notice that small amount. But if an unusually large number of hairs enter the resting phase at the same time, hair loss can become noticeable," Saling said.

If your hair is falling out, it may be a sign that you need to eat more protein. Look for eggs, fish, and poultry. And for all you vegetarians out there, think about eating more peas, processed soy products, nuts, seeds, and beans.

6. You Get Painful Muscle Spasms

You know when you exercise a lot, sweat it out, and then keel over with a leg cramp? That's because your body is literally hurting for some nutrients that were lost during your workout. According to Esther Crain for Shape, "If you’re increasingly hit with painful muscle tightness and spasms, and it happens even when you’re moving around a lot, it may be a sign that your level of magnesium—a mineral that helps regulate body functions—is circling the drain." But again, it's an easy fix.

Get more magnesium in your diet from the likes of bananas, almonds, yogurt, dark leafy greens, and even chocolate (yay!).

A nutrient deficiency can make you feel pretty darn bad, so do your best to eat a varied diet full of colorful, healthy foods. And definitely talk with your doctor if you have any questions about your health.