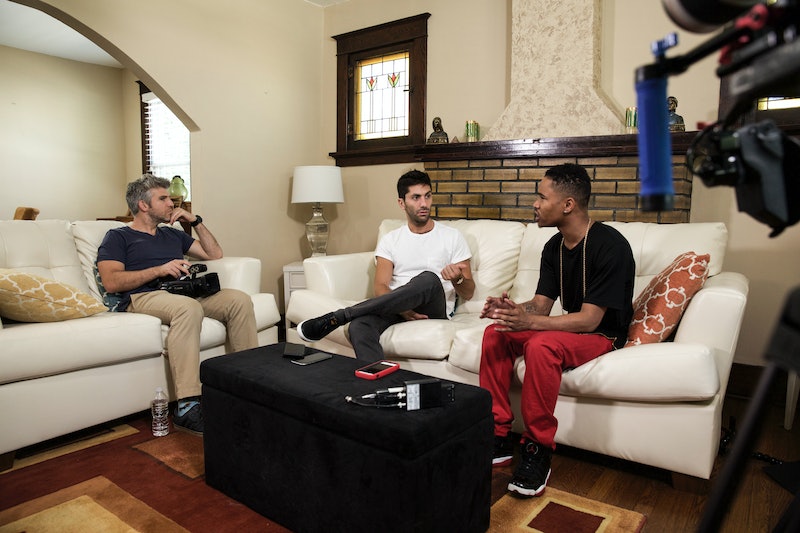 After six long months, it's finally time to embrace the return of Catfish into our lives. It's five seasons deep, and yet the MTV series still manages to surprise viewers. Take, for example, the way the show will be introducing Dejay, Malik, & Josiah, Catfish 's first love triangle, in the Season 5 premiere. As Nev says in the episode preview, it was only a matter of time before the show wound up getting a submission from two different people who had encountered the same Catfish. And whether "Josiah" is a fake online identity or just a guy who is two-timing people, it seems like Nev and Max are ready to figure it out. Armed only with reverse Google Image search and a wood-paneled iPhone, they'll get to the bottom of who exactly Josiah is.

According to both Dejay and Malik in the preview, things started like any typical Catfish episode with Josiah. After friending one another, both guys started an online-exclusive relationship with Josiah that became tumultuous — Nev describes both relationships as "on-again, off-again." And with at least one of the guys, Josiah admitted that he was initially using someone else's pictures and revealed his "real" appearance... but still was never willing to meet in real life. Here's everything we know so far about who Deray, Malik, and "Josiah."

There's More Than The Usual Drama

The full season trailer demonstrated that whenever Dejay and Malik confront the person behind the Josiah profile, it inspires some emotional reactions. But, unlike most Catfish episodes, it's actually possible that Josiah really is who he says he is (well, after revealing his "real" appearance) and they're upset that he was cheating on both of them.

Since Josiah already admitted that he's not the person in the pictures, and his identity is probably a different name, as well, he's basically impossible to find. Hopefully once we learn more about his real identity on Wednesday night, it'll be easier to see what Josiah has been up to since his Catfish confrontation.

Malik May Still Be Single

Malik still has a public Facebook and Instagram, and it looks like his IRL friends are pretty cute, so he shouldn't have any trouble finding someone in person if he wants to. But Malik also gets confessional on YouTube with some video diary entries where he vents about problems that he's having or talks through issues. Since he's still discussing relationship woes, he probably hasn't gotten a new boyfriend since his Catfish appearance.

You know how most people think of the perfect clever comment as soon as it's too late to say it? Dejay, evidently, can whip up the perfect one-liner on the spot.

No Matter What Happens, It Will Be A Catfish First

Whether Josiah turns out to be real, fake, two people, or five people, and no matter if Malik and Dejay team up, or decide to turn against one another, this three-person format ensures that the Catfish Season 5 premiere is going to be totally unique. Hold on to your tiny handheld cameras!