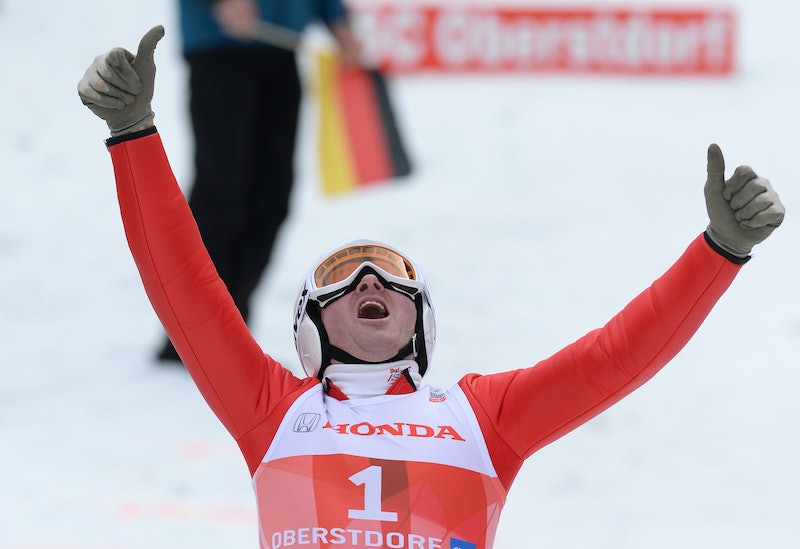 Ski jumping is a winter sport in which the participant shoots down a specialized ramp, is propelled off the end of it, soars through the sky over a steep snowy hill, and ideally lands as far as possible from the takeoff point without breaking anything in the process. I personally think that this sounds nothing short of terrifying, but enough people have been willing to do it that it's been a part of the Winter Olympics since their inception in 1924. But perhaps the most famous ski jumper of all time is Eddie "the Eagle" Edwards, upon whom the new movie Eddie the Eagle is based. Edwards set the record for Great Britain in Olympic ski jumping in 1988 and quickly grew to international fame. His story is coming back into the spotlight with the release of new biopic, but is his tale still unique? Has anyone broken Eddie Edwards' record since the 1988 games?

Actually, a lot of people have. Edwards' record was only a record because he was the first British ski jumper at the Olympics, and in fact was the only ski jumper representing Great Britain that year. For some perspective: as the movie shows, Edwards' performance at the Games was 55 meters off the normal hill and 71 meters off the large hill. The gold medalist that year, Matti Nykänen, achieved a distance of 229 meters off the normal hill and 224 off the large hill. Edwards' fame was therefore a result not of his athletic abilities, but of his resiliency and determination to compete even though he was an underdog. An impressive feat for sure, but here are some athletes whose actual ski jumping performances were a lot more impressive.

In February 2015, this Norwegian ski jumper set the world record for the longest ski jump, reaching a distance of 251.5 meters. But Fannemel still wants more; he told the BBC in 2015 that he would love to someday reach 300 meters.

Holding the female world record for longest jump is Austrian Daniela Iraschko-Stolz, who set her record of 200 meters on January 29th, 2003. She was also the first openly gay athlete to medal at the Sochi Olympics in 2014.

Ammann was the first man to win gold medals in both the normal hill and the lardge hill at two different Olympic games. He received the gold for both individual ski jumping events in both 2002 and 2010.

Finnish jumper Toni Nieminen was the youngest person to win a gold medal at the Winter Olympics, completing his medal-winning jump when he was a mere 16.

Although he doesn't consider himself a "professional ski jumper," according to The Daily Mail, Lambert holds the British record for longest ski jump at 93 meters.

This Austrian ski jumper holds the record for number of FIS World Cup victories, with 53 wins under his belt.

Although Eddie Edwards' physical jumps seem less amazing when compared to those of many other athletes around the world, his overall journey is certainly an inspiration.