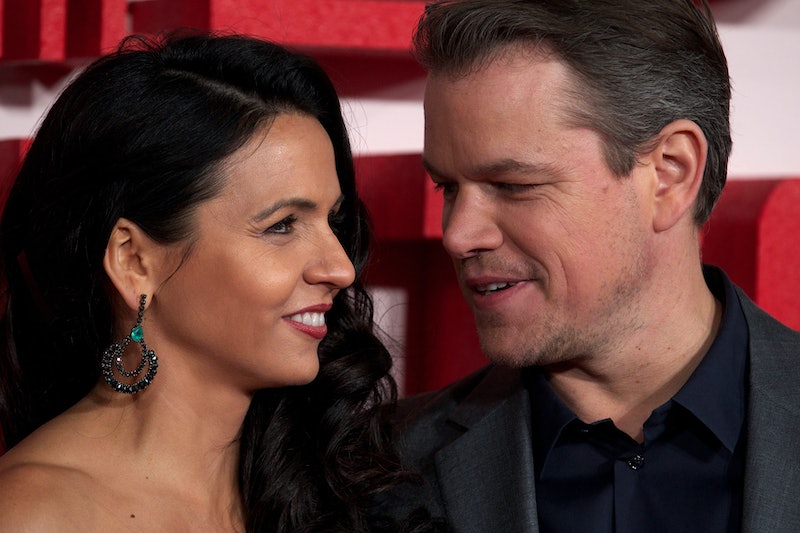 I don't know about you, but every time a celebrity couple announces their split, I get a bit sad. I know I don't know any of them personally (and, let's be real, I likely never will), and perhaps it's just the eternal optimist in me, but I never like to hear about a couple falling out of love. Celebrity divorces happen incredibly often, so when a famous couple manages to sidestep all of that drama and remain happily united year after year, it's wonderful. One such couple is A-list actor Matt Damon and his wife of over 10 (!!) years, Luciana Barroso. These two manage to fly quietly under the radar, but Damon has shared his thoughts about marriage and fatherhood over the years, and it's truly adorable.

Barroso and Damon seem to enjoy remaining out of the spotlight to raise their three daughters, Stella, Isabella and Gia, as well as Barroso's daughter from a previous relationship, Alexia, so it's rare (or, truthfully, close to impossible) that we ever hear any wild rumors about them. But Barroso and Damon, who met back in 2003, while she was bartending in Miami, have had a plethora of adorable moments cute enough to melt any celebrity marriage skeptic's heart.

When asked about good friend Ben Affleck's divorce from Jennifer Garner this past summer, Damon was blunt about his feelings on the matter, telling Entertainment Tonight:

I think marriage is insane. It's a crazy idea but I love being married to my wife. So I wouldn't tell anybody else about their relationship. But I'm lucky I found my wife. And I guess maybe, if there's any secret ... it's to feel lucky. So much of it is out of your hands. I mean, I just had that conversation with my father this weekend. He says the same thing to me. Says it's God's grace, is what he said. Because you just don't get lucky.

It's easy for Damon to gush about the impact that Barroso has had on his life. He told The Telegraph a sentiment that most twenty-somethings can definitely relate to, saying,

When I was in my twenties, I wondered if I would ever be able to settle down. But I found the right person and it was like getting struck by lightning — literally, everything changed in my life. Now I find the prospect of being single terrifying. My life is so much easier because of my wife and my marriage. Everything makes sense.

Damon told YourTango he has an easy solution to his hectic schedule and career when it comes to keeping his marriage at the forefront of his priorities, saying, "We have a two week rule. I'm not away for more than two weeks. I think you need to be with the person you love as much as possible. My wife is my soul mate. I don't like being apart from her." Agh, so sweet.

The A-list actor admits that it's been tough to watch friends (such as Affleck) deal with the intense scrutiny of the public eye, but he says he doesn't receive that level of attention for one simple reason: He's boring. He told The Guardian in 2013:

A lot of it boils down to luck: my wife's a civilian and that takes a lot of pressure off. It's really sex and scandal that moves those magazines [the tabloids], and there's nothing scandalous about a guy who's married and has kids. If they come outside where I live, they are going to die of boredom — there's just nothing really going on that would sell a magazine.

Damon didn't always think he would find his soulmate, telling The Hollywood Reporter :

I remember thinking, in my early 30s, that I wouldn't [get married], you know? I didn't think it was going to happen for me. My brother found his soul mate very young; he'd just turned 26 when they were married. He'd been married for 10 years by the time I even met my wife, and I looked at this really happy, wonderful marriage and kind of went, "I guess that's not going to happen for me." And then it did.

Happily ever after, indeed!

Damon and Barroso may keep their love pretty private, save for red carpet appearances and select interviews, but it's clear that they're basically the definition of relationship goals, and Damon's realistic views on marriage are easy for any married person (and a lot of people in general) to relate to.