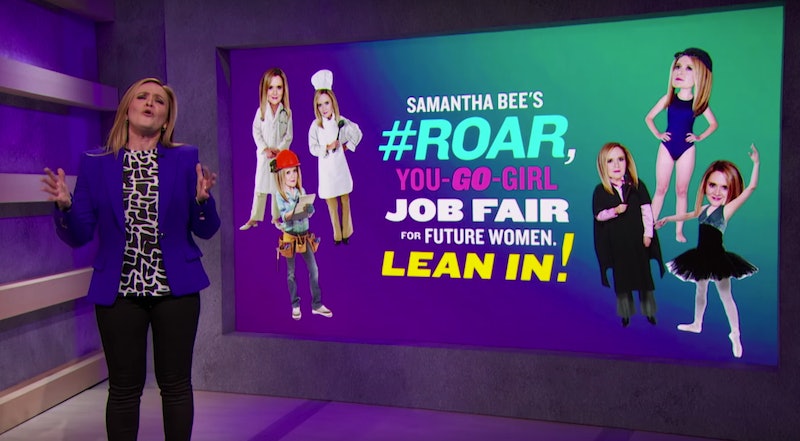 There are many benefits and reasons for having a female late night host — the first and foremost being "why not," and the third episode of TBS's new series proved yet again that Full Frontal With Samantha Bee can tackle material with added authority and extra hilarity. On Monday, Samantha Bee dug into workplace harassment with the Full Frontal segment "Samantha Bee's #ROAR, You-Go-Girl Job Fair For Future Women. Lean In!"

Because she's not only a female late night host, she's "also the female mother to two female daughters" and a "lady parent." The segment focuses on rape and sexual harassment specifically faced by park rangers, cruise ship employees, and comedians — three career fields so different, they indicate just how widespread this issue is. It makes the depressing but important point that though we may try to empower young girls to dream big and pursue exciting careers, they may face sexism and harassment throughout their lives.

What makes this segment special, besides the truth-telling of it all? It's all well and good for male comedians to call out sexism, and we've seen female contributors to do their own segments on these issues for male-driven programs. I don't want to negate any of the incredible work that Jessica Williams and Kristin Schall have been doing on The Daily Show. John Oliver has also been incredibly supportive and informative on his respective show. That said, there's something so refreshing about having this come from a woman on her own show.

You can watch the segment below, but slight warning: It does end with a song parody that discusses the specific case of rape on cruise shapes. It’s appropriate in tone for the segment, and the fact that this is a late night show hosted by a woman makes this a safe space to address important issues that women face through comedy, but the discussion of rape may be upsetting for some.

I would also like to repeat one of Bee's jokes, "It's not a lot of guys, #NotAllMen #PleaseDontLeaveUsMeanMessages" because it pertains to me, a female lady writer on the Internet, as well. It's just a systemic issue that comes up over and over again in workplaces that could not be more different. The way that Full Frontal highlights how inescapable sexual harassment is in the workplace is funny, poignant, and a good sign of what's to come with this new show.

More like this
Lydia Leonard Is Setting The Record Straight
By Olivia-Anne Cleary
'Bridgerton' Season 4 Will Likely Focus On This Brother's Divided Heart
By Grace Wehniainen and Alyssa Lapid
The Good Doctor Already Added 2 New Cast Members For Season 6
By Brad Witter
Will Vampire In The Garden Get A Season 2? What To Know
By Kadin Burnett
Get Even More From Bustle — Sign Up For The Newsletter