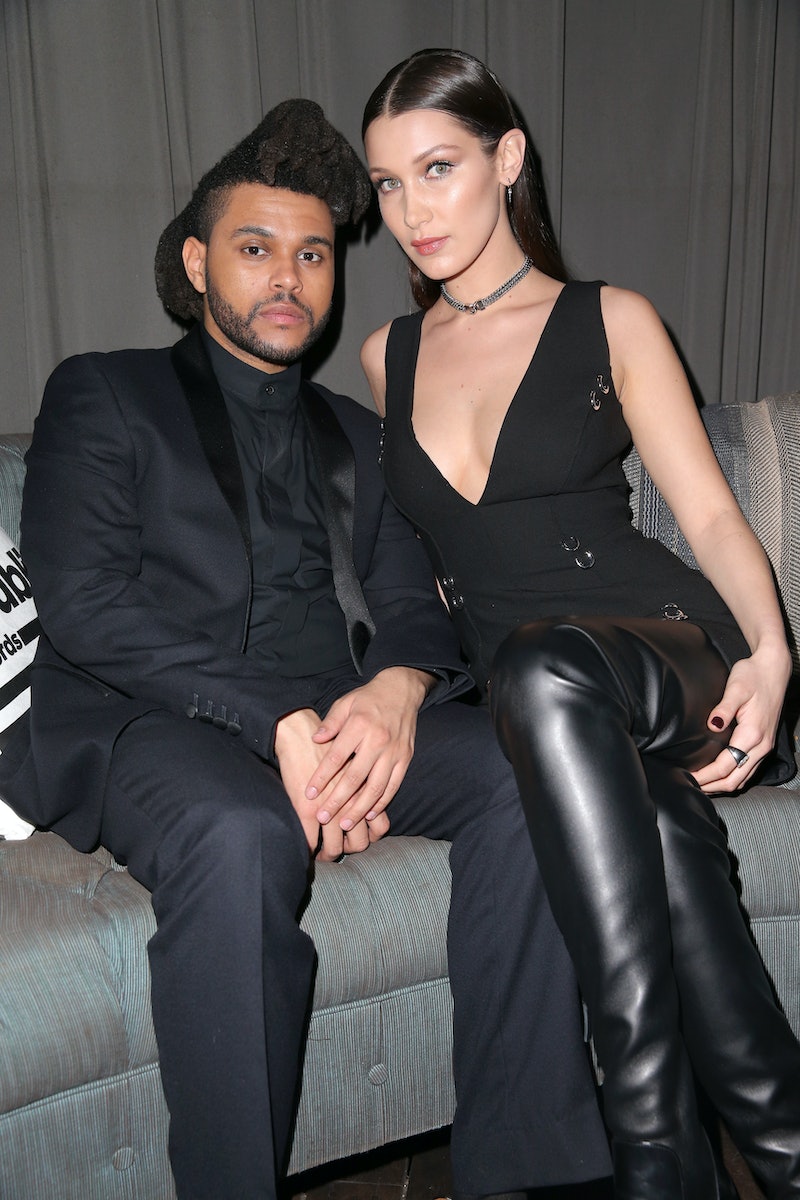 Summer 2015 was the season of many rumors surrounding now couple Bella Hadid and The Weeknd. At first, it was unclear if they were really dating, then the model and singer finally went public when they stepped out holding hands. Ever since then, they've been inseparable and have made it very clear that they are indeed in a relationship. Well, now there are even more rumors resulting in this very question: Are Bella Hadid and The Weeknd engaged?

Thanks to a Daily Mail article, reports are surfacing that the two are taking their relationship to the next level and all thanks to Hadid wearing a ring on that finger. While hanging out in London with The Weeknd, Hadid stepped out with a piece of jewelry on her ring finger, which obviously means they will soon be walking down the aisle. If you couldn't tell, that was pure sarcasm. Plus, Hadid's rep told the Daily Mail that she is not engaged.

There you have it: Hadid and The Weeknd are not engaged. Even though they aren't planning a wedding (at least right now), that doesn't mean the duo don't act like husband and wife. Maybe it's just preparation for when they do actually say "I do," but whatever the case, Hadid and The Weeknd act like a married couple from time to time. Check it out.

They Support One Another

Whether it's Hadid accompanying The Weeknd to the 2016 Grammys or the singer recognizing Hadid's talents and featuring her in his "In the Night" video, they support each other's careers and dreams. Even when The Weeknd was asked about Hadid training for the Olympics for equestrian events, he couldn't help but praise her. He told Rolling Stone, "I hope she does. I've never seen her do it, but word on the street is she's bangin' at it."

They Always Look Super In Love

I mean, just look at this photo from the 2016 Grammys. Seriously, could they be more into each other? They could easily be mistaken for a married couple. Also, there was one time Entertainment Tonight interviewed Hadid and she couldn't stop smiling while talking about him. Adorable.

They Compliment Each Other

If Hadid's birthday Instagram post for The Weeknd is any indication of their relationship, it's pretty clear how much they respect and admire one another.

They Hang Out With Family

When you're in a serious relationship (married or not), it's important to get along with your significant other's family. Well, that's clearly not a problem when it comes to The Weeknd hanging with Hadid's sister, Gigi Hadid.

Even though they aren't engaged at the moment, that doesn't mean Hadid and The Weeknd won't be taking the next step in their relationship soon.

More like this
Sanditon’s Theo James & Wife Ruth Kearney Are Embracing Family Life
By Aoife Hanna and Sabah Hussain
Britney Spears Met The Weeknd & Sam Levinson, So She May Actually Be On 'The Idol'
By Jake Viswanath
These Adorable Kourtney & Travis Moments Led Them To The Altar In Italy
By Bustle Editors
JoJo Fletcher & Jordan Rodgers Got Married In A “Playful & Fun” Wedding
By Grace Wehniainen
Get Even More From Bustle — Sign Up For The Newsletter