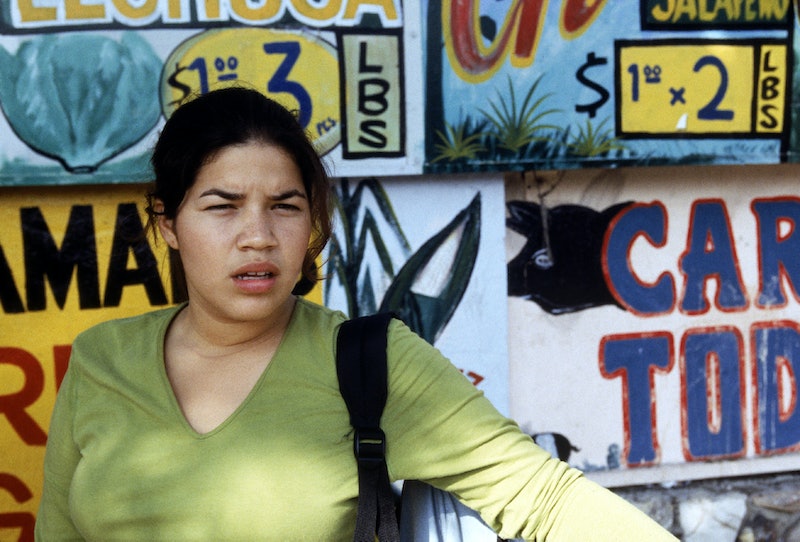 The first time I saw Real Women Have Curves, I was almost 13, overweight, watching obscene amounts of Gilmore Girls and Boy Meets World, and obsessing over Legolas and Harry Potter. Needless to say, there wasn't much out there in the movie world that a girl like me could relate to. To be honest, there still isn't. So when I heard about Real Women Have Curves and saw star America Ferrera, I knew that I had to see that movie. And when I finally did watch it, it changed my life: with Real Women Have Curves , I finally saw myself reflected on-screen.

On the surface, Real Women Have Curves is pretty much your average coming-of-age story. Ana (Ferrera) is a high school senior and first-generation American in a family of Mexican immigrants, ready to leave the next and go to college. If only her parents would support her. Her mother, Carmen (Lupe Ontiveros) is old-fashioned, and believes that Ana's time would be better spent working at the family dress factory, run by Ana's older sister, Estela, and losing weight so that she can find herself a good husband. The story might sound by the numbers, but it's more than that. Not only does Real Women Have Curves depict a young woman coming into her own, it explores the complex, inter-female relationships that often include criticism for one's life and appearance.

Watching Real Women Have Curves at 13, I saw a teenager constantly being shamed for her body, being told she was too fat to attract a man. It was like watching my greatest fears being reflected right back at me. Unlike me at the time, however, Ana doesn't believe what people tell her. She responds to the criticism by defying her mother and choosing to accept and love her body despite her mother's insistence that she shouldn't.

More than that, she inspires her sister and the women she works with in the factory to do the same, a movement that culminates in one of the most memorable scenes in the film, when the women, stuck in a hot factory steaming dresses, decide to take off their sweaty clothes to work comfortably in their underwear. Is it ridiculous? Maybe. A bit too on the nose? Perhaps. But it's also a rare image of non-supermodel sized women embracing their bodies in American cinema. I had never seen anything like it before on screen, and even now it's far too rare.

Not only did Real Women Have Curves give me hope that I could accept myself as an overweight young woman, but it also gave me a heroine I could relate to. It's not that I hadn't occasionally felt connected to characters in movies before. But I had never been able to relate to someone who actually looked like me — an overweight, non-white girl with dark hair and eyes — and who was going through the same things I was going through. Real Women Have Curves taught me that movies can actually be for me, that the women I looked up to on-screen weren't always going to be the narrow version of womanhood traditionally depicted in Hollywood.

I don't need to be able to see myself in all movies or television shows. But I didn't realize I never thought doing so was possible until it happened. For many people, relating to characters is a frequent occurrence, and make no mistake, it's a privilege. Real Women Have Curves changed my life when it gave me a taste of that privilege. And I'll never forget it.