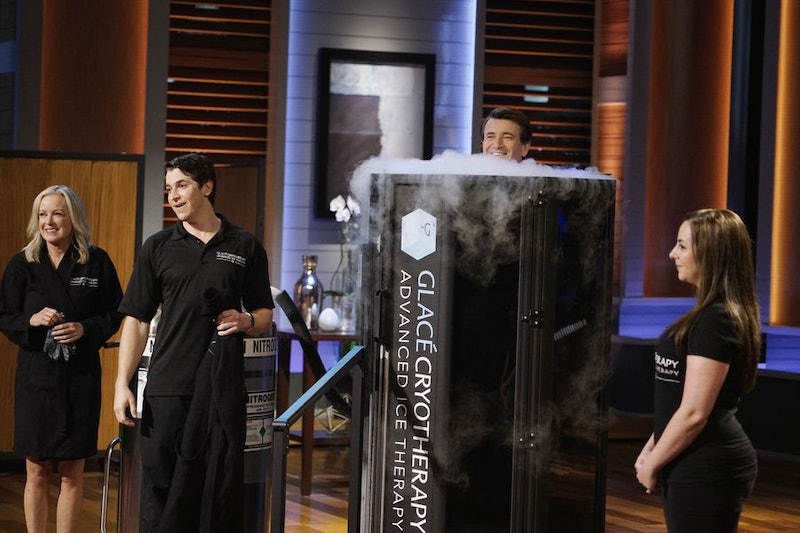 Many entrepreneurs have walked into the Shark Tank over the years with pitches for products that they purport to have a load of benefits to the health of consumers. So it's no surprise that the ABC reality series will again showcase another product like that. Glacé Cryotherapy will be one of the companies featured on Friday night's upcoming episode of Shark Tank , and it's available now to possibly change your life.

An investment from one or more Sharks is certainly going to help make that a reality. Kevin might not see the light, but the entrepreneurs behind Glacé Cryotherapy still have Mark Cuban, Barbara Corcoran, Lori Greiner, and Robert Herjavec to work with. If they keep it cool in the Shark Tank, they might just warm the hearts of these cold-blooded investors.

But what is cryotherapy exactly, and why would anyone want to do it in the first place? Learn about Glacé Cryotherapy below, and you might just be lining up to freeze your butt off next.

You Freeze Your Body To Help It

Glacé Cryotherapy offers whole body cryotherapy, which is a form of treatment in which you step into a chamber and have extremely cold, dry air blasted on your body for a couple of minutes. So yeah, it kind of looks like something out of a sci-fi movie, which is all the more reason why you'll feel so cool doing it. Cryotherapy was originally developed by Dr. Toshiro Yamauchi in 1978 to help treat rheumatoid arthritis. Along those lines, proponents of cryotherapy claim that undergoing the treatment provides a whole host of health benefits, which I'll get into more below. You didn't think it was just for fun, did you?

It May Be Good For You

The reason people subject themselves to standing in freezing temperatures for a couple of minutes at a time is because they find it can be beneficial to their health. Proponents of cryotherapy say that it can reduce inflammation, increase blood flow, alleviate pain, help with recovering from an injury, increase collagen production, tighten skin, increase energy, and improve your mood, according to Glacé Cryotherapy's website. However, cryotherapy has not been approved by the FDA. Some medical experts also don't think there has been enough research done on it, and what is out there is not that convincing of its benefits. So keep all of that in mind if you do decide to feel the freeze.

It's Not Available Everywhere Yet

And what do you know? Glacé Cryotherapy is indeed expanding to other cities in the United States in the very near future. The company is opening up a location in Las Vegas in March and one in Los Gatos, California in April, according to its website. Clearly, Glacé Cryotherapy is kicking some ice. Yeah, I said it.

The Founders Are Young And Hungry And Related

The brother-sister duo of Skyler Scarlett and Brittney Scarlett-Torres opened Glacé Cryotherapy at its first location in Carmel, California on October 15, 2014. After learning about cryotherapy in 2011, Skyler was inspired to go into this growing industry. Brittney came on board, and now the two hope to create "the first and best standard chain of retail Cryotherapy spas in the United States," according to Glacé Cryotherapy's website. Appearing on Shark Tank could definitely be the right step in that direction.

All The Cool Kids Are Doing It

Cryotherapy is a more recent trend and a little kooky, so of course celebs are partaking in it. As one might expect, many famous athletes have been known to hang out in a cryotherapy chamber, such as LeBron James, Michael Phelps, and Green Bay Packers linebacker Clay Matthews. However, everyone from Daniel Craig to Mandy Moore to Gigi Hadid have all been reported to have given cryotherapy a try, too. The Dallas Mavericks have also been big fans of cryotherapy in the past, which means Mark, who owns the NBA team, might be the perfect partner for Glacé Cryotherapy.

We'll have to wait and see when Friday night's episode airs whether he thinks Glacé Cryotherapy is super cool or if he gives it the cold shoulder.