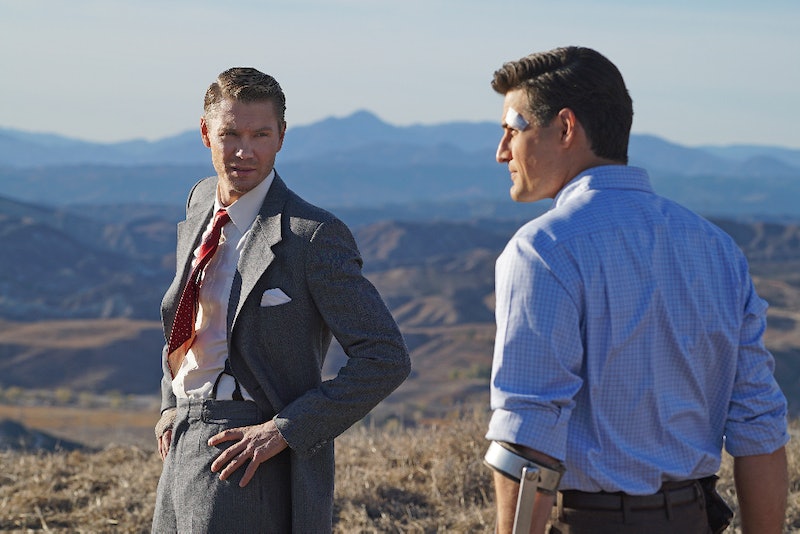 Never in a million years, or more accurately 17 episodes, did I think Chad Michael Murray's character on Agent Carter would cause my head to spin with such confusion. The penultimate episode of Season 2 was quite the roller coaster, and not just because my Jarvis family feelings and Peggy 'shipping feelings and Angie Martinelli feelings are spiraling our of control. In Tueday's second episode, Jack Thompson betrayed Agent Carter — at least, I think he did, and it definitely wasn't the Hydra-tastic way I thought he was going to. The episode ended with Jack and Peggy in a stand-off, and I'm honestly worried about what will happen next.

We don't even know what Thompson really wants, or who he's loyal to. I thought he was on Vernon Masters' side at first. Then at one point, he was on Peggy and Sousa's side. Later he tricked Whitney Frost into thinking he was not only on her side, but wanted a seat on the evil, definitely Hydra though it hasn't been stated explicitly, Council of Nine. Then he revealed that he had his own plan all around. I suppose that Thompson is on his own side, or at least what he believes loyalty to the the SSR means.

In an effort to save Dr. Wilkes and stop Whitney Frost, my new favorite character Dr. Samberly created a device using gamma ray technology — which is very dangerous, as fans of Bruce Banner already know. However, Thompson had him secretly turn it into a bomb, with the hopes that it would knock out Whitney Frost, Vernon Masters, and Jason Wilkes (who is not only bulging with zero matter but also threatened to kill Peggy in order to escape back to Whitney) in one fell swoop. Quick question, is Wilkes innocent? I want him to be innocent. I like that Peggy believes in his goodness, though I simultaneously loved that he shut down her hopes that he was not acting his own volition. Everything is complicated.

The important thing is that Thompson and Peggy fundamentally disagree in how this situation should be dealt with, and are now holding guns to one another's heads. Peggy wants to bring the bad guys to justice, Thompson wants to bring the justice himself. That's also interesting because, while the situation is clearly different, I think that might put Peggy Carter on Team Iron Man in Captain America: Civil War. Don't hold me to that; it's just a thought. Thompson also uncovered a secret war crime — is that going to come back on Agent Carter? I can't believe there's only one episode left this season. A Seaosn 3 renewal can not come soon enough.