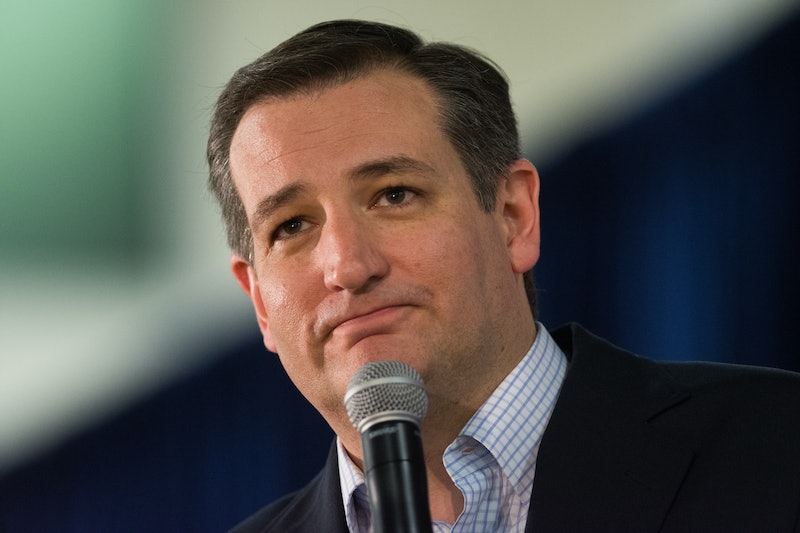 The final results of the highly disorganized Nevada Republican caucus are still being counted, but guess who's already piped in with his thoughts on the night? That's right, Texas Senator Ted Cruz. Donald Trump is the winner of the caucuses, dealing yet another blow to Cruz's fledgling campaign. However, in keeping with the standard set by 2016 rival Marco Rubio, Cruz presented his performance in Nevada as, well, a good thing! Ted Cruz's Nevada speech was clearly intended to convince his supporters — and maybe some in the media — that he still has a legitimate shot at the nomination.

In truth, it wasn't that surprising, because Team Cruz was openly trying to build this narrative before the voting was even finished. As the caucuses were underway, a source on the Cruz campaign told CNN that the campaign would be happy with a "third-place win." Third-place, of course, isn't a win at all, but hey, you play the hand you're dealt, right?

In this, Cruz was taking a page from the Rubio playbook. In the Iowa caucuses, Rubio came in third place, and yet he nevertheless gave a speech depicting himself as the winner of the night. It actually worked, kind of: In the days after the vote, many news outlets rushed to declare Rubio "the real winner" in Iowa.

As the Nevada results were being counted, Cruz took to the stage and spoke to supporters, declaring that the results had served the function of "narrowing the race" and "presenting a clear choice" to conservative voters.

If you are one of the 65 percent of Republicans across the country that doesn't think Donald is the best candidate to go head to head with Hillary, who believes we do better in elections when we actually nominate a conservative, then the first four states have performed a vital function of narrowing this race and presenting a clear choice. You can choose between two Washington deal makers, or one proven, consistent conservative.

On other hand, if you want a president that says no to the bipartisan corruption in Washington, that stands up to the lobbyists and special interests, that stands up to the debt, that says we will not bankrupt our kids and grandkids, we will bring back millions of high paying jobs, we will see wages going up, we will make young people coming out of school have three, four, five job offers, and we will ensure that our kids and grandkids have a brighter tomorrow, a greater future, a more bountiful America.

That's what this choice is about. I want to thank the great people of Nevada and I wanna say, I cannot wait to get home to the great state of Texas. Tonight, I'll sleep in my bed for the first time in a month, and then it will be back to the campaign trail in Texas and all across Super Tuesday, energizing and building that Reagan coalition, those courageous conservatives, libertarians, evangelicals, young people, and Reagan Democrats, all coming together.

That's a pretty rosy-eyed interpretation of the results. But make no mistake: This was not a good night for Cruz.