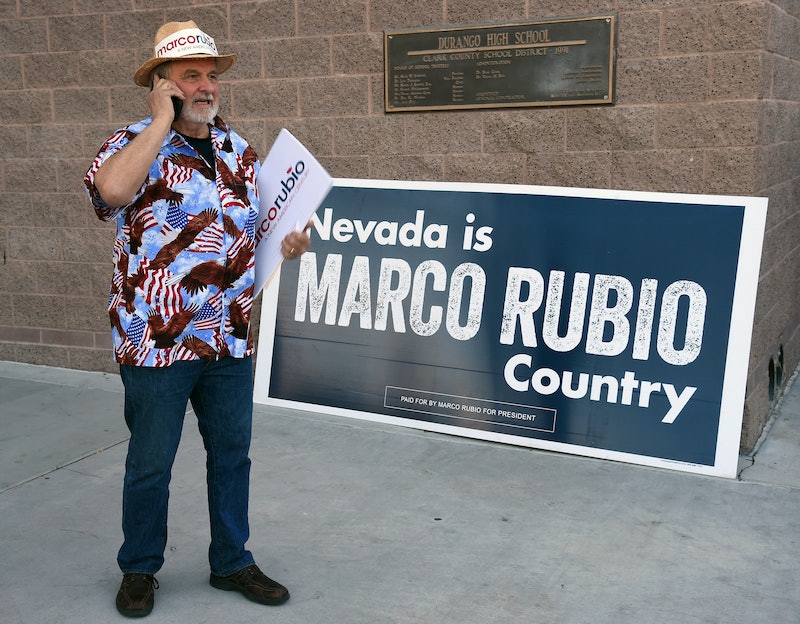 The GOP Nevada Caucus has been mired in controversy since sites opened and lines began forming. Just because caucus locations have closed doesn't mean the oddities of the event have completely wrapped up, however. The Republican Party has come up with a head-scratching way to report results as caucus workers begin to tally ballots and brace for a potentially long night ahead. All caucus locations will be reporting their results via the Nevada GOP caucus' crazy text message rule, which stipulates that a photo of the results must be texted to Clark County GOP Chairman Ed Williams. Even more curiously, the results will only be accepted if they are written on an envelope.

If there's anything that caucuses have taught us this election season, it's that the events have far more quirks than their primary counterparts. The Iowa Caucus had tiebreakers decided based off a coin flip, while Nevada's Democratic Caucus tiebreakers were decided based off the luck of the draw. (Nevada's playing card system feels fairly appropriate for a state known for its casinos and gambling pursuits.) But the text message system is simply confounding. It stands out in more ways than one — mostly because it's a major upgrade from the previous caucus reporting system. During the state's 2012 caucus, officials were reportedly forced to email the results in the form of Excel spreadsheets to state party heads.

Excel spreadsheets have most likely been retired henceforth, as the system was incredibly error-prone and led to a lengthier final tallying process due to formatting issues. The Nevada GOP made history in 2012 when the party announced the final results via their Twitter account. It's unclear whether they will be using the same technique when releasing this year's GOP Nevada caucus results, though this election season's heavy media interest almost makes such a revelation inconsequential. Within minutes of caucus locations beginning to report, CNN, The Associated Press, and NBC News all called the winner of the GOP Nevada Caucus as being none other than Trump.

The results have come quickly, though this may not be the last that voters hear from the GOP Nevada Caucus. Claims of voter fraud and caucus locations running out of ballots have emerged, though they have been countered by the Republican Party. Nonetheless, the party has vowed to look at master voter lists and heavily scrutinize the results coming in. Such a dominating win from the Donald certainly negates the odd practice of texting caucus location results a bit. Hopefully the quirky caucus goes no further than texts and fails to adopt a Snapchat model or worse. Then again, anything can happen at the Nevada caucuses, it seems.