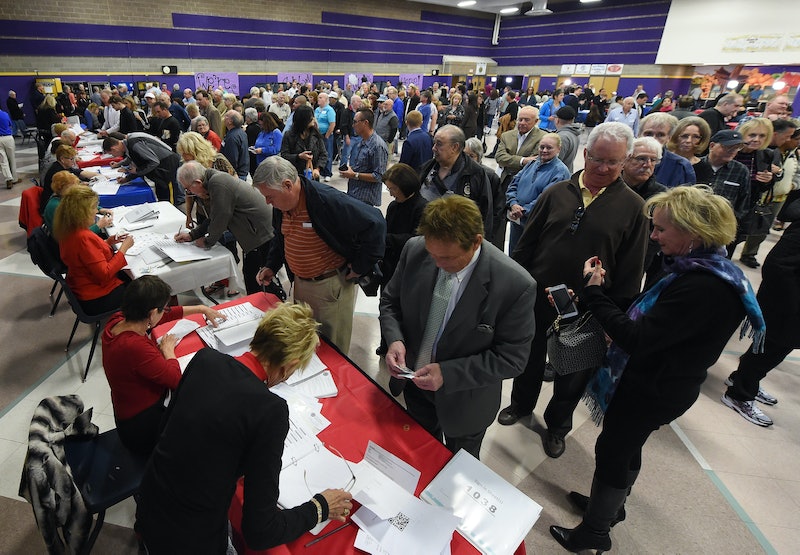 At this point, nothing about Donald Trump should surprise you — including the fact that he won Nevada's GOP caucus on Tuesday night. Right around midnight on the East Coast, Trump was projected to have won the "first in the west" caucus by a YUGE margin, bringing an uneasy end to a controversial evening. Complaints and criticism rocked the caucus throughout the evening, with much of the controversy surrounding Trump and his supporters, as usual.

Then again, this controversy shouldn't surprise you, either. As perhaps the most outspoken and politically incorrect candidate in recent history, Trump has raised red flags among a fair share of the population. Unfortunately for that share of the population, that's apparently not who caucused on Tuesday in Nevada.

Early vote counts showed that Trump won Nevada easily with more than 40 percent of the vote. Again, this isn't terribly surprising, particularly if you paid attention to the polls — as I'm sure Trump wanted you to — before the caucus. In fact, Trump had the same share of the vote in the early vote counts that he did in the pre-caucus polls: 42 percent. Still, there was speculation that Trump's anti-immigration rhetoric could have hurt him in Nevada, where the Latino vote is crucial. Clearly, such rhetoric didn't affect him too poorly.

Heading into the Nevada caucus, Trump had already won key primary victories in New Hampshire and South Carolina. Adding Nevada to that list isn't just significant because of the delegates he picked up, but also because Trump has now won over three very diverse populations of Republican voters. New Hampshire is known for pushing candidates to be more genuine and to spend more intimate time with them. It's debatable whether or not Trump indulged New Hampshire the way other candidates did, but there's no denying that he was genuine and honest with them, given his politically incorrect and blunt nature. South Carolina, on the other hand, is known for conservative, evangelical voters, along with its significant black population and military service members. Trump was initially expected to struggle among evangelical voters, but he won the Palmetto State without too much trouble. Finally, Nevada is known for diversity in a different way, with Hispanics and Mormons making up significant portions of the voting-eligible population.

So, then, what is surprising about Trump's victory in the Silver State? First, although Trump was favored in the polls, there were relatively few polls published ahead of Nevada's GOP caucus, particularly compared with how many polls have been focused on Iowa, New Hampshire, and South Carolina. Second, Nevada was considered one of the states Florida Sen. Marco Rubio had a pretty good shot at. Rubio, who was projected to come in second when the votes first started coming in, spent several years of his childhood in Nevada.

With Nevada as Trump's latest victory, anything seems possible in the remainder of the GOP primary race. Trump has proven that he can win in states that are diverse in population and in geographic region. Next, Trump and his fellow Republican candidates will look ahead to the so-called "Super Tuesday" primaries and caucuses, which will take place in 16 states across the country on March 1.