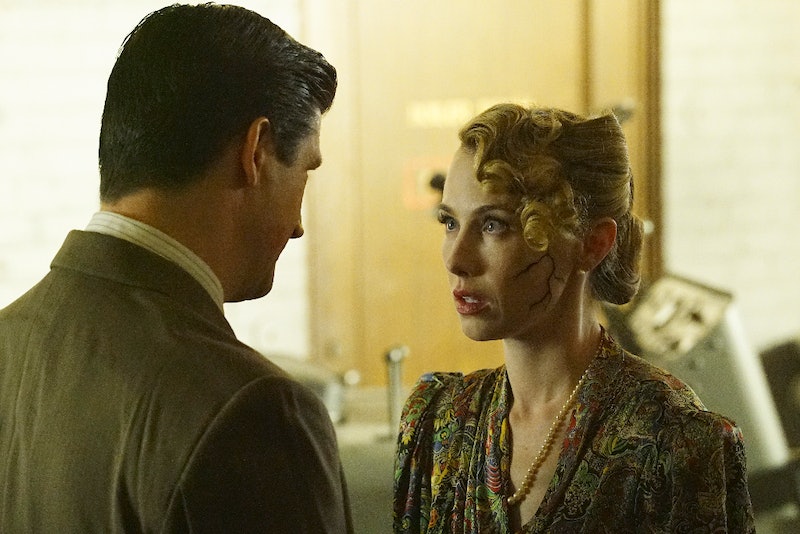 Remember the bubbly Dr. Wilkes who just wanted to share his science wine with Peggy Carter? I miss that dork. On Tuesday, Jason Wilkes exploded into Zero Matter on Agent Carter. After he and Whitney Frost tried to recreate the experiment that caused the substance, he got sucked into the void — then returned with so much Zero Matter bursting from his skin that Whitney Frost tried to steal it, which only made matters worse.

Is he dead? He wasn't in the promo for next week, but considering this character's history, that means nothing. The last time this happened, he just went incorporeal. Honestly, I doubt he's gone for good. He's a series regular, so he's listed in the official ABC press release for the Season 2 finale "Hollywood Ending" no matter what. But if getting struck in the first explosion and then getting sucked up into a black hole of "space goop," as Daniel Sousa put it, didn't kill Dr. Wilkes, I think he's going to be okay. Since we did see Whitney Frost in the promos for the season finale, the only person who's probably dead as a result of Wilkes' big kaboom is Vernon Masters, but then again who knows? Zero Matter clearly works in mysterious ways.

What's really unfortunate is that I think this means the Peggy and Jason 'ship has sunk, and not under the most pleasant circumstances. In an effort to save himself, Wilkes teamed up with Frost and ended up threatening Peggy's life. That's not a very attractive quality! Don't get me wrong, I'm Team Sousa all the way, but I don't want Jason to end up evil or dead. Hopefully Jason's dalliances with Zero Matter won't completely destroy his character.

Finally, another important question, asked by Whitney at the end of Tuesday's first episode, is why was Jason chosen over her to go into the Zero Matter itself? He floated up like an angel, or a superhero. We know that Whitney Frost is the Marvel character Madame Masque, but maybe Jason Wilkes has a destiny on Agent Carter that we don't know yet.